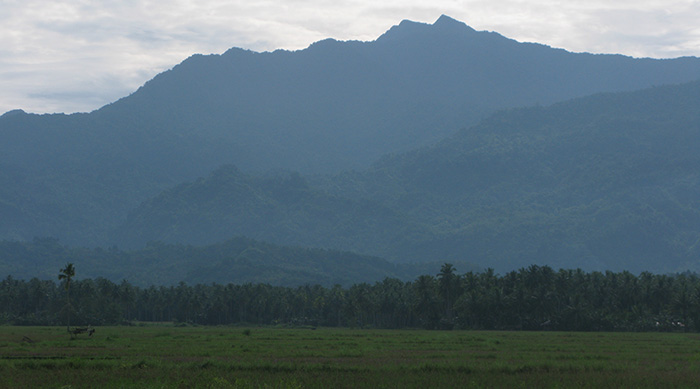 LAWRENCE — Colonial plunder, crime, tribal factions, sectarianism, drug running, piracy, animal poaching, illegal logging and destructive mining practices — all of which add up to wholesale environmental exploitation. The island of Mindanao in the southern Philippines has seen it all and more. 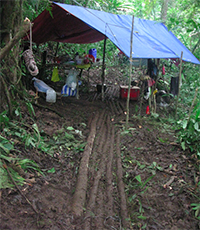 “Mindanao has about 22 totally separate ethnolinguistic groups, who speak maybe 70 languages — culturally, it’s incredibly complex and diverse,” said Rafe Brown, curator-in-charge of herpetology at the University of Kansas Biodiversity Institute. “Colliding cultures have butted heads for 500 years or more. Historically there has been tension between the national Catholic government and Muslim regional government, and the cultural interests of numerous indigenous peoples’ groups also underlie conflict over natural resources. Mindanao has extensive mineral resources and forests with valuable timber. Tropical rainforest soils are also very fertile, making the lowlands attractive to agribusiness. There’s been conflict over those resources for hundreds of years.”

If the island seems like a daunting locale to conduct biological research, that’s because it is. Brown recently took part in an expedition into the mountains of Mindanao to carry out a biological survey of the area’s fauna, bringing KU graduate students along for the challenging fieldwork with scientists from Father Saturnino Urios University, the University of Oklahoma, the National Museum of the Philippines and Silliman University.

Brown, a world-renowned herpetologist who focuses on southeast Asia, said the risks inherent in the work are worthwhile because he values international collaboration so much and because Mindanao is a treasure house of biodiversity.

“The Philippine archipelago is recognized as a globally significant conservation priority — a biodiversity hotspot,” he said. “For example, 95 percent of Mindanao’s amphibians don’t appear anywhere else in the world. The terrestrial biodiversity of the Philippines is amazing, and this part of Mindanao is the center of the center of that diversity. The biodiversity is so high in this one pocket of northeast Mindanao, largely because the ranges of so many species in the archipelago overlap in this one area. We knew it was really diverse, but we didn’t have a sense of this one area being the bull’s-eye, the epicenter of this diversity.”

As a result of the expedition in Mindanao, the research team has published a new paper in the online open-access journal ZooKeys detailing their findings: a total of 126 species, including 40 frogs, one caecilian, 49 lizards, 35 snakes, a freshwater turtle and a crocodile.

Their discoveries, making up 36 percent of the total known Philippine reptiles and amphibians, were the result of genetic and morphological analysis, international collaboration and, above all, rigorous fieldwork. Much of the expedition was carried out on mountains, as extensive logging has destroyed the lion’s share of old-growth forest on Mindanao’s lowlands.

“Mindanao is a place where unfortunately the original forest cover was more than 85 percent, but now it’s down to 6 percent original forest, and 15 percent is second-growth vegetation,” Brown said. “Giant U.S. logging operations made it big under the Marcos administration. They deforested Mindanao in about 40 years. Mindanao formerly supported incredibly diverse forests with trees as big around as your house standing 250 feet tall. I saw a bit of it left in Cotabato in 1991 during my first trip to the Philippines, before it was cut down in the early '90s.”

To prepare for the expedition, first Brown and collaborators from local universities met with local authorities, tribal leaders, hunters, police and military for advice and to ensure the safety of the research team, a process he calls “ground proofing.” Then, Brown’s research team hiked up one of the biggest mountains on Mindanao.

“On Mount Hilong-hilong, we established camps at 300, 900 and 1,200 meters,” he said. “We were there for three-and-a-half weeks, then moved to the next mountain range over, where we surveyed Mount Lumot. Once we get up, we set up tents and put our traps along trails created by animals. Every expedition is a training opportunity for the participants, and we’re all anxious to learn new skills from each other. The researchers from the U.S. are trained to go out with shovels and potato rakes and machetes, actively searching habitats of target species. We typically dig around tree trunks looking for animals that live underground. We search rivers and streams, turning over rocks, splitting open decaying logs looking for lizards or frogs. We climb trees, looking for tree-dwelling lizards, or place pitfall traps in the ground to catch lizards and small snakes that live in the leaf litter. We also use sticky traps like people use to catch pests in homes.”

Brown and his team also rely on indigenous knowledge of each area’s biodiversity and techniques for locating elusive animals.

“On these expeditions, we also found that different tribal groups have unique and ingenious means of catching forest animals,” he said. “For example, a master hunter taught us how to make a variety of traps and snares from vines and rattan. And with his techniques, we captured species of rodents and lizards that we never caught by any other means.”

Aside from passive traps, KU researchers and their Filipino collaborators spent a great deal of their time searching for animals in the dark.

“The longer distances are traversed at night, when we walk in groups through the forest on trails, actively looking for nocturnal animals on the ground, along rivers and up in trees, using powerful head lamps. This is one of the most important pieces of equipment we have, a really strong head lamp. Without the right light, we’d be in trouble.”

For Brown, the research work on Mindanao harkens back a century to when KU Professor Edward Harrison Taylor, called the “Father of Philippine herpetology,” performed years of fieldwork in the same part of Mindanao, discovering many of the 120 species he described in his career. Indeed, Brown and his Filipino collaborators have spent considerable time and effort, throughout the Philippines, trying to rediscover species first discovered and formally described by Taylor but over the last century pushed toward extinction by the ensuing deforestation.

“We like to think back to Taylor, a century ago, who would go out ‘herping’ by himself with a kerosene lantern, carrying it above his head with one hand, while grabbing lizards with the other. It’s difficult to imagine how he collected as many specimens as he did,” Brown said. “But his legacy, the published record and the many well-preserved specimens in museums around the world formed the foundation of Philippine herpetology. That legacy has been an inspiration to three or four generations of Filipino and American students who followed in his footsteps, all the while emphasizing partnership and collaboration between our historically linked countries.”

Photos, from top: A view of Mount Hilong-hilong, a muddy day at Professor Rafe Brown's campsite, research collaborators at work. Species, from top: The Oligodon maculatus, the Gonocephalus interruptus and the Rh.bimaculatus. Photos courtesy Rafe Brown.