LAWRENCE — A gift of more than $1.3 million from the estate of University of Kansas alumni Perry Rashleigh and Rosemary Jones Rashleigh will create five Rashleigh Family Scholarships for students in medicine, nursing, pharmacy, math and English. 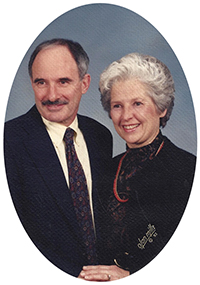 The schools of Medicine, Nursing and Pharmacy each will receive 25 percent of the gift for scholarships. The final 25 percent will be divided in half for students majoring in math and English in the College of Liberal Arts & Sciences. The scholarships, created through KU Endowment, reflect the Rashleighs’ areas of study and interests.

“Providing opportunities to others who needed help was important to my parents,” said Jennifer Jones Rashleigh of Tiverton, Rhode Island. “They were both honest, hardworking and fair.  They valued education and were forever grateful to KU for the scholarships they received that made their college educations possible.  They never forgot the opportunity given to them and always planned to pay it forward.”

Chancellor Douglas A. Girod said the scholarships would help worthy students in many areas of the university, making education affordable when it might not be otherwise.

“The Rashleighs were loyal Jayhawk alumni who left a legacy to their alma mater. The scholarships they created will provide opportunities for generations of students in a broad range of academic pursuits,” Girod said. “Their generosity will put a KU education within reach for more deserving students, and for that we are truly grateful.”

Perry Rashleigh died in May 2017, and he spent more than 40 years in Grand Junction, Colorado. He was married for 48 years to his wife, Rosemary Jones Rashleigh, who died in 2006. 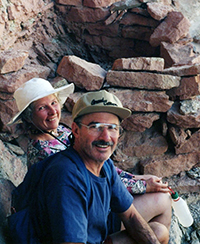 Both Perry and Rosemary were Kansas natives. Perry was born in Garden Plain and moved to Little River as a boy; Rosemary was born in Goodland and moved with her family to the tiny town of Timken as a child. Both of them came from accomplished families in rural communities, and they were avid learners. They were both valedictorians of their high school classes before going to KU.

“They were so proud to go to KU,” Jennifer said. “They talked about college as being a magical place. Both of them cherished their education.”

Perry Rashleigh lived in Battenfeld Scholarship Hall and received his bachelor’s degree in pharmacy at KU in 1956. He entered that program because he considered the pharmacist in his hometown of Little River the most important job in town. When he graduated, a professor told him he should apply to medical school — so he did. While earning his medical degree, he met Rosemary Jones, a student in mathematics and English who lived in Watkins Scholarship Hall.

“Mom and Dad met when she asked if she could see a cadaver,” Jennifer said. “So, they joked that they met over a dead body.”

They were married in 1958; she received her bachelor’s degree in 1959, and Perry went on to receive his medical degree with honors from KU Medical Center in 1960. They were raised to be proud Jayhawks; Rosemary’s sister Martha Jones Clyde recalled, “The Rock Chalk chant was the first song we ever learned to sing as children.”

Rosemary worked as an engineering assistant at AT&T right after graduation and helped put Perry through medical school.  While raising their children — Suzanne, Stephen, Jennifer and Johnathan — she was also a voracious reader, a pilot and an active community member. She volunteered on the boards for the local library and her church among other civic endeavors, and she was a member of the Colorado 21st Judicial Nominating Commission.

A stint in the Air Force took the Rashleighs to Utah, Nebraska, Texas and back to Kansas, where Perry practiced family medicine. He moved his family to Colorado, completed his residency in dermatology at the University of Colorado School of Medicine and settled in Grand Junction. He founded Mountain West Dermatology and was one of only two dermatologists in the western part of the state.

Sharing his knowledge was important to Perry. For 30 years, he proudly participated in the St. Mary’s Family Medicine Residency Program in Grand Junction and earned the Teacher of the Year honor in the program in 1995. He and Rosemary supported several causes in the Grand Junction area, including the Mesa County Library, the Marillac Clinic and St. Mary’s Medical Center, which named him Philanthropist of the Year in 2013.

Perhaps his greatest love outside of medicine and his family was gardening. His flowers, plants and vegetables were well-known and much appreciated by their recipients.

“He would be up with the sun and would work in the garden for 3 or 4 hours before he went to the office,” Jennifer said. “The farm boy in him never left. He just loved to grow things.”