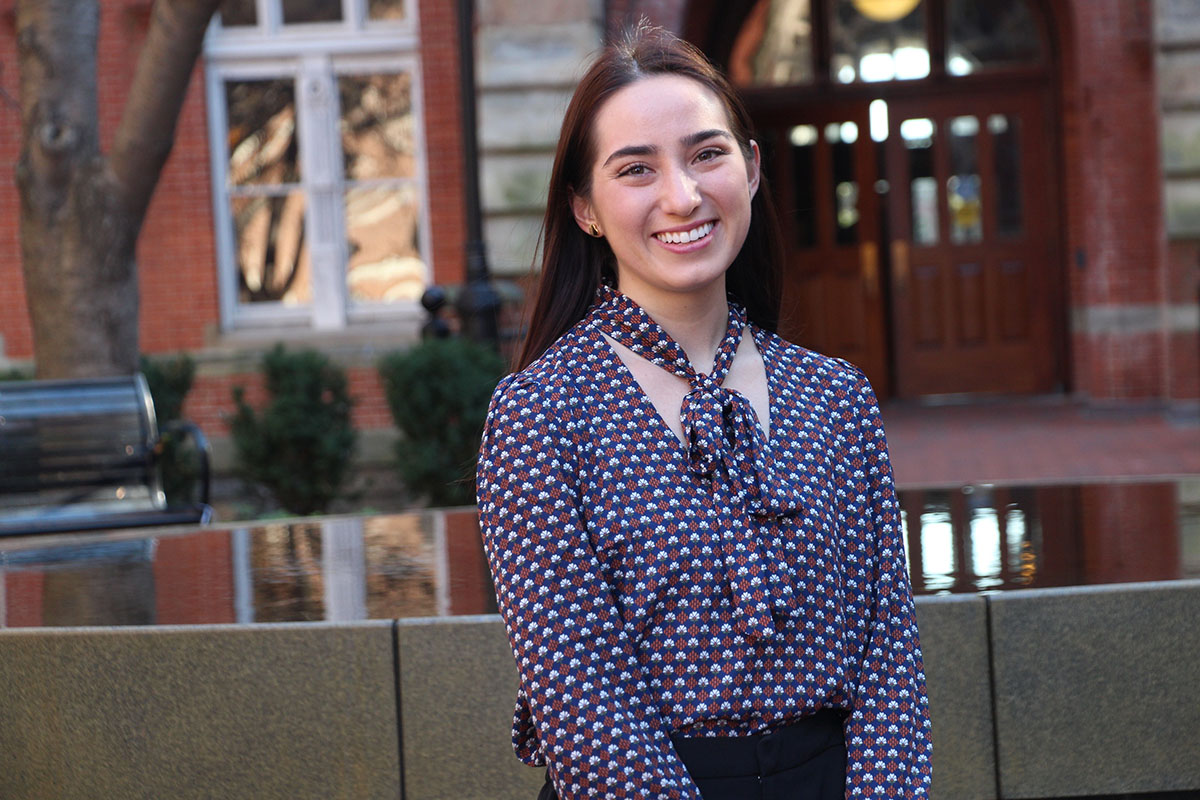 LAWRENCE — As someone who grew up in Costa Rica with family in rural Kansas and studied and worked in countries like China, Catalina Wedman said she has come to see the importance and the value of people of different cultures finding common ground and ways to talk to each other.

And now, as the university’s second student to earn the Charles B. Rangel Fellowship, the KU senior will receive up to $95,000 in benefits to prepare her for a career in the U.S. Foreign Service.

“As an American citizen, it is my honor to do this type of work. It’s something I always wanted to do ever since I was in Costa Rica. I just didn’t know it had a name,” Wedman said. “I’m really excited to have this opportunity to further my skills so that I can be the kind of diplomat Americans deserve.”

Wedman grew up in Cartago, Costa Rica, and is the daughter of Patricia Alfaro of Cartago and Michael Wedman of Harper. She came to KU after receiving her associate’s degree from Johnson County Community College.

“The world is so connected. If you don’t have people that actually want to hear and understand each other, there’s no way for us to move forward,” Wedman said.

Rangel Fellows receive support for a two-year master’s degree in an area of relevance to the Foreign Service and extensive professional development opportunities, including internships, mentors and skills training.

Wedman will also intern with a member of Congress on issues related to foreign affairs in the summer of 2020, and in the summer of 2021, the U.S. State Department will send her overseas to intern in a U.S. embassy or consulate to get hands-on experience in the field.

The Rangel Fellowship is funded by the U.S. Department of State and is administered by Howard University.

At KU, Wedman is studying Spanish, with a minor in political science and global & international studies.

Wedman worked with KU’s Office of Fellowships in preparing her application. Students who are interested in applying for the Rangel or similar awards in the future are encouraged to contact the office by email at fellowships@ku.edu.

Wedman said she was grateful for assistance from many who helped her at KU, including through several scholarship and fellowship programs. One of those programs, the KU TRIO McNair Scholars Program, assists low-income, first-generation and underrepresented minority students as they prepare for doctoral study.

Mulu Lemma, director of KU’s McNair Scholars Program, worked directly with Wedman through the program and praised Wedman’s ability to juggle multiple responsibilities and her drive to succeed.

“Catalina has constructed a diverse and well-rounded academic experience through engagement with rigorous research, study abroad and civic engagement. Beyond that, she has accomplished all this while working nearly full time and supporting her family,” Lemma said. “She stands out for her sincere conviction about the good of humanity and the capacity each individual has to empathize and relate with people different than them. Thanks to this belief and her tenacious work ethic, I know she will make a significant contribution both in her field and in society at large.”

Catalina Wedman, originally from Cartago, Costa Rica, is the daughter of Patricia Alfaro of Cartago and Michael Wedman of Harper, and she is a graduate of Liceo Experimental Bilingue José Figueres Ferrer. Wedman is a transfer student to KU, having received associate's degrees in liberal arts and general studies at Johnson County Community College. At JCCC, Wedman worked as an admissions ambassador and as the lead student assistant for International and Immigrant Student Services. She has volunteered as a teaching assistant for English Language Learners in Johnson County and also at a school in Xi’an, China, where she studied abroad for a semester. At KU, Wedman is a member of the University Honors Program and the McNair Scholars Program. She completed a research fellowship with the Foreign Military Studies Office last May and is currently a Foreign Language and Area Studies Fellow. She is a scholar with the Intelligence Community Center for Academic Excellence at KU and currently serves as an Intercountry Adoptions Student Trainee at U.S. Citizenship and Immigration Services.