LAWRENCE — Nelson Mosley, a law enforcement professional with more than 30 years of experience, will be the new chief of police and director of the Office of Public Safety for the University of Kansas. Mosley is joining KU from the Rose Hill Police Department in Butler County, where he has served as chief for the past five years.

“I’m truly impressed with the leadership, courage and compassion that Nelson Mosley has displayed over the course of his career,” said Mike Rounds, vice provost for Human Resources, Public Safety and Operations. “Nelson brings experience working with students in an educational setting, as well as experience in crisis intervention and management, delivery of mental health first aid and a track record of prioritizing diversity. I believe he will be an exceptional champion for the interests and needs of our campus community.” 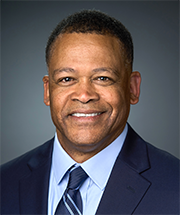 Mosley has been an adjunct professor in the field of criminal justice and law enforcement at both Wichita State University and Butler Community College. He has served as an Equal Employment Opportunity trainer for the city of Wichita, the city of Andover and the Wichita Police Department. He also worked as a trainer on ethics, diversity and racial profiling for the Wichita Police Department.

After earning an associate’s degree from Butler Community College, Mosley earned a bachelor’s degree in human resources management and a master’s degree in management, both from Friends University. His professional training includes the FBI National Academy, the Chief Executive Leadership Course of the Southern Police Institute and Leadership Wichita. He is a certified Kansas Peace Officer and serves as the current president of the Kansas Association of Chiefs of Police.

“I am humbled and honored to have been selected as the next police chief for the University of Kansas,” Mosley said. “I’m excited about joining the KU community and look forward to partnering with students, faculty and staff as we work toward a community responsive public safety model. I have an open-door policy and welcome continued dialogue on the topic of police-community relations.”

The chief of police and director of public safety at KU is responsible for providing leadership and direction for all operations of the Office of Public Safety. Mosley is tasked with formulating a strategic vision and mission for the department, developing policies, and making policy and procedural decisions of the department related to the operation and delivery of police services and the security of the university. The office implements procedures for enforcement of agency regulations, state and federal laws, and local ordinances. In his new position, Mosley is expected to work toward creating a diverse staff that contributes to a campuswide culture of care and helps everyone in the KU community feel they belong.

“I believe law enforcement professionals have a responsibility to better our agencies by building community trust, enhancing our relationships and being accountable while treating all people with dignity and respect,” Mosley said. “I thank KU for this opportunity and am ready to get to work as a Jayhawk.”

Mosley is taking on the position following the announced retirement of Police Chief Chris Keary, a longtime veteran of the KU Public Safety Office. Keary began as a student dispatcher while working on his degree at KU. He served in several roles within KU Public Safety before being selected as chief of police in 2016.

As part of the hiring process for chief of police, Mosley is undergoing and must clear a KBI background check that is more extensive than those required of all new KU employees. Mosley also is expected to remain current in training hours and law enforcement certification through the Kansas Commission on Peace Officers’ Standards and Training (KSCPOST) as required by Kansas Statute.

“I appreciate the hard work of the search committee and its chair, Callie Long, in identifying a candidate who not only meets the preferred qualifications, but who exceeds them and brings with him a documented commitment to advocacy for students and the community,” Rounds said. “I also want to thank Chief Keary for his years of service and leadership at the university. I wish him all the best in his retirement.”