LAWRENCE – Rain Pryor, daughter of the late famed comedian Richard Pryor, will visit the University of Kansas to screen a documentary about seeking her identity in the shadow of celebrity, as well as a black Jewish woman. 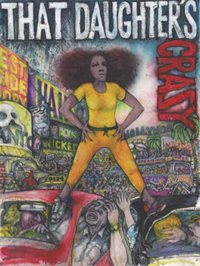 She is the subject of “That Daughter’s Crazy,” which will be shown at 7 p.m. Tuesday, Oct. 27, at Woodruff Auditorium in the Kansas Union. Pryor will be in attendance to discuss the film and her life and career. In addition to the screening, she and film producer Daryl Sledge will be the guests at a Lunch and Learn conversation at noon Oct. 27 at Sabatini Multicultural Resource Center, 1299 Oread Ave.

Both events are free and open to the public.

Rain Pryor has in some ways followed in her father’s footsteps, becoming a stand-up comedian and actress. The documentary, however, also shows her awareness of her father’s struggles with drug and alcohol abuse as a cautionary tale.

Richard Pryor, who died in 2005, was widely known as one of the most influential modern comedians. He tackled issues of race and contemporary issues with no holds barred in content or language.

“That Daughter’s Crazy” uses scenes from Pryor’s one-woman stage show, “Fried Chicken and Latkes,” mixed with interviews from Rain Pryor, her grandmother and her mother to open a window into the life as one of Richard Pryor’s children.

“I wasn’t black enough to be black, I’m not white enough to be white. … Unique wasn’t in yet,” Pryor said in press materials for the film.