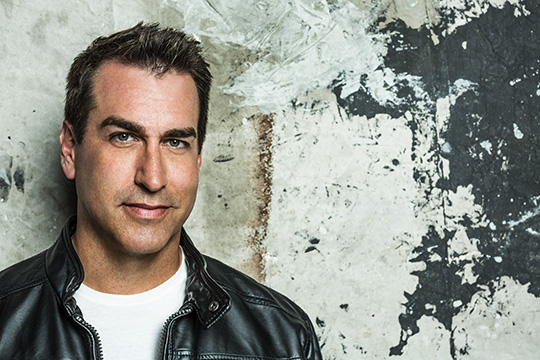 LAWRENCE — Rob Riggle, one of the most recognizable Jayhawk alumni, will be honored this year with the 2018 Distinguished Alumni Award from the College of Liberal Arts & Sciences at the University of Kansas. He will visit Lawrence in November to accept the award.

Riggle has forged two distinct and notable careers since graduating from KU in 1992 with a bachelor's degree in theatre and film. Following a career with the U.S. Marine Corps, during which he rose to the rank of lieutenant colonel, Riggle has become well-known in comedic films and television. He is also known for his philanthropic efforts and as an enthusiastic fan of KU.

“Rob Riggle’s accomplished and varied career exemplifies the many paths open to graduates with a well-rounded education in the liberal arts and sciences,” said Clarence Lang, interim dean of the College. “We are pleased to recognize him and welcome him back to campus.”

The College will host “An Evening with Rob Riggle” at 7:30 p.m. Nov. 2 at the Burge Union. Tickets are required and free. They are available at the Kansas Union. More details on tickets and the event are available online.

In a Q&A with the College, Riggle shared how his KU education has been of value in his career.

“My theatre and film degree helped me tremendously in pursuing my dreams,” he said. “Unless you’re going to specialize in a certain field, like medicine or accounting, I think you should seek an education that is well-rounded. You should seek social and emotional intelligence as well as academic intelligence.”

Riggle is familiar to filmgoers and TV fans alike for comedic roles in films such as “The Hangover” and “Step Brothers,” as well as his stints on “Saturday Night Live” and as a correspondent on “The Daily Show with Jon Stewart.” His most recent film appearance is in “Night School” with Kevin Hart, which debuted at the top of the box office this fall. On the small screen, Riggle has most recently appeared in “Rob Riggle’s Ski Master Academy,” available on Sony Crackle. For his voice-over talents, he earned a 2012 Emmy nomination for Outstanding Voice-Over Performance for Disney’s “Prep & Landing: Naughty vs. Nice.”

He is one of KU’s most well-known fans, appearing regularly at football and basketball games. During KU’s appearance last spring in the NCAA Final Four against Villanova, Riggle was the sideline reporter on the Kansas TeamCast broadcast on TNT. He hosted KU’s Late Night in the Phog in 2013 and served as the grand marshal of the KU Homecoming Parade in 2014. Sports fans may also know Riggle from the “Riggle’s Picks” skits during NFL coverage on FOX, or his podcast of the same name.

In addition to maintaining close connections to KU, Riggle has kept close ties in the Kansas City area. He is a founder of the Big Slick Celebrity Weekend in Kansas City, an annual fundraising event that benefits Children’s Mercy. He and other celebrity hosts, several with ties to Kansas City, have raised more than $6 million since the initial event in 2010. Riggle grew up in Overland Park and attended Shawnee Mission South High School.

As he broke into comedy, Riggle was still on active duty with the Marine Corps, which he initially joined at the age of 19. Riggle served in various countries, including Albania, Kosovo, Liberia and Afghanistan. He retired from the Marine Corps Reserve, having served 23 years total (nine years active duty, 14 years in the reserves) and earned more than 22 medals and ribbons. This fall, he will also be recognized by the Iraq and Afghanistan Veterans of America (IAVA) with the 2018 IAVA Veteran Leadership Award.

As the largest academic unit with the most alumni, students and faculty, the College of Liberal Arts & Sciences is the heart of KU. The College has recognized more than 50 liberal arts and sciences graduates with its Distinguished Alumni Award since 1996. Alumni have been honored for accomplishments across a span of career paths, including public and military service, business, arts, medicine, entertainment and publishing, and research. The full list can be viewed at http://college.ku.edu/distinguished-alumni.