LAWRENCE – A University of Kansas student took home the top prize at the 2021 Yale Hindi Debate competition on April 9. Sydney Pritchard, a sophomore in linguistics from Lawrence, earned the win in the “Non-native, Non-heritage category” at the event, which draws students from colleges including Yale, Notre Dame, Harvard, UCLA and other top universities.

The second-year Hindi student was coached and guided by Patrica Sabarwal, a lecturer in Hindi in the Department of East Asian Languages and Cultures, and Angela Anthony, Fulbright Language Teaching Assistant (FLTA). Pritchard is the first Jayhawk to finish at the top since Srishti Sharma placed first in the “Heritage” category in 2018. 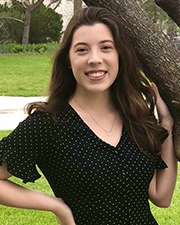 “Being in Hindi Yale Debate has opened up a whole new side of me,” Pritchard said. “I never thought I would be speaking in front of a whole group of people and getting the chance to showcase my language skills on a national level. I felt encouraged by my family and friends as well as having an amazing support system from my instructor, Patrica Sabarwal, and my FLTA, Angela Anthony.”

Sabarwal noted that Yale Hindi Debate requires nearly two months of preparation from the student, the FTLA and the lead instructor.

“It is a very difficult platform to compete on and win,” Sabarwal said. “I am extremely proud of Sydney for rising to this occasion and performing at a level that was clearly unmatched. I would also like to thank the Hindi FLTA, Angela Anthony, who contributed significantly to the whole process."

For more information about EALC at KU, visit the Department of East Asian Languages & Cultures. The department is part of KU’s College of Liberal Arts & Sciences. As the heart of KU, the College is educating the most students, producing the most research and collaborating with nearly every entity at KU. The College is home to more than 50 departments, programs and centers, as well as the School of the Arts and School of Public Affairs & Administration.