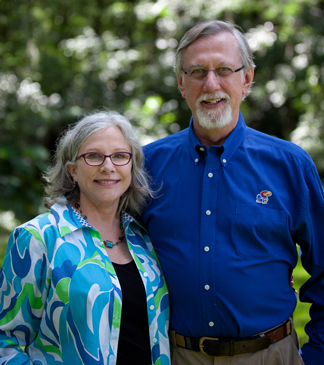 LAWRENCE — The opioid crisis has brought heightened attention to the effects of addiction on individuals, families and communities. As health practitioners, politicians and families grapple with solutions, the University of Kansas is establishing a new resource in the region to better understand and treat addiction in its many forms.

With a $2 million gift from KU alumnus Daniel Logan and his wife, Gladys Cofrin, KU will launch the Cofrin-Logan Center for Addiction Research & Treatment. The center will serve as a hub for addictions research, training and outreach, bringing together practitioners and services from KU’s Lawrence campus and KU Medical Center, as well as community partners.

Advancing recovery and making it available to those who need it is an exciting prospect for Logan and Cofrin, and it’s the true inspiration behind their gift.

“The essence of treating addiction is about giving people hope,” Logan said. “Part of what having a center like this does is give the opportunity to have hope that things can be different and you don’t have to be stuck in that place.”

The center is a partnership built on shared interests between Cofrin and Logan and Carl Lejuez, interim provost and executive vice chancellor. Both Cofrin and Logan are in recovery from addictions themselves and know firsthand the importance of fighting the stigma associated with addiction and making effective treatment options more available and accessible. Lejuez brings firsthand knowledge of developing an addictions center from the ground up as the founder and director of a highly successful addictions research and treatment center at University of Maryland, before he came to KU as dean of the College of Liberal Arts & Sciences in 2016.

“KU is known for the rigor of the research conducted, but not just research for its own sake,” Lejuez said. “We want to show how it’s making the communities in Kansas a better place, and that’s by helping the people of our state. This gift allows us to do both research and treat the community without having to carve out new resources.”

A devoted Jayhawk, Logan said it was an easy decision for him to establish the center at KU.

“I owe KU a lot. I know I wouldn’t be where I am today if I hadn’t gone to KU. It was a fabulous experience for me and really opened up the world,” he said.

The center will be part of the Department of Psychology in the College of Liberal Arts & Sciences. Services will include therapy, support groups and community outreach, with many initiatives already in development. Several programs focused on addictions ranging from alcohol to drugs to gambling to eating disorders will be launched and announced later this fall.

The center is not the first time Logan and Cofrin have given back to KU through philanthropy. In 2015, they established a scholarship for students with exceptional need who live in scholarship halls, with preference to students who live in Battenfeld Hall, where Logan lived when he was an undergraduate at KU. The scholarship is named for his parents, Philip and Joann Logan.

Logan grew up in Topeka and received a bachelor’s degree in political science from KU in 1975. He went to medical school at Baylor College of Medicine in Houston and graduated in 1978. Logan started an internship at KU Medical Center in Wichita in obstetrics and gynecology, and he finished at the Mayo Clinic’s Graduate School of Medicine in 1981. He went on to work in emergency medicine in community hospitals small and large for 25 years before moving into academia as a staff physician, assistant director and department chair. He was board certified in emergency medicine. He has five children who live all over the country, including in Lawrence.

Logan came to the Florida Recovery Center at the University of Florida in 2006 for a fellowship in addiction medicine and is currently a professor in the Addiction Medicine Division at the College of Medicine at the University of Florida. That’s where he and Cofrin met: She was on the alumni board of the Florida Recovery Center during Logan’s fellowship.

Cofrin is a native Floridian from Gainesville and has a bachelor of science degree from the University of Florida. She also received her dual master’s and specialist’s degrees in counseling education from the Department of Counselor Education at the University of Florida. In 2010, Cofrin retired after nearly 30 years from her position as a therapist with the Alachua County Crisis Center in Gainesville.

Therapy will be a key part of the center, in both groups and on an individual basis. From Cofrin’s own experience, personally and professionally, she said, both are equally important.

“Personally,  through group therapy, I was able to see that I had similar issues to others in the program, and individually I got to really zero in on my specific issues,” Cofrin said. “From a professional perspective, I've seen what both modalities can do for patients. When I first started practicing I was skeptical about the necessity of group work, thinking individual therapy would cover all the bases. As I became more confident and skilled, I saw just how powerful a tool group therapy really is. There's nothing like having your peers challenge you to heal.”

Logan added that the specificity of addiction therapy made it essential. “Addiction therapy involves special skills,” he said. “Part of the advantage of the center is getting the professionals the appropriate training so they are adept at dealing with individuals with addiction.”

The Center and Department of Psychology are part of the KU College of Liberal Arts & Sciences. The College is the heart of KU, educating the most students, producing the most research and collaborating with nearly every entity at KU. The College is home to more than 50 departments, programs and centers, as well as the School of the Arts, School of Literatures, Languages & Cultures and School of Public Affairs & Administration.