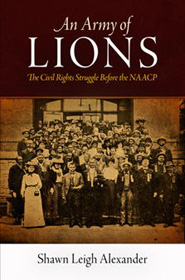 LAWRENCE — Ask history students to name the nation’s first civil rights organization, and most will answer with the NAACP, formed in 1909, or possibly the Niagara Movement of 1905. Few know much about the Afro-American League of 1890.

Shawn Alexander, University of Kansas assistant professor, argues in his new book, “An Army of Lions: The Civil Rights Struggle Before the NAACP,” that the Afro-American League’s short history and successes have been obscured in American history due in part to a focus on individuals rather than organizations.

Yet the League’s use of the courts to enforce citizenship rights provided by the 14th Amendment and voting rights in the 15th Amendment and its work to end racial violence “created the hard-line activists that would become the backbone of the NAACP,” Alexander said.

The driving force behind the Afro-American League was newspaper editor T. Thomas Fortune (1856-1928). Known as the dean of black journalism, Fortune wrote editorials and books calling for Afro-Americans – the term he preferred -- to unite, to agitate and to organize to protect their rights and to end the racial violence and segregation that characterized the period from 1880 through the first decade of the 20th century.

“In those few years, the League and its successor, the Council, had set a precedent for challenging discrimination in the courts and protesting racial violence,” Alexander noted.

Further, the growing system of Jim Crow and unmitigated racial violence was being reinforced by an increasing number of “scientific’’ studies of race and ethnicity that suggested racism was justified, Alexander added.

“African American activists responded to this white supremacy in numerous ways, but only one organization, the Afro-American Council, stood in firm opposition to this racial Armageddon. Building on the model [of] the Afro-American League, the Council was an organization based in local and state branches throughout the country whose mandate was to fight not only racism…but to contest discrimination and mob violence working through the local, state and federal courts and legislatures.”

The Council didn’t survive for several reasons, including the inability to gain mass support partly due to cost of membership and the lack of a national press voice. Further, the League, and later the Council, suffered from personality disputes, including distrust of Booker T. Washington’s support, and leadership struggles.

By 1909, after a 1908 race riot in Springfield, Ill., a call went out to form a new organization that would become the NAACP. Many of the NAACP’s Committee of 40 original founders had been members of the Afro-American League, the Afro-American Council or other groups that Alexander discusses that preceded the NAACP.

The Committee of 40 included individuals such as W.E.B. Du Bois and Ida B. Wells-Barnett, both of whom had been members of the Afro-American Council. Du Bois had in fact served as director of the Council’s business bureau before he established the Niagara Movement. Much earlier both Du Bois and Wells, at different times, had worked for and with Fortune at the New York Age.

Fortune had been born into slavery in Florida. Before entering journalism, he had studied law at Howard University. Fortune’s career included serving as a special envoy to the Philippines and Hawaii under President Theodore Roosevelt. In his later years, Fortune suffered personal problems including a nervous breakdown, malaria and alcoholism.

“Too many scholars discredit Fortune’s role because of his alcoholism,” Alexander added. “Yet Du Bois defended Fortune as a beacon of protest who had little support.”

“An Army of Lions” was released this winter by UPenn Press. Alexander is also editor of an anthology of Fortune’s writings, “T. Thomas Fortune, the Afro-American Agitator.” He is currently writing a history of the 1871-72 Ku Klux Klan hearings and a biography of W.E.B. Du Bois, focusing on his formative years.

RT @kulifespan : KU researchers will look at the lasting impact of COVID-19 stress on student behavior and mental health and "how a newly de…
«»
Follow us on Twitter »
Why KU
Apply »
One of 34 U.S. public institutions in the prestigious Association of American Universities
44 nationally ranked graduate programs.
—U.S. News & World Report
Top 50 nationwide for size of library collection.
—ALA
5th nationwide for service to veterans —"Best for Vets: Colleges," Military Times