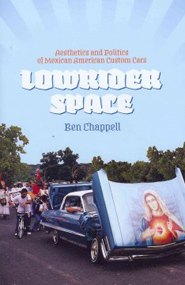 "That's the really distinctive thing for lowriders," said Ben Chappell, assistant professor of American studies at the University of Kansas. "If you have a hydraulic suspension, you can actually make the car bounce, you can ride on three wheels, you can do all kinds of tricks that really make it stand out in traffic or at a car show. That's the signature modification that defines a lowrider."

Chappell recently published "Lowrider Space: Aesthetics and Politics of Mexican American Custom Cars" with the University of Texas Press. The book explores the lowrider phenomenon through the lens of Chappell's own experiences with car clubs and cruising around Austin, Texas, as well as through his training as an anthropologist.

"I was interested in the everyday life of lowriding, and people who do it for themselves," he said. "There's a kind of ethos that you should build your own car — you shouldn't buy it already customized. The car should be an expression of the owner, and you have to work to build and maintain it. So working on cars and sharing knowledge is a big part of it. People will barter labor and parts. There's a really extensive social network around lowriding."

According to the KU researcher, lowriding has its roots in Mexican-American culture in the Southwest dating back to the 1950s, and it is loaded with political and cultural identification that can signify both rebellion and a sense of belonging.

At the same time, Chappell said the meaning of lowriders often could be warped by stereotype.

"One of the things that people identify lowriders with right away is inner-city gang culture," said Chappell. "It's an urban form. It's something that's associated with urban communities and neighborhoods. These are communities that have had trouble with gangs and violence. So, to the extent that lowriders didn't come out of the suburbs, they are close to these things. There are gang members who appreciate custom car styles and lowriders. But the lowriders I got to know best really wanted to appear as positive forces in their communities."

Indeed, in researching his book Chappell spent time with an Austin car club that performed charity work. But the lowrider club's main reason for existence was to cruise late into the night on weekends.

"It's about taking your car out in a caravan and making sure that people see it out in public," he said. "A lot of time, it involves finding an empty parking lot late at night and just hanging out. It's a chance to talk about the cars, but also discuss what's going on in the community. When people were gathered in a parking lot, you'd hear about a funeral if someone had lost a family member. Or relationships, or work issues. It was really a public sphere where people were talking about what was going on in their lives."

But the clubs sill revolved around the customization of cars — and many lowrider enthusiasts agree on what makes the foremost lowrider vehicle.

"Early '60s Chevys, those are key," Chappell said. "Those are the quintessential lowriders — a '61 to '64 Chevy Impala would be perfect. And there are practical and mechanical reasons for that. The frame of the Impala is really good for hydraulics. It's a very solid car. There are lots of flat surfaces for murals. But it also represents the past to people whose families were entering the middle class in the '60s. That was a time there was more consciousness about Mexican-American identity and people trying to become more visible in American society."

"Lowrider Space: Aesthetics and Politics of Mexican American Custom Cars" is available from the University of Texas Press and from booksellers online.