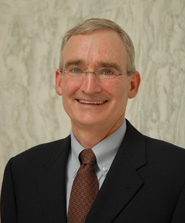 LAWRENCE — An environmental historian who studies the ways technological advancements in agriculture and industry have affected the evolution of human and nonhuman populations will become the Joyce and Elizabeth Hall Distinguished Professor of United States History at the University of Kansas in spring 2013.

Danny Anderson, dean of the College of Liberal Arts and Sciences, lauded the hire of Russell as a major step in further solidifying KU as a leader in American and environmental history.

Russell said he is honored to join KU. He is most looking forward to working with colleagues and students in history, as well as in other disciplines.

“The emphasis on interdisciplinary collaboration at KU is a big attraction for me,” Russell said.

“My career has been dedicated to trying to synthesize the humanities and natural sciences. I discovered environmental history in graduate school and realized this was the way to bring the two together. I have loved being in the field ever since.”

As the Hall Professor in United States History, Russell is filling a position long held by the founder of environmental history at KU, Don Worster, now professor emeritus. Russell’s addition on the faculty will build upon Worster’s legacy, said Paul Kelton, department chair and associate professor.

"We are very fortunate that we have recruited such a creative and brilliant scholar to fill the prestigious Hall Chair,” Kelton said. “With the addition of Dr. Russell, KU will continue its tradition as having one of the most highly regarded environmental history programs in the world."

Coming to KU is in part a homecoming for Russell, who grew up in Great Bend and Nebraska. He is pleased to return to the Plains, where his family has lived for five generations working on farms, ranches and for natural gas pipeline companies.

“These are all major industries in the Plains areas. I think growing up on the Plains made it very clear to me that environment has a big impact on human experience,” Russell said. “That’s one of the reasons that I’m interested in environmental history.”

His current research is interested in co-evolutionary history, which looks at how rapid social and technological changes have impacted both humans and other species. He is working on a book that looks at this phenomenon in the case of dogs in 19th century Britain at the time of the industrial revolution. As humans were going through rapid changes in social and industrial structure, Russell found there were notable changes in dogs as well, with new types appearing and others disappearing.

Russell received his bachelor’s degree in English from Stanford University in 1980 and a doctorate in biology from University of Michigan in 1993. He has been at University of Virginia since 1994.

Four research projects in which Russell has been involved have received National Science Foundation funding, including two in which he was principal investigator. He has also received several fellowships and awards in recognition of outstanding research and teaching.

The Department of History is part of KU’s College of Liberal Arts and Sciences, which encourages learning without boundaries in its more than 50 departments, programs and centers. Through innovative research and teaching, the College emphasizes interdisciplinary education, global awareness and experiential learning. It is the broadest, most diverse academic unit at the University of Kansas.