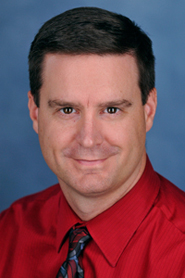 LAWRENCE — Thomas Prisinzano, professor of medicinal chemistry, has been named the new chair of the University of Kansas School of Pharmacy Department of Medicinal Chemistry, effective Dec. 18.

Prisinzano earned a bachelor's in chemistry from the University of Delaware and a doctorate in pharmaceutical sciences from Virginia Commonwealth University. He received postdoctoral training at the National Institute of Diabetes and Digestive and Kidney Diseases at the National Institutes of Health in Bethesda, Md. Current department chair Barbara Timmermann recruited Prisinzano in 2007 from the University of Iowa, where he was an associate professor.

An internationally recognized leader in the chemistry of drug abuse, Prisinzano has contributed widely to the understanding of the substance Salvia divinorum. His research also focuses on formulation of new drugs that draw on the benefits of opium alkaloids such as morphine and codeine without side effects such as tolerance, dependence and respiratory depression. The research aims to lead to potential new medications for the treatment of pain and drug dependence.

"Dr. Prisinzano has established himself, nationally and internationally, as a respected authority in the study of medicinal chemistry," School of Pharmacy Dean Ken Audus said. "He is a natural and creative leader, and I'm confident he'll work effectively with faculty to develop a vision and strategic plan for the department."

Prisinzano follows University Distinguished Professor Barbara Timmermann, who decided in October to resign as department chair after more than seven years in the position. Timmermann will remain on the faculty and continue her research work on natural products chemistry, drug discovery from plant and microbial biodiversity and safety and efficacy studies of botanical dietary supplements. She will also continue as the principal investigator and director of the NIH-funded Center of Biomedical Research Excellence Center for Cancer Experimental Therapeutics.

"We are grateful for the hard work and guidance that Dr. Timmermann provided throughout her tenure as department chair and will continue to provide in coming years as a valued member of our faculty," Audus said.

RT @KUEcoResearch : An all-time low for overwintering monarchs? But the real issue is declining populations over time. @monarchwatch https:…
«»
Follow us on Twitter »
Why KU
Apply »
One of 34 U.S. public institutions in the prestigious Association of American Universities
44 nationally ranked graduate programs.
—U.S. News & World Report
Top 50 nationwide for size of library collection.
—ALA
5th nationwide for service to veterans —"Best for Vets: Colleges," Military Times