LAWRENCE — For the second time in five years, a University of Kansas School of Law moot court team has qualified for the international finals of the European Law Students’ Association Moot Court Competition. 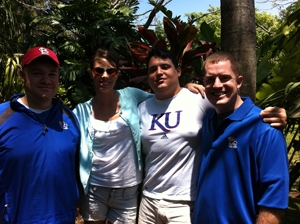 Third-year law students Bruno Simões, of Lawrence; Ryan Thornton, of Sapulpa, Okla.; Jade Martin, Rose Hill, and Matthew O’Neill, Tecumseh, advanced to the semifinals at the All America Regional Round in Escazú, Costa Rica, guaranteeing them a spot in the championship round next month. The other semifinalists were Queens University, American University and Harvard, the eventual champion of the regional round. KU Law’s squad will join 20 other top teams from around the world April 30-May 5 in Geneva for the final oral round. In 2009, a KU Law team advanced to the international finals in Taipei, Taiwan.

“The students and teams argue on the basis of conceptually and technically complex rules, so to be successful, they need to be quite sophisticated,” said Raj Bhala, Rice Distinguished Professor and the team’s coach. “The success of our team shows KU Law can and does have a global reach.”

The ELSA Moot Court Competition is a simulated hearing in the World Trade Organization dispute settlement system. Competitors represent both parties to the case by presenting oral submissions in front of a panel, which consists of World Trade Organization law experts. This year’s topic was currency devaluation and its effects on trade balances and patterns following a global economic crisis. The team prepared for the competition by enrolling in international law classes, researching extensively on the problem, and practicing in over 15 rounds with fellow students and professors.

“Hearing our team number called as qualifying for Geneva was exhilarating,” Martin said. “Our site hosted both the North American and South American regional qualifiers.  In addition, the judges included current and former WTO personnel, including a former Appellate Body member.”

This year’s competition was the first to advance four teams from each of the four regional rounds to the finals in Geneva. After making it to the semifinals, KU Law’s team lost a close match to American University, but they already have a plan for success in the finals.

“For Geneva, we plan on improving our oral presentation to the style European panelists will likely prefer,” said Simões, the team’s captain. “It is a quick turnaround, but we're excited to get the opportunity to further represent KU Law and its international trade program.”

This most recent success builds on an impressive string of accomplishments for KU Law’s moot court program over the past two years. Last month, another KU Law foursome advanced to the international finals of the Jessup International Law Moot Court Competition in Washington, D.C., and during the previous school year, multiple teams took home awards at both the national and international levels, including a first-place finish at the International Moot Court Competition in Information Technology & Privacy Law.