LAWRENCE — Hannah Sitz, a University of Kansas student from Andover planning a career in the nonprofit sector, has been named a 2013 Harry S. Truman Scholar. Sitz is the 17th KU student since 1981 to be named a Truman Scholar and the only 2013 recipient from the state of Kansas. 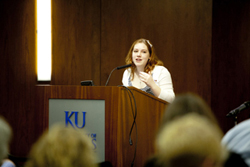 The national scholarships provide up to $30,000 for graduate school for college juniors preparing for leadership in public service. The Truman Scholarship Foundation was established by Congress as a living memorial to President Truman in 1975 and made its first scholarship awards in 1977.

The award was announced to Sitz in a surprise meeting with Chancellor Bernadette Gray-Little in conjunction with the University Honors Program spring reception on April 7.

“Hannah has been a great leader on campus as an undergraduate, particularly in her leadership of Alternative Breaks,” said Gray-Little. “It is a tremendous honor for her and a great honor for the university when one of our students is recognized in part thanks to the opportunities across campus she has taken advantage of.” 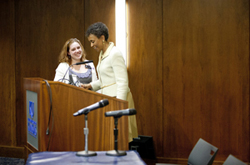 Sitz is a senior in her third year at KU pursuing a double major in psychology and in strategic communication in the William Allen White School of Journalism & Mass Communications. She is co-director of Alternative Breaks, a student-led organization that coordinates national service opportunities for students. Sitz worked to secure additional funding to ensure that more students could participate in the programs. Under her leadership, weeklong Alternative Breaks have been included as one way of completing a learning outcome in the new KU Core curriculum. She plans to pursue a Master of Public Administration degree after graduation.

In 2012 she was selected for the competitive CORO Summer Internship in Public Affairs in Kansas City. A 2010 graduate of Andover Central High School, Sitz is the daughter of David and Tracy Sitz. She also is a resident of Douthart Scholarship Hall.

Truman Scholars are chosen on the basis of leadership potential, intellectual ability and the likelihood of “making a difference.” Scholars are required to work in public service for three of the seven years following completion of a Foundation-funded graduate degree program as a condition of receiving Truman funds.

Sixty-two exceptional college juniors from 54 U.S. colleges and universities have been selected as 2013 Truman Scholars. They were selected from among 629 candidates nominated by 293 colleges and universities. The 2013 Truman Scholars will assemble May 28 for a leadership development program at William Jewell College in Liberty, Mo., and receive their awards in a special ceremony at the Truman Library in Independence, Mo., on June 2.

“We’re all thrilled to congratulate Hannah on this accomplishment,” said Kathleen McCluskey-Fawcett.  “Hannah’s dedication to public service is remarkable, and we’re all very proud of her.”