LAWRENCE — University of Kansas Design Professor Lance Rake’s interests — first in bicycles, then in bamboo — have taken him all over the world. But his quest was not just to create a better bike, but also to create jobs for the people in a small Alabama town. 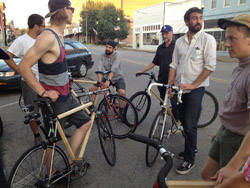 “I’m interested in products that provide opportunities for craft-base jobs that can be self-sustaining,” Rake said. “I want to help people make things consumers want that can be sold at a high enough margin that families could actually be supported with them.”

The first product to come out of his effort is the Semester Bike, a unique high-end bicycle of bamboo, carbon fiber and steel, which can be constructed by craftspeople in Greensboro, Ala.

The journey has been circuitous one. In the summer of 2011 Rake, who teaches industrial design, found himself experimenting with bamboo while working at HERObike, a nonprofit bike shop in Greensboro. The shop is one of a number of businesses opened by the Hale Empowerment and Revitalization Organization, or HERO. It is a community development organization dedicated to ending rural poverty in areas in and around Hale County, where Greensboro is located.

That bike shop was started with the help of John Bielenberg, a Maine-based graphic designer whose Project M helps nonprofits create new businesses. Bielenberg was a 2010 KU Hallmark Design Symposium speaker whose presentation and love for bikes initially interested Rake in HERObike. 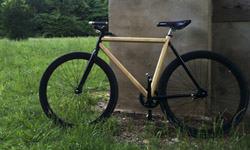 When Rake arrived at the shop, workers were already building bike frames from locally harvested bamboo, which is an abundant but untapped resource in the region. However, the material was being used just as it came from the forest. The finished products were sometimes humorously referred to as “‘Gilligan’s Island’ bikes” for their pleasing but somewhat unsophisticated appearance.

Rake was inspired by the idea of using bamboo, but as is the tendency of industrial designers he soon began looking for a better way. “I started thinking about how we could split and plane it to construct tubes that would be more like a traditional bamboo fly rod,” he said. “We would glue pieces together to form hexagonal tubes. These could be stronger, lighter and shock-resistant. From an engineering standpoint, the material could be made into lots of products besides bikes.”

Rake brought a truckload of bamboo back to Lawrence and spent the next year building projects and began experimenting with ways refining the bamboo and putting carbon fiber inside tubes he constructed from it.

In the fall of 2012 he took a sabbatical semester at the Indian Institute of Technology, Bombay. Here, he gained more skill working with the plant’s grasslike fibers. And, he studied the way IIT professors introduced high design to craft workers who traditionally produced commodity goods.

Upon his return, he finished two Semester Bike prototypes and debuted them at the North American Handmade Bicycle Show in Denver in February. “Everybody loved them,” he said.

With that success under his belt in late May, Rake and design department interim chair and associate professor Andrea Herstowski took six students to Greensboro for three weeks to work with the staff of HERObike. Four of them were industrial design students, one was an architecture student, and another came from engineering.

Rake required his students to build complete bikes in 72 hours in a series of rapid-prototyping sessions. This allowed them to quickly refine methods for manufacturing the bikes. Since Rake released photos to the industrial design media the products have captured the attention of a number of industrial design websites like designboom.com and core77.com.

For Pam Dorr, executive director of HERO, the Semester Bike represents hope for an economically depressed region. “For the last 30 years this area has had an out-migration of skilled workers. Those that are able to work leave for places where work is plentiful. New employment opportunities are scarce,” she said.

“HERObike's new model, ‘The Semester’ gives tangible proof that our community can use what it has to make new opportunities for ourselves, without waiting for a business from somewhere else to come. Initially, we expect to hire four new positions for HERObike, and as we begin to market the new bike, there will be additional jobs.”

Right now ongoing manufacture of the Semester Bike is in startup mode. A successful Kickstarter campaign raised money for tools, training and bicycle components. Rake has applied for several patents, and, if they are granted, will donate them to HERO.

“Bamboo just happened to me,” said Rake. “It isn’t an obsession. I see the future in design, and that’s what we teach in the design department. Small businesses making stuff on a small scale need a really nice, high level of design to create jobs that are sustainable.”

Researchers from @KUMedCenter and @KUJournalism set out to better understand how women leaving incarceration percei… https://t.co/75fx8Cy8wx
«»
Follow us on Twitter »
Why KU
Apply »
One of 34 U.S. public institutions in the prestigious Association of American Universities
44 nationally ranked graduate programs.
—U.S. News & World Report
Top 50 nationwide for size of library collection.
—ALA
5th nationwide for service to veterans —"Best for Vets: Colleges," Military Times