LAWRENCE — Much like key players in social networks, University of Kansas scientists have found evidence that there are keywords in word networks that hold together groups of words in our memory.

In a study published in the Journal of Memory and Language, Michael Vitevitch, professor of psychology, showed that research participants recognized these keywords more quickly and accurately than other words that were like the keywords in many respects except for their position in a network of 20,000 similar-sounding English words that he and colleagues created in 2008. Examples are shown below.

“If words are indeed stored like a network in memory,” Vitevitch said, “we should be able to see how characteristics of the network affect language-related processes. Our findings clearly show that there are words that hold key positions on the word network and that we process them more quickly and accurately than similar words that they hold together in our memory.”

The existence of keywords opens up many possible real-life applications, according to Vitevitch, such as providing new insights into developmental and acquired language disorders and suggesting treatments.

Keywords might also accelerate language learning, including a second language, if they were introduced early.

But there is a potential dark side to keywords—if they are “removed” from our memory, they could fracture part of our word network, he said.

Using the same mathematical techniques of network science that are used to develop networks that model social relationships or the spread of disease, Vitevitch analyzed his word network using a computer program called KeyPlayer that selected the keywords that, when removed, fractured parts of the network into smaller networks and isolated words.

“Fracturing the network in this way could actually disrupt language processing,” he said. “Even though we could remove keywords from research participants’ memories through psycholinguistic tasks, we dared not because of concern that there would be long-term or even widespread effects.”

Applying the techniques of network science to language opens up many new questions for scientists who study various aspects of language, Vitevich said. “Similarly, the domain of language provides network scientists with a novel opportunity to test various hypotheses that they may not be able to do in other real-world systems because we can manipulate things in the laboratory that we can’t ethically or practically manipulate in real life.”

Captions, from top to bottom: Figure 1A: A subset of a network of 20,000 English words that sound similar, created by KU Professor of Psychology Michael Vitevitch. The keyword that holds together the other words is “fish.”​ Figure 2A: When the keyword “fish” is removed from the network subset, it fractures into two smaller networks and two isolated words.​ Figure 3A: When the word “dish” is removed from the network, however, the network is not fractured. Unlike “fish,” dish is not a keyword. ​ 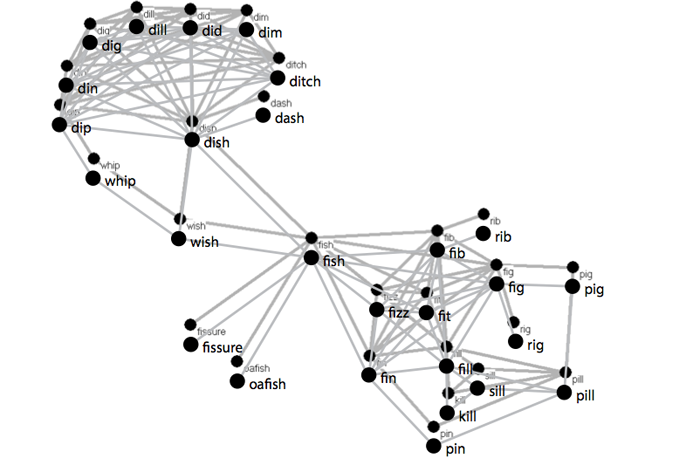 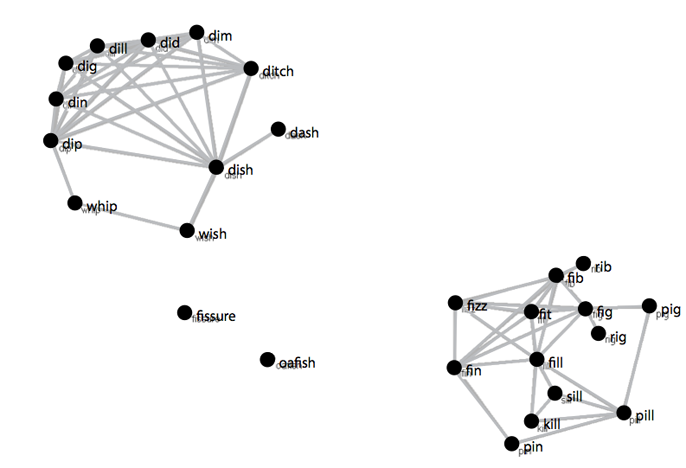 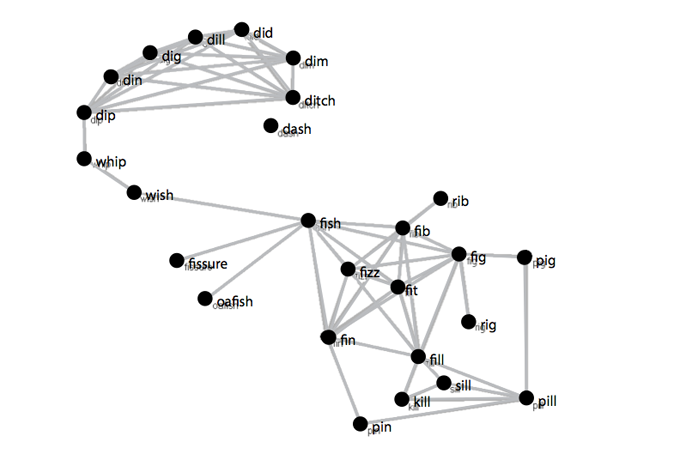