LAWRENCE — It’s not a monkey. It’s not a lemur. It’s not an African Bush Baby or even a Madagascan Mouse. Meet the Philippine tarsier: a tiny, adorable and downright “cool” primate from Southeast Asia. 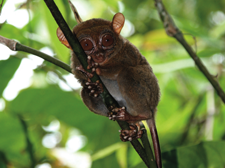 “It’s really not like any animals that Americans are familiar with,” said Rafe Brown, curator-in-charge at the University of Kansas’ Biodiversity Institute. “A tarsier has giant eyes and ears; an extremely cute, furry body; a long tail with a furry tuft at the end; and interesting expanded fingers and toe tips that look a bit like the disks on the digits of tree frogs.”

Brown said the tarsier (tar-SEER) has become the “flagship” iconic species for promoting environmental stewardship and ecotourism in the Philippines, a nation suffering from large-scale destruction of natural habitat.

“They’re threatened with habitat loss due to development, mining and deforestation from the timber industry,” Brown said. “On Bohol, where they are a big part of the tourist economy, literally thousands of animals are taken out of the wild, essentially harassed by tourists, and die in captivity due to the stress and inability of their captors to feed them an appropriate diet of live small animals. Tarsiers must eat an enormous amount every night to fuel their high metabolism.” 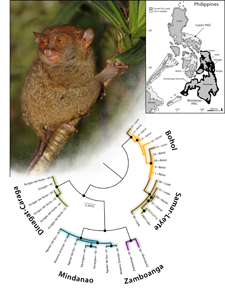 Because of threats to the tarsier, conservation efforts are mounting for the charismatic animal. But these have been thwarted by a lack of research: Too little has been known about the tarsier’s taxonomic diversity; there have been too few field studies; and a scarcity of genetic samples and voucher specimens in biodiversity repositories has left advocates of the tarsier in the dark. In short, to save the tarsier, experts have needed to know much more about the species.

“Basically, we can not legally protect something if we do not know that it exists,” Brown said.

Today, research by Brown and colleagues published by the journal PLOS ONE will shed new light on the animal’s genetic diversity and distribution. Additionally, the KU researchers have verified the presence of a new variety of tarsier, one heretofore only suspected to exist — the Dinagat-Caraga tarsier.

“Previously tarsiers were one species, divided into three named subspecies,” Brown said. “Our data disagree with that subspecies arrangement and instead demonstrate that the Philippine tarsiers are divided into three genetic units — but these units are from different localities than the named taxa. So our data provide an objective way to restructure conservation efforts and point the resources where they need to go, in order to really have an effective impact on preserving genetic diversity in the group.”

According to Brown, the results “tell us that we need a protected area — such as a national park — in the ranges of each of the genetic units if our goal is to maximally preserve the genetic underpinnings of that biodiversity. Currently, the newly discovered entity, the Dinagat-Caraga tarsier, has no protection. It is known from a small island that is being extremely heavily mined. Thus, it emerges as a new lineage — and a new major conservation urgency.”

They question of just how many Philippine tarsiers exist has been “left sort of hanging” for 25 years until now, according to the researcher. The newly discovered Dinagat Island and Caraga Region tarsier was first recognized as possibly distinct by the Filipino biologist Dioscoro Rabor in the 1970s, and now is confirmed by the KU genetic analysis.

“The confirmation of Rabor’s early suspicions about the Dinagat Island tarsier population was extremely exciting, and it was very satisfying to affirm his very perceptive early observations,” Brown said. “He commented that it looked larger to him and had different shaped fingers and toes. I’m just glad we were able to bring new, modern tools to this problem and identify the Dinagat-Caraga tarsier as a real conservation priority.”

Brown and Filipino colleagues have called for the establishment of separate tarsier sanctuaries and protection programs within the range of “at least” the three genetic entities established by the research at the Biodiversity Institute. Each, he said, merits unique strategies and programs, along with identification and remediation of conservation threats — for instance “mining in Dinagat versus unregulated tourist industry on Bohol,” he said.

To do less, Brown said, would harm the tarsier’s long-term prospects, potentially depriving the Philippines and the rest of the world of one of nature’s most charming and curious mammals.

“They move very rapidly and jump from tree trunk to tree trunk with ‘ricochet locomotion,'” Brown said. “They bounce from small sapling trunk to trunk, then leap down to pounce on their prey. They’re completely carnivorous. This is relatively unique among primates. The tarsier is famous for not eating any vegetable material of any kind. They eat insects, small snakes, lizards, small mammals and birds. They communicate with ultrasonic calls outside the range of human hearing. The tarsier is so cool!”

The National Geographic Society's Committee for Research and Exploration and the National Science Foundation supported the research.