LAWRENCE — The Emily Taylor Center for Women & Gender Equity has announced 27 honorees for the 2014-15 Women of Distinction calendar. The women were selected for their outstanding contributions to the university and community. 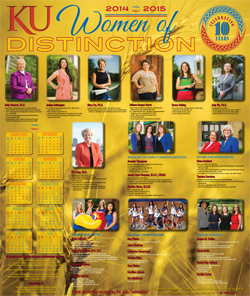 The reception for this year’s Women of Distinction will take place from 4 p.m.-5:30 p.m. Thursday, Sept. 4, in the Big 12 Room in the Kansas Union. Chancellor Bernadette Gray-Little will say a few words at the reception, and former calendar members will provide introductions for the newest women of distinction.

The calendar will be available at the reception and also at the Student Involvement & Leadership Center in the Kansas Union.

Those featured in the 2014-15 Women of Distinction calendar are listed below.

Sally Roberts is the associate dean for undergraduate programs and teacher education for the School of Education and an associate professor in the Department of Special Education. She received the Alice H. Hayden Award for Outstanding Research, Teaching, and Community Service in 1989 as well as the University Continuing Education Association Great Plains Excellence in Teaching Award in 2005. She is a 2003 Outstanding Mentor Award & Graduate and Professional Association Graduate Student Mentorship Award recipient.

Judy Wu is a University Distinguished Professor of Physics. From 2000-03, Wu was a Meredith Docking Scholar. She also received the Kemper Fellowship Award from KU in 2006. In 2012, Wu received the Higuchi Olin Petefish Award for Basic Science.

Jacklyn Baillergeon, of Leavenworth, graduated in spring 2014 with a bachelor's degree in journalism (strategic communication) and bachelor's degree in political science, as well as a minor in business. Baillergeon was one of twenty 2011 University Scholars. In 2014, she was an American Advertising Federation Most Promising Minority Student. From spring 2013 to spring 2014, she served as the Center for Community Outreach Helping Unite Generations coordinator.

Emma Halling, of Elkhart, Indiana, is a senior in American studies and women, gender & sexuality studies. She served as student body vice president during the 2013-14 school year. She is the founder and co-chair of Title IX Roundtable, an organization designed to educate students on Title IX’s role on campus. Halling is also a 2014 Truman Scholarship finalist.

Mary Fry is an associate professor in the Department of Health, Sport and Exercise Science and director of the KU Sport and Exercise Psychology Lab. She is a recipient of the 2010 Keeler Professorship and was named a Fellow in the Association for Applied Sport Psychology in 2009. She co-directed Strong Girls, a positive life skills and physical activity program for elementary-aged girls.

Addison Keegan-Harris, of Topeka, recently graduated from KU with a bachelor's degree in general studies in applied behavioral science, specializing in organizational behavior management and a minor in leadership studies. She currently serves as the academic program coordinator for the Kansas Women’s Leadership Institute. She was a 2013 ExCEL Award Finalist and a 2014 Donald K. Alderson Memorial Award recipient. Keegan-Harris also received her service learning, research and global awareness certifications from KU.

Volleyball Senior SuperStars: These volleyball players were selected based on their rigorous efforts and outstanding achievements both on the court and in the classroom.

Kara Wehrs, of Hampshire, Illinois, graduated in 2014 with a bachelor's degree in human biology. In 2011 and 2013 Wehrs was Academic All-Big 12 First Team and was named to the Jayhawk Classic All-Tournament Team in 2010.

Amy Wehrs, of Hampshire, Illinois, graduated in 2014 with a bachelor's degree in health, sport and exercise science and a minor in business. In 2012 and 2013, Wehrs was Academic All-Big 12 First Team. During her senior year, she saw game time in 14 matches.

Jaime Mathieu, of St. Louis, graduated in 2014 with a bachelor's degree in in health, sport and exercise science. She was Academic All-Big 12 First Team three years, from 2011 to 2013. During her senior year, Mathieu started 28 matches and saw action in all 33 matches of the season.  She finished third on the team with 292 digs.

Brianne Riley, of Naperville, Illinois, graduated in 2014 with a B.S.E. in community health. She is now a graduate student in nursing at Rush University. During her senior year, Riley became KU’s All-Time Digs Leader (2,053) and was named to both the Academic All-Big 12 First Team and Inntowner Invitational All-Tournament Team. She was also a Big 12 Defensive Player of the Week.

Catherine Carmichael, of Manhattan, graduated in 2014 with a bachelor of general studies degree in African & African-American studies and a minor in communication studies. Carmichael started in 16 matches and saw action in 27 during her senior year. She ranked fifth on the team for total number of kills and finished the season with 38 digs and 36 blocks.

Erin McNorton, of Dallas, graduated in 2014 with a bachelor's degree in business. Her senior year, McNorton started in all 33 matches and was the Big 12 Conference Setter of the Year, leading the nation with 1,517 assists. She was VCA Honorable Mention All-America, AVCA All-Midwest Region First Team, All-Big 12 First Team, Academic All-Big 12 First Team, 2013 Kansas Invitational MVP and a Big 12 Offensive Player of the Week.

Katie Schmidt, Atchison, is a senior in chemical engineering with a pre-medical concentration. She is president of the Society of Women Engineers and the head recruitment counselor for the Panhellenic Association. Schmidt also serves as a School of Engineering Student Ambassador.

Shawnee Wallace, Augusta, is a junior majoring in microbiology and minoring in psychology. She is a co-director of the Jayhawk Health Initiative and a 2014 Global Brigades Presidential Scholarship winner. In 2013 and 2014, Wallace was an Honors Opportunity Award winner.

Isabella Herrera, Overland Park, is a medical student at KU Medical Center. She recently graduated from KU with bachelor's degrees in neurobiology and French. She served as co-director of KU Alternative Breaks during the 2013-14 school year. Herrera was vice president of Douthart Scholarship Hall from 2012 to 2014 and is a Hall Center Scholar.

Marty McLaughlin is the executive director of the KUMC Office of Academic Affairs and Graduate Studies and is the first woman to serve in this role. McLaughlin developed the KU School of Medicine Junior Faculty Mentoring Awards in 2006 and established department-based junior faculty mentoring programs.

Jamie Lloyd Simpson is the director of accessibility and ADA education at KU. In 2013, she worked with the campus to achieve an accessible front entrance to Strong Hall. Simpson works to promote a campus culture of inclusion and engagement for people with disabilities by removing barriers and promoting universal design.

Cynthia Marta, of Rantoul, graduated from KU with a master's degree in social welfare in 2014. She served as president of AbleHawks and Allies during the 2013-14 school year. From 2012 to 2014, Marta was an Accessibility Ambassador. She is the 2012-13 recipient of the William Palm School of Social Welfare Scholarship.

Amanda Thompson of Lincoln, is currently a graduate student in speech-language-pathology at Fort Hays State University. She graduated from KU in spring 2014 with a bachelor's degree in speech-language-hearing. Thompson served as vice president of AbleHawks & Allies from 2013 to 2014. She was an Accessibility Ambassador from 2012-14 and a 2014 Michael Lechner Advocacy Award winner.

Diane Goddard is the vice provost for administration and finance. She led the KU Changing for Excellence initiative and has had a leadership role throughout the implementation of KU’s Bold Aspiration goals. Goddard was invited to be a part of a select national group to participate in the Oracle Global Higher Education and Research Industry Strategy meetings. She has succeeded in an area typically dominated by men, serving as a role model and mentor for other women.

Theresa Gordzica is the chief business & financial planning officer for the Business & Financial Planning Office. She has offered 30 years of service to KU, rising up the ranks in an area in which women are underrepresented. Gordzica served on the Saint Lawrence Catholic Campus Center Board from 1999 to 2014. In 1996, she received the Hugh O'Brian Youth Foundation Outstanding Leadership Seminar Award.

Rachel Mae Bullock, Overland Park, is a senior in human biology and applied behavioral science. She is president of the Delta Delta Delta sorority and a GaDuGi SafeCenter Victim Advocate. She is also a member of the KU Honors Program.

Micah Melia, Prairie Village, is a senior majoring in anthropology with minors in psychology and sociology. She was a 2014 Truman Scholarship finalist and currently serves as the executive director for the KU Center for Community Outreach. During the summer of 2013, Melia was a research intern at the University of Virginia Curry School of Education.

Natalie Parker, Overland Park, is a senior studying journalism. She currently serves as an intern for the Paul Davis for Governor campaign. Parker is the public relations coordinator for KU Alternative Breaks and student senator for the All Scholarship Hall Council.

Joanne Collins, KU alumnus, is a former member of the Kansas City, Missouri, Council who has served on numerous national, regional, state and local boards. In 1976, she received the A.M.E. Zion Harriet Tubman Award. In 2010, Collins received the Living Legend Award, given by the Heartland Women’s Leadership Council, and in 2013 she was the James Denneny Spirit Award recipient, an award given by the KCMO Economic Development Corporation.