LAWRENCE — Public, single-gender schools have become more common over the last decade, but new research shows that people might choose such schools based on de-bunked ideas of differences in male and female brains. 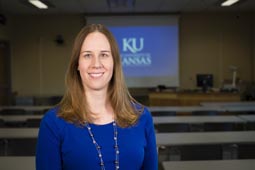 Meagan Patterson, associate professor of psychology and research in education, co-authored a study with Erin Pahlke of Whitman College and Rebecca Bigler of the University of Texas in which they surveyed parents, teachers and students at both an all-girls school in the southwestern United States as well as parents, teachers and students from co-ed schools in the same district. They asked respondents about reasons that their district had opened an all-girls school and their personal endorsement of these reasons.

The study is published in the journal Sex Roles.

They found that teachers largely embrace the idea that differences in boys’ and girls’ brains affect the way they learn. Neuroscience research fails to support that claim. But despite neuroscientists showing that such differences are small and the similarities between the two genders’ brains and learning styles are much greater, the idea has found its way into teaching materials, the media and acceptance in society.

“It does color our cultural conversations, and I think our data shows pretty clearly that it colors the views of parents, teachers and students as well,” Patterson said.

The researchers asked survey respondents how strongly they agree with four common justifications for single-gender schools. Along with brain and learning differences, they asked about gender discrimination, difference in interests between genders and in-group preferences, or whether girls prefer to be in school with other girls. Those associated with the all-girls school more strongly agreed with all four reasons than those associated with co-ed schools.

“These are people who have chosen to affiliate with those schools," Patterson said. "They believe in all-girls schools, so it makes sense they agree with the reasons stated for their necessity more than people affiliated with co-ed schools.”

What is most troubling to the researchers is that those affiliated with single-gender schools, teachers especially, are basing their decisions on information shown to be untrue. When teachers believe that boys and girls need to be taught differently, they can end up reinforcing gender stereotypes instead of fighting them. For example, girls could be steered away from science, technology, math and engineering fields, while boys receive less focus on the arts, Patterson said.

Policymakers have also cited the idea of gender differences as justification for establishing single-gender schools. The schools have become more popular since the implementation of No Child Left Behind. The law allows school districts to make changes in student opportunities for the purpose of “educational innovation,” and many districts around the country began establishing public single-gender schools and classes in the name of innovation or new opportunities for students.

Dozens of single-gender schools around the country are currently facing legal challenges, claiming they are unequal and largely established on false premises. The American Civil Liberties Union, which is leading the challenges, cites the debunked claims of brain differences as the reason such schools are unequal.

Pahlke, Bigler and Patterson argue that their evidence backs the claims against single-gender schools.

“We’re finding evidence that teachers and policymakers endorse this idea that girls’ and boys’ brains are different and that they learn differently,” Patterson said. “And that can lead to gender stereotyping rather than expanded educational opportunities.”