LAWRENCE — Insects transmit many of the world’s most infectious diseases, but there has been a decline in the expertise needed to recognize species of insects most likely to transmit illness to people.

In a new effort to safeguard human populations, a University of Kansas-based team of scientists, computer programmers, public health officials and artists is working to enable mobile phones to link up to computers that automatically identify species of disease-carrying insects.

Peterson is leading the Virtual Vector Project, which already has built an ingenious prototype to recognize species of triatomine bugs — or "kissing bugs" — that spread Chagas disease, endemic in much of rural Mexico, Central America and South America.

Because only some triatomine species spread the infection, it’s vital for public health workers to know which species they encounter. Peterson said identification of insect species would change infestation countermeasures, because each species behaves differently.

“Usually, public health teams are going to go into villages to fumigate houses,” he said. “But this tool lets you know what you need to fumigate. It depends on the species whether you fumigate the houses or the stables, and how frequently.” 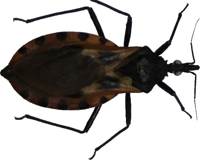 The project has the potential to help public health workers to suppress insect-borne outbreaks of Chagas, which has infected roughly 8 million people, including 300,000 in the U.S., according to the Centers for Disease Control and Prevention.

Project member Ed Komp, research engineer with KU’s Information and Telecommunication Technology Center, said past attempts at automated identification of insects have proven too vexing due to technical challenges.

“People have tried to do this for a long time and generally without success,” Komp said.

He has programmed a computer application to scan photos of triatomines for “landmarks” and automatically identify them to species using detailed shape comparisons.

To succeed, however, the application needs precise photography — single, adult insects shown with the same placement, background, angle and lighting.

To tackle the problem, the Virtual Vector Project’s researchers teamed with Kansas City-based artist Jarrett Mellenbruch on the recommendation of KU’s Spencer Museum of Art.

Mellenbruch designed a small stand into which users place an insect to take consistent photos — a kind of portable photo studio for bugs. The photo stand incudes a slot that holds an iPod so that photos will be uniform, allowing the project’s computer application to identify insects caught in the field.

“Jarrett came in and saw that our pictures needed to be improved,” Peterson said. “He designed a photo stand that you could stick in your day sack and assemble in 15 seconds. It’s a box with consistent background colors, insect size and a nub to stick the insect on. The upper level has a post for powerful LED lights and a cradle where you just drop in an iPod. The phone can only go in the right position. The cool thing about it is that our colleges in the field can synch the iPod to Dropbox and connect to wifi in the lab, uploading photos in real time.”

For now, the bug photo box is made from Corian, the countertop material. But the Virtual Vector Project’s researchers intend to make the plans for the box available online so that anyone with a 3-D printer could generate one. While the system today works only with the highest-quality iPod photos, the researchers hope to make it compatible with any digital photo. Eventually, the system could be used to automatically identify a broad range of insects — such as ticks and mosquitoes — that act as disease vectors.

The project includes collaborators from the University of Brasília, FIOCRUZ (a Brazilian public health institution) and the National Institute of Public Health of Mexico. At KU, the Biodiversity Institute, ITTC and the Spencer Art Museum are collaborating on the project. Perry Alexander, ITTC director and distinguished professor of electrical engineering and computer science at KU, also is helping to lead the effort.

“We have really good colleagues,” Peterson said. “They’re good, smart people who are willing to take risks and venture time and effort on a potentially (but not guaranteed) very fun project.”

KU’s Office of the Provost funded the Virtual Vector Project with more than $300,000 via the Research Investment & Strategic Initiative Grant Program.