LAWRENCE — Rafe Brown, curator-in-charge of the herpetology division at the University of Kansas’ Biodiversity Institute, has devoted years to cataloging and conserving the biodiversity of the Philippines, a nation he views as an ecological treasure house. 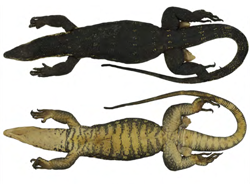 It’s no wonder that Brown finds Manila’s wide-ranging black market in exotic animals to be “bizarre and grotesque.” He said Manila’s criminal trade in animals ranges from pet stores “with many endangered and illegal species hidden behind the scenes” to major international wildlife violators and wholesale smuggling rackets.

“The operations involve everything from sea turtles, to ivory, to tiger parts and rhino horns,” Brown said. “These involve private individuals, pet store owners, politicians, zookeepers and corrupt government officials. Many animals are sold as pets and ‘captive breeding’ stock and zoo specimens. Many are sold as food, many are slaughtered and sold as parts for ‘medicinal’ purposes and aphrodisiacs, and many are huge, high-stakes status symbols for the wealthy elite — such as tigers, monkeys and Komodo dragons.”

Recently, amid this commerce, Brown and colleagues discovered two species of water monitor lizard that were previously unknown to science. They have just published descriptions of the new species in the journal Zootaxa, along with an analysis of Manila’s illegal pet and bush-meat trade in the journal Biological Conservation. Moreover, a film documentary about their remarkable discovery is in the works.

“Over a five-year period we visited pet markets, roadside bush-meat stands and various other markets where monitor lizards were sold as pets or meat,” said the KU researcher.  “We used to walk around pet markets and side streets talking to traders using circuitous conversation and eventually getting around to asking them if they had ‘anything else’ behind the scenes or in the back room.”

Oftentimes, sellers would offer Brown and his fellow researchers “a turtle or monitor lizard or some other animal which they should not have had in their possession," he said. The team purchased these reptiles to genetically analyze them at KU in an effort to help Philippine police and conservationists. 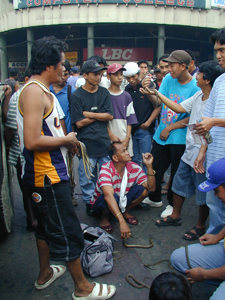 “Our plan was to build genetic databases to use as enforcement references for confiscated animals, to empower local enforcement officials with the forensic, scientific and legal means of establishing a confiscated animal’s provenance,” Brown said. “We were aware that traders routinely mislead buyers with fantastic stories of animals’ origins to fetch a higher price, so we reasoned that genetic methods could pinpoint an animal’s origins when a trader’s account was not to be trusted.”

In the process, to their surprise, the researchers found genetic varieties of water monitor lizards that varied sharply from those common to the areas surrounding Manila. This was their first clue that additional species diversity might exist, hidden within the northern Philippine water monitor lizard population.

“Both are gorgeous, black-and-white or black- and yellow-colored animals,” Brown said. “They are dark in general appearance with bright speckling of white or yellow spots arranged in rows and stripes around the body, as if wearing shining necklaces. One gets up to a little over three feet in length, and the other is somewhat larger at about four feet. They’re monitor lizards, so they’re alert, with large eyes, continually flicking long tongues, which they ‘smell’ with, and they’re generally very alert and look quite intelligent.”

Back at KU, Brown and his colleagues Luke Welton, now with Brigham Young University; Cameron Siler, now with the University of Oklahoma, and Mae Diesmos, with the University of Santo Tomas, Manila, sequenced the mitochondrial and nuclear DNA of the monitor lizard samples. They found the two lizards were “morphologically cryptic,” meaning they looked much like known species of monitor lizard, but their genetic variation indicated they were evolutionarily distinctive, qualifying them as unique species. The researchers named the lizards Varanus dalubhasa and Varanus bangonorum. 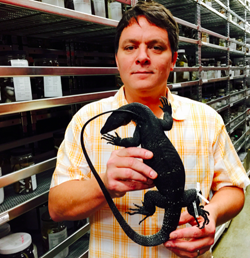 According to Brown, conservationists had overlooked the lizards because they were considered to be the same as another, widespread species. Now, the two new species are becoming a priority for conservation efforts.

“They were confused with species that were physically very similar in scale numbers, shapes, color patterns and body size,” he said. “But even though they looked similar, it now makes perfect sense to us in hindsight that they should be distinct and considered separate species because they come from different areas  — a separate island in one case and an isolated peninsula in another. Both have been isolated for considerable geological time.”

From other animals procured from Manila’s black market, the KU-based research team found that half of the time traders had misled them, reporting “exotic” locales for their animal wares in hope of getting higher prices.

“We used standard DNA sequencing technology, determined the genetic types of the samples from traders, compared them to our wild-caught, known-locality samples and then ‘ground-truthed’ what the traders told us versus what the genetics inferred,” Brown said.

According to Brown, much of the illicit trade has moved online recently, where traders utilize social networks to hawk animals.

“Whereas two years ago, deals were frequently made in the back alleys of streets of Manila, most are now made online, using the most rapidly growing scourge of wildlife protection — Facebook,” he said.  “Today, Facebook is the primary means with which unscrupulous individuals deal in wares of illegally harvested wild animals.”

The National Science Foundation funded this work. The Philippine Biodiversity Management Bureau and the KU Biodiversity Institute supported Brown and his students throughout the lengthy period that it took to complete the undercover research. Other team members included Arvin Diesmos, Emerson Sy and Vicente “Enteng” Yngente.