LAWRENCE — The recent high profile hacking scandal surrounding Sony and “The Interview” highlighted just how tense relations can turn between the United States and North Korea. A University of Kansas professor has taken part in an exchange between North Korean and American scientists that shows science and empathy toward another’s worldview can be the first step in thawing icy diplomatic relations. 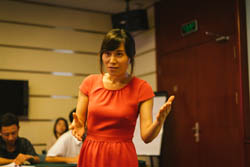 Since the end of World War II, North Korea has been at odds with the governments of the United States and South Korea. Wars, skirmishes, nuclear threats, economic sanctions and even hacking scandals have been part of the ongoing disagreements. Hyunjin Seo, assistant professor of journalism at and faculty affiliate at KU's Information and Telecommunication Technology Center, has taken part in an ongoing exchange between U.S. and North Korean academic scientists that she says can bring people together peacefully in areas they can agree on.

“What we are aiming for is to find areas of collaboration and engagement between the two sides. Historically there are examples of scientific engagement helping diplomatic relations,” Seo said. “Science is not political. It is easier for us to take part in conversations about sciences without resorting to politics.”

Seo, Fred Carriere and Stuart Thorson of Syracuse University last summer took part in a three-week workshop led by the U.S.-DPRK Scientific Engagement Consortium. Now in its seventh year, the consortium is the only ongoing, sustained academic science engagement between the U.S. and North Korea. The event involved 20 North Korean academic scientists, English teachers and Foreign Ministry officials in Dalian, China. The goal of the workshop was specialized English training to help facilitate participation by North Korean academic scientists in international science meetings. Seo led a session on digital media and helped instruct North Korean participants on how to use digital technologies for academic research and international research collaborations.

Seo and Thorson will present their research at the Center for Public Diplomacy conference this month in Los Angeles. One of the biggest takeaways, the authors state, is the need for empathy for another nation’s position. Being able to understand how someone views the world, even if you don’t agree with their position, is key to negotiation, understanding and improved diplomacy.

“What we have discovered through these workshops is there is a significant need for them to understand us and for us to understand them,” Seo said. “We need to be able to put ourselves in each other’s shoes and better understand why we all might make the decisions we do.”

For the majority of people in both the United States and North Korea, all they know about the other country is what is presented in the media. Those reports are often highly stereotypical and incomplete, Seo said. While that may be the case, she said annual Pew Research Center global surveys shows that many nations have great respect for American science and technology, even if they don’t agree with the politics, disapprove of American values and have a low opinion of the culture. That can provide the common ground for diplomatic exchange.

Seo is no stranger to American, North Korean and South Korean relations. A former diplomatic correspondent, she covered U.S.-North Korean relations for media outlets such as the Korea Herald and Asia Times, and she has visited North Korea a dozen times. Those experiences helped her understand attitudes from both sides and to dispel stereotypes such as that the Internet is virtually nonexistent in North Korea. While it is not as widespread as many countries, a certain group of North Korean academic scientists are very well-versed in the workings of the Internet, and as a result of the consortium, the World Health Organization has agreed to provide access to a number of academic journals for the nation’s developing digital libraries.

The consortium hopes to continue holding the exchanges, examining different areas of academic sciences as they progress. While the exchanges likely won’t end all tensions between the two sides, they have already shown they can bring representatives together, even when nuclear tensions between the two have been high. The exchanges have also led to more broad shared understandings and can be a useful tool in overcoming demonization.