LAWRENCE — Grand juries in 2014 in Missouri and New York declined to return indictments on white police officers in the deaths of two black men, Michael Brown and Eric Garner. Racial tensions rose, and organized protests developed throughout the country.

A new book by a University of Kansas professor points to a similar set of events in the nation's history concerning a seemingly forgotten investigation of the Ku Klux Klan's violence during the early days of Reconstruction.

Shawn Alexander, associate professor of African and African-American Studies, edited selected testimony from the 1871 congressional hearings for “Reconstruction Violence and the Ku Klux Klan Hearings.” The hearings detailed severe violence in the South against African-Americans and sympathizers by Klan members in the aftermath of the Civil War and after passage of the 13th, 14th and 15th amendments.

Congressional testimony estimated that anywhere from 20,000 to as many as 50,000 people, mostly black, died in violence between 1866 and 1872, he said. As a result of the congressional investigation, federal grand juries issued about 3,000 indictments in connection with the killings. Hundreds of defendants pleaded guilty in return for suspended sentences, and the Justice Department dropped charges against nearly 2,000 others in order to keep the court system from being clogged. 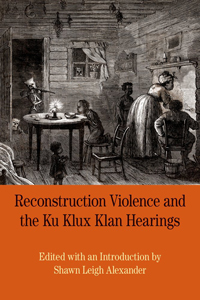 Of those who did face trials, about 600 were convicted and 250 were acquitted. Only 65 individuals were imprisoned, said Alexander, who also directs the Langston Hughes Center at KU.

"The fact that only 3,000 people were thought to be guilty enough to have a trial shows me that our nation in 1872 wasn't willing to really contemplate what it means for a white individual to be brought to justice for the killing of an African-American," Alexander said. "And when it comes to violence and prosecution for that violence I don't think we've changed that much in almost 150 years."

The book, recently released by Bedford/St. Martin's, is an effort to compile relevant pieces of the 13 volumes and more than 8,000 total pages of testimony. Alexander has also researched civil rights leader and journalist T. Thomas Fortune. Alexander was exposed to these volumes and the history they hold by Fortune talking about how the 13 bulky volumes, in which his father was one of the testifying witnesses, “haunted him from his bookshelf.”

"What I hope is that someone will read this book and understand that from the African-American community's understanding, violence has always been here," Alexander said. "When people say you're overreacting to this one act of violence, the community actually understands that it's a history of violence."

The hearings and details about the Reconstruction violence were lost in history due to events that followed the hearings, such as the outlawing of the Klan, and an unwillingness to acknowledge an ugly part of U.S. history, he said. Most of the history of race relations in America focuses on the defeat of slavery with some discussion of legal discrimination, segregation and disfranchisement, but it ends with an emphasis on the victories of the Civil Rights Movement and Martin Luther King Jr. The violence, Klan-organized, and later vigilante lynching and mob action are left out of the story much of the time.

"That's one of the problems that we have, and that's one of the things the nation is grappling with in recent events," Alexander said. "Violence has always been here in America, especially in race relations, but American doesn't want to talk about the violence. We skirt away because it doesn't fit our national narrative."

Instead, he said, details of the Klan hearings show how organizations targeted black people in the South, particularly ones who became successful or showed progress. In an effort to stop them from being able to freely act as U.S. citizens by functioning in the economy and exercise basic rights such as voting, the Klan used violence to intimidate and kill them. He argues the violence on the ground led to the failure of Reconstruction, not the political fights and mistakes made in Washington.

"The violence is a reaction to emancipation and black progress and success," Alexander said. "Most people believed, especially in the South, that African-Americans would not survive without slavery, without the protection of the white plantation owners, the white power structure. The exact opposite happens. And when blacks thrive, in reaction to that, you have this violent terror rearing its head."

He said despite the depressing details in the testimony, it's also a story of African-American perseverance, determination and organization during a dark period of American history.

"True understanding of the pain, suffering and violence that has occurred in this country will allow the nation to begin an open discussion of race beyond looking at it as a celebratory victory," Alexander said, "Until we fully recognize that pain and suffering, we can't truly understand the centrality of what race means and has meant to American history."