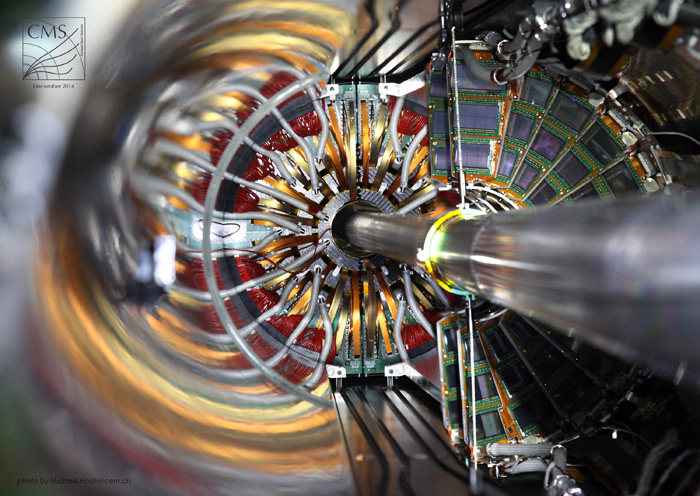 LAWRENCE — By any measure, the Large Hadron Collider is the most advanced scientific instrument ever built by humans. In 2012, scientists using the gargantuan particle accelerator shook the world with observations of a subatomic particle closely resembling the Higgs boson, confirming a linchpin of the Standard Model of physics.

Many scientists from the University of Kansas were among the LHC researchers who achieved this historic breakthrough.

But they accomplished their initial Higgs observations with an atom smasher that was running below its full-potential energy of 14 tera electron Volts (due to magnets that were unable to run enough current in some of the welds along the collider’s 17-mile circumference). So, since February 2013, particle collisions at the LHC have been put on hold as the instrument underwent a tune up.

On March 12, the overhauled particle accelerator resumed operations at the higher level of energy.

“The running through 2012 was carefully planned to get a dataset that would allow us to discover the Higgs if it was there,” said Alice Bean, professor of physics and astronomy, who has performed extensive research at the collider. “A complex machine like the LHC also needs to have maintenance done on it — so even without the upgrade in energy, it would need some downtime.”

According to the KU physicist, in addition to experiments tied to confirming the Higgs boson, new frontiers of science could be established by the souped-up supercollider.

“With the new, higher center of mass energy — almost 14 TeV compared to 8 TeV — a whole new energy region will be waiting for us to discover something,” Bean said. “Theorists have been waiting for us to find supersymmetric particles, but so far there is no evidence for them. If we continue to not find these, this will also be very interesting.”

Bean said the collider’s Compact Muon Solenoid detector — with a pixel detector developed and built by KU researchers — would require maintenance and upgrades to operate at the boosted energy levels.

“The pixel detector which we are involved with at KU won’t be able to function for too long once the LHC turns on again," she said. “It was never designed to be able to record all the images that will be forthcoming at the higher energy and higher data rates as well.”

So while the LHC was undergoing upgrades, Bean and her colleagues were optimizing a new detector for the LHC’s greater level of operational energy.

“We’ve designed a new pixel detector and are building it at KU and elsewhere to replace the current pixel detector in 2017,” she said. “This has been a major focus of our research.  The shutdown of the LHC allowed CMS to install some components of this in preparation for the 2017 shutdown when we plan to install the entire upgraded pixel detector. They take several years to build.”

For the time being, KU researchers installed a pilot pixel detector to test its readout system and understand how best to use the device.

“Remember that we are trying to take 40 million pictures per second,” Bean said. “We have to figure out how to throw away most of the data without throwing away interesting stuff that was recorded.”

In addition to repairing and developing components, the KU physicists have been analyzing data from the previous run and preparing to take data at an entirely new energy.

“We have to simulate events in our detector and figure out how to look for the signals of the physics at the higher energy,” Bean said. “There has been non-stop massive computer processing of simulations to get ready for this so that when the accelerator turns on, we’re ready to go.”

Now that the KU group — including faculty, postdocs, graduate and undergraduate students — has contributed to the Higgs boson discovery, it hopes to build upon its international reputation.

“Our KU group has received substantial funding to work on CMS, which has come to Kansas,” Bean said. “We have many important, well-cited, peer-reviewed papers in addition to the Higgs discovery. With the heavy-ion collisions, CMS has been able to record collisions with conditions at the highest manmade temperature ever going back to the Big Bang. It’s been easy for us to recruit undergraduates into research opportunities and train them in the latest technology so that they go off to productive graduate school or industry careers. We’ve trained future engineers and entrepreneurs. The computing and electronics technologies that we use have helped to propel student learning and KU’s research infrastructure.”

The LHC is located under the Franco-Swiss border near Geneva and operated by CERN, the European Organization for Nuclear Research. KU was the lead institution on an National Science Foundation Major Research Instrumentation grant as well as an NSF Partnerships in International Research and Education grant.

Photo: The pixel detector developed at KU resides at the heart of the Large Hadron Collider’s “Compact Muon Solenoid.” Image courtesy of CERN, the European Organization for Nuclear Research.