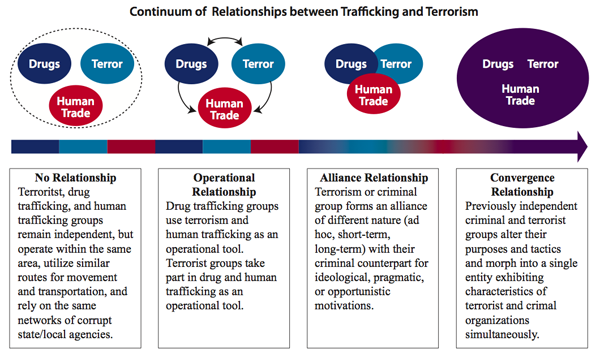 LAWRENCE – As organized crime plays an increasing role in funding terrorism, research at the University of Kansas aims to pinpoint hotspots in Eurasia where drug trafficking, human trafficking and terrorism coincide.

Selected to receive a $953,500 Minerva grant from the U.S. Department of Defense’s Minerva Research Initiative, Mariya Omelicheva, the study’s principal investigator, along with KU geography professor Stephen Egbert and Rowan University political science associate professor Lawrence Markowitz, will examine the connections between terrorism and organized crime in Central Asia, South Caucasus and Russia. The three-year project also will look at the conditions under which terrorist-trafficking alliances are forged and changed and the ability for governments and international organizations to monitor, prevent and dismantle the terrorist and criminal activity.

“Distinguishing this study is its systematic approach, which does not rely on anecdotal or piecemeal evidence,” said Omelicheva, who is director of the KU Center for Russian, East European and Eurasian Studies and associate professor of political science.

Using GIS tools, the project will map and model the nexus between trafficking and terrorism in nine Eurasian countries. Researchers will pull the geographical coordinates of major terrorist incidents from the Global Terrorism Database, geo-reference drug seizures reported by the United Nations’ Office on Drugs and Crime, and human trafficking data assembled from the International Organization for Migration survey. KU students will help with the mapping and analyzing of data.

“Trafficking and terrorism adversely impact governance, security, stability and development in this region and beyond,” Omelicheva said. “They create conditions precipitous for the rise of crime, violence and extremism in states that are U.S. partners and allies.”

More than a quarter of all the drugs produced in opium-rich Afghanistan pass through Eurasia. Drug trafficking in the region has been linked to the strength of such terrorists groups as the Islamic Movement of Uzbekistan, Islamic Jihad Union and al-Qaida. The illicit sale of weapons is common in the area, and locals are drawn into human trafficking rings either for forced labor or sexual exploitation.

Over the past few decades, the means by which terrorist organizations are funded has dramatically changed. The breakup of the Soviet Union eliminated the major state funders. And after 9/11, the U.S. led efforts to clamp down on money laundering and other financial operations that supported terrorism. Those changes have left terrorist groups more dependent on organized crime.

“They have been either engaged in criminal activities themselves or form alliances and partnerships with criminal organizations,” Omelicheva said.

The connection between terrorism and organized crime can be a complex one, Omelicheva said. For example, drug dealers and traffickers can be recruited while in prison to be terrorists, creating a hybrid identity.

Deciphering if acts of violence are terrorism or organized crime can be difficult. In some tumultuous areas of Central Asia, bombings or assassinations have been attributed to terrorism when they were actually part of a drug turf war.

“If we misrepresent those type of violent activities as terrorism, we are giving the wrong idea of what is going on,” Omelicheva said. “The policy implication is that funds get misplaced and we are coming up with solutions that don’t match the nature of the problem."

The KU Institute for Policy & Social Research assisted with the development of the grant proposal and will manage the DOD award. IPSR is the KU's designated social science research center and has ongoing research focused on human trafficking.