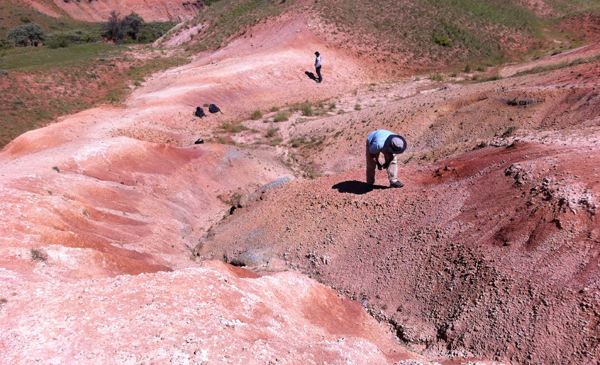 LAWRENCE — Supported with a five-year, $580,000 award from the National Science Foundation, scientists from the University of Kansas are departing this month to investigate how climate, plate tectonics and other factors influenced evolution by bringing species together in modern-day Turkey 42 million years ago during the Eocene epoch. “What we learn could tell us a lot about the future of natural environments and the distribution of species as the planet becomes warmer through time,” said Christopher Beard, senior curator at KU’s Biodiversity Institute and Foundation Distinguished Professor of Ecology & Evolutionary Biology.

Beard and his colleagues will focus on the “Middle Eocene Climactic Optimum,” an interval of warmer temperatures around the globe that coincided with shifts in plate tectonics to create a new setting for mammals in the area now comprising Turkey.

Indeed, a breakdown of longstanding environmental barriers during this time may have brought about a migration of animals from Asia into Africa, including anthropoid primates that were the distant ancestors of humans. “We’ve always suspected that changes in the Earth’s physical environment must have a major impact on biological evolution, but this has rarely been addressed in great detail in the fossil record,” Beard said. “Our Turkish project is designed to do this.”

The researchers will begin fieldwork in Turkey this month, joining Turkish colleagues from Eskisehir Osmangazi University. Any fossil specimens they unearth will come back to KU for analysis and then be returned to Turkey to be housed in a museum. Beard said members of the team already have discovered specimens relevant to research into Eocene biology in the region.

“The most important discovery we’ve made so far took place in central Anatolia,” he said. “There, we found an ancient community of fossil mammals that is utterly unique for two reasons. First, many of the fossil species are completely unlike any other fossil mammals we’ve ever seen. Second, even in cases where the Turkish fossils are somewhat familiar, they occur alongside other types of mammals they’ve never been found with before. One of the groups of mammals we’ve found is an extinct group called embrithopods, which look vaguely like rhinos except they had two nasal horns that diverged from each other in a Y-shaped pattern.” The KU researcher said embrithopods are commonly found in Africa, but there they typically occur alongside African mammals. By contrast, in Turkey the embrithopods lived among mammals obviously related to species from Europe and Asia.

“We’ve stumbled upon a four-dimensional jigsaw puzzle with many missing pieces, and we’re trying to determine how these different mammals got to be in Turkey, when they got there, and what this tells us about bigger and more fundamental evolutionary processes,” Beard said.

But piecing together this puzzle will require expertise from the traditional fields of structural geology, paleontology and paleoclimate.

To better understand the interplay between the tectonic and climatic evolution of Turkey, Beard has partnered with co-investigator Mike Taylor, associate professor of geology. Taylor is an expert in collisional processes related to the Indo-Asian collision and plateau-building processes.

“The Turkish-Iranian plateaus lie to the west of the Himalayas and Tibet, and to me represent a more youthful stage of mountain building, so I'm very excited to understand this particular tectonic setting and how it may relate to what Tibet may have looked like prior to 55 million years ago, when India collided with the southern margin of Eurasia,” Taylor said.

The team is focused in part on the role the region played in the evolution and migration of anthropoid primates — ancient forerunners of Homo sapiens. Thus, the project could shed light on the little-understood movement of these primates precisely at the moment that Turkey was being assembled geographically — at least two tectonic “microplates” collided with what is now the northern part of Turkey around this time — making this region a crucial juncture of modern day Asia, Europe and Africa.

“Currently, all we know is that anthropoid primates lived on either side of Turkey during the latter part of the Eocene. They first evolved in Asia  — probably Southeast Asia — and made their way to Africa prior to the end of the Eocene,” Beard said. “Africa and Asia were separated by a seaway that connected what is now the Mediterranean Sea with the Indian Ocean at that time. Turkey may or may not have been an island in this sea, close to the southwest edge of Asia. So it’s at least possible, and perhaps likely, that anthropoid primates and other mammals used Turkey as a stepping stone to get across this sea on their way to Africa.”

The researchers said the work could inform science about the role climate change played in mammalian evolution and be especially relevant today, when temperatures are again shifting due to global climate change.

“We want to test whether the extreme climatic conditions of the Middle Eocene Climatic Optimum led to the colonization of Africa by early anthropoids and other mammals,” Beard said. “If our ideas are correct, then we’ll be able to show that climate change has a much greater impact on biological evolution than we ever thought previously.”

Grégoire Métais (Museum National d’Histoire Naturelle, Paris) and Faruk Ocakoğlu (Eskişehir Osmangazi University) are the primary collaborators with the KU team. The project also will afford research opportunities and training for graduate students. Beard said he hoped the project would help boost interest and respect for paleontology in the Middle East.

“Traditionally, paleontology and evolutionary biology have been downplayed across the Middle East, but this area holds a vast and highly important fossil record that needs to be studied,” he said. “I’m hoping that our project contributes toward greater mutual understanding and collaboration as well as blazing some trails with respect to the scientific resources in the region. We’ve known for decades that paleontology can be one of the first scientific disciplines that attracts the attention of kids when they are young. If we can show kids in the Middle East that their own part of the world has something important to teach us about the history of life on Earth, I’m guessing some of them will be inspired to pursue careers in science.”

Map: Anatolia in the middle Eocene, at the biogeographic crossroads among Africa, Europe and Asia. Possible pathways for mammalian dispersal are shown in red.

Fossils: With Eocene fossils like this one, the KU team is looking at how different mammals arrived in Turkey and how that ties to fundamental evolutionary processes.

Bottom image: The team will investigate the interplay between tectonic, climatic and biological evolution in Turkey.