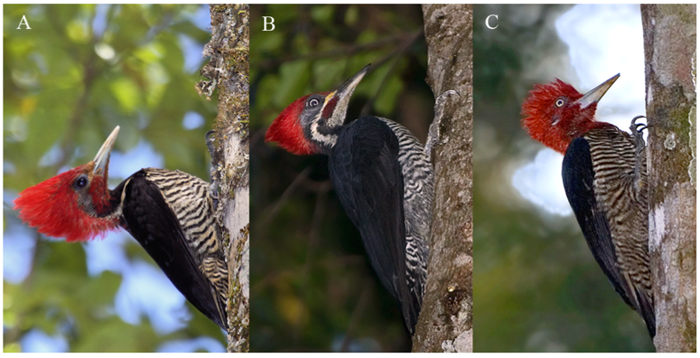 LAWRENCE — To look tougher, a weakling might shave their head and don a black leather jacket, combat boots and a scowl that tells the world, “don’t mess with me.”

But this kind of masquerade isn’t limited to people. Researchers recently have revealed a timid South American woodpecker that evolved to assume the appearance of larger, tougher birds. 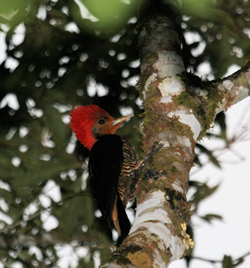 Visual mimicry lets the Helmeted Woodpecker (Dryocopus galeatus) live on the threatened Atlantic forest turf of two bigger birds — the Lineated Dryocopus lineatus and Robust (Campephilus robustus) woodpeckers — reducing the likelihood of being displaced in an area of foraging.

“Because of this, it has the advantage of foraging in the same areas as the birds it’s mimicking, with those birds not being aggressive to this smaller woodpecker,” said Mark Robbins, ornithology collection manager with the University of Kansas Biodiversity Institute.

Robbins is co-author of a forthcoming paper in The Auk: Ornithological Advances showing that the Helmeted Woodpecker not only has deceived competing woodpeckers but also a previous generation of ornithologists who misclassified the bird based on the appearance of its plumage.

“It’s very similar in pattern to these other woodpeckers,” Robbins said. “In the 1980s, a monograph called ‘Woodpeckers of the World’ used museum specimens to assume relationships, and that has misled ornithologists across the board. Looking only at plumage has misguided us again and again.”

One of Robbins' initial suspicions that the Helmeted Woodpecker wasn’t a close relative of the Lineated Woodpecker came in 2010 at an international conference of ornithologists in São Paulo, Brazil. 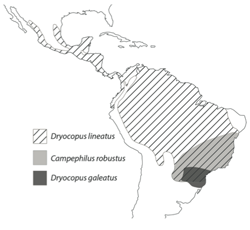 “Some friends and I went off to see Brazilian birds in Atlantic Forest, and we really wanted to see Helmeted Woodpecker,” he said. “One morning everyone was eating breakfast, but I was out by a lagoon. I heard its call, and went flying back inside through the doors saying, “There’s a Helmeted Woodpecker!” So there was mass rush out the doors, and we spent over an hour following this woodpecker. I was thinking, ‘I don’t think this is a Dryocopus’ — and later thought it might be a member of another woodpecker genus."

Next, Robbins teamed with two colleagues, KU alumnus Brett Benz of the American Museum of Natural History (lead author on the Auk paper) and Kevin Zimmer of the Los Angeles County Museum. They sought a deeper understanding of the Helmeted Woodpecker, so they conducted genetic analysis of the bird using state-of-the-art technology at KU and the AMNH.

The question was whether the Helmeted Woodpecker belonged in the genus Dryocopus, as the bird’s appearance would have it, or if a look at the woodpecker’s DNA would place it more appropriately in genus Celeus.

“Background genetic work on placement of this bird was performed using tissue from toe pads from specimens at the L.A. County museum that had been collected over 60 years ago,” Robbins said.

According to the authors, the results of the phylogenetic analyses “unequivocally” place the Helmeted Woodpecker within Celeus, showing the bird has matched its appearance with the “distantly related” Dryocopus lineatus with a “remarkable resemblance in plumage coloration and pattern.”

Without modern genetic analysis, the Helmeted Woodpecker’s evolutionary strategy of mimicking competing birds would have been hidden to science.

“Only in last 15 years or so could this have been revealed,” Robbins said.

However, Robbins said that intense farming within the threatened Atlantic Forest habitat of the Helmeted Woodpecker has put survival of the species into question. He hopes the discovery of the bird’s cryptic mimicry can call attention to destruction of its South American habitat.

“It's only found in southeastern Brazil, eastern Paraguay and extreme northern Argentina,” Robbins said. “Much of that forest is gone. It’s a biome that’s been particularly degraded, and this woodpecker had declined considerably due to deforestation of the Atlantic Forests. It’s threatened, has been misplaced phylogenetically and is mimicking bigger, more aggressive birds.”

According to the KU researcher, the deforestation is due to farming of soybeans and sunflowers.

“There are some places in eastern Paraguay where this bird once lived in Atlantic Forest where now it looks more like Kansas,” Robbins said.

The Monell Molecular Laboratory and the Cullman Research Facility in the Department of Ornithology at the American Museum of Natural History supported this research. The Rudkin Scholarship provided support for senior author Benz during his time at KU.

Top photo: Images of adult male (A) Dryocopus galeatus, (B) Dryocopus lineatus erythrops and (C) Campephilus robustus. Although highly similar in appearance, D. galeatus weighs less than half of either D. lineatus or C. robustus and is 22-25 percent smaller in length respectively. Photographs are reproduced with permission from K. J. Zimmer, taken in Intervales State Park, São Paulo, Brazil, and Ricardo Jensen Moller (B, C) photographed in Misiones, Argentina.