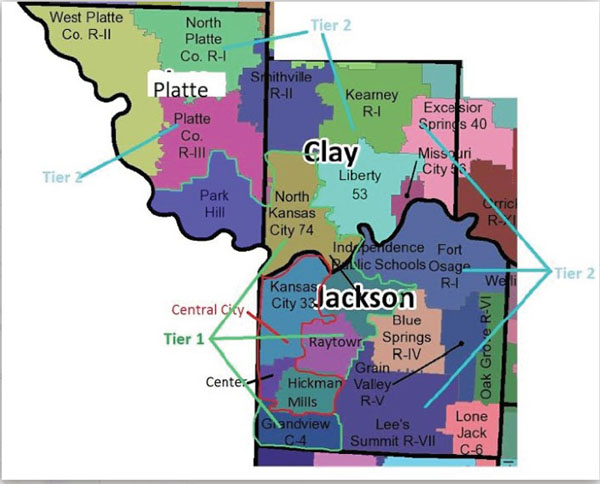 LAWRENCE – Students who move to new schools are likelier to have lower test scores and more absences, research at the University of Kansas found.

Using data from the Missouri Department of Elementary and Secondary Education, the Kansas City Area Education Research Consortium (KC-AERC), which is housed at KU, looked at how many students transferred in and out of schools in three counties in the Kansas City, Missouri, metropolitan area. Of the more than 160,000 students studied, one in five had moved between June 2014 and May 2015. More than 6,000 students had changed schools two or more times.

“If you are a teacher who has a child who even moved one time during the school year, you need to be cognizant of the fact that they are probably missing more instructional days than other students and are less likely to be proficient in math and communication arts,” said Leigh Anne Taylor Knight, executive director of KC-AERC and one of the study’s lead researchers.

On average, students who transferred schools missed four instructional days, and 25 percent of those students were absent for six or more days between moves. Black students and other students of color, English language learners and students from poorer neighborhoods were more likely to move to different schools. Homeless students were 200 times more likely to change schools.

“The educational impact of student mobility is felt by both the students who are mobile and the students who are in the classroom receiving the mobile students,” said Donna Ginther, who is the director of the Center for Science, Technology & Economic Policy, which oversees the KC-AERC, as well as a KU economics professor, who worked on the study.

The KC-AERC’s findings were presented earlier this month at the Kansas City GradNation Summit, which brought together education and community leaders to address student mobility in the region. The summit was a partnership with America’s Promise Alliance and GradNation program, which works to raise graduation rates across the country.

An overview of the study and Taylor Knight's presentation at the summit can be viewed here.

Previously, the most notable research on student mobility had used data on the number of total transfers in and out of school districts or school buildings. This research is among the first to use individual student level data, with all identifying information removed, to track how a move directly relates to a student’s absence, academic achievement and subsequent moves.

The three counties represented in the data include urban, suburban and rural areas and provide schools with different mixes of socioeconomics and ethnicities.

“This is a microcosm for the rest of the nation,” Taylor Knight said.

Researchers hope further analysis will identify school districts that have maintained high academic achievement despite having high student mobility rates. They are looking for policies or practices that have been implemented in those schools that would improve a new student’s assimilation. At schools where high student mobility is associated with dramatic academic decline, researchers want to study what factors contribute to the drop.

“The data is so powerful that this could turn into a much fuller research agenda,” Ginther said.

Formed in 2008, the KC-AERC brings together social science, science and education researchers from KU, Kansas State University, University of Missouri-Columbia and University of Missouri-Kansas City to collaborate with school districts in the Kansas City metropolitan area. The goal is to form an educational research consortium for the study and improvement of student achievement across the region. The KC-AERC is housed under KU’s Center for Science, Technology & Economic Policy, which is one of six research centers at KU’s Institute for Policy & Social Research.