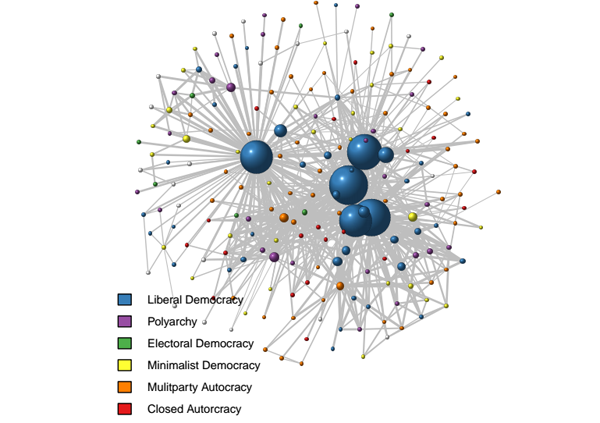 LAWRENCE — The type of governance of a nation can predict its citizens’ access to the Internet and the value of that country’s connections to other nations around the world, a new study has found. Liberal democracies dominated the global Internet network in both 2002 and 2011, followed by polyarchies and electoral democracies, while autocracies scored the lowest.

Hyunjin Seo, assistant professor of strategic communication in the William Allen White School of Journalism & Mass Communications at the University of Kansas, and Stuart Thorson of Syracuse University have authored a study that analyzed Internet connection data for 200 countries from 2002 to 2011. Scholars have long been interested in the role of the Internet in determining how open a country is. However, previous studies have not considered the connection a country has with other countries and the value of the global Internet network.

“The findings have been inconsistent. We wanted to look at countries’ Internet access at domestic and international levels while considering regime type and controlling for economic development and number of Internet users per 100 people,” Seo said.

Seo and Thorson analyzed each of the 200 countries’ bandwidth and eigenvector centrality. The former measure takes into account the size of Internet connections between countries, while the latter analyzes how many connections with other nations a country has and how important they are. For example, the connection between the United States and Great Britain is a strong connection, given the high shared bandwidth, per capita Internet use and economic power of the two.

To account for changes over the 10 year period, Seo and Thorson measured the following variables for each country: Set bandwidth amount at domestic and international levels, population, gross national income, number of Internet users per 100 people, and degree and eigenvector scores.

The first autocracy is China at 12. The country is the biggest outlier in the study as it is an economic powerhouse with important connections to other nations but with low Internet access among citizens, high gross national income and a high degree of censorship of information. The next highest nondemocracy was Vietnam at 55.

Among the key findings were changes over the 10-year period. In 2002 data, the United States, Great Britain, France and Canada topped the list for quality domestic and international connectivity. The researchers analyzed data on bandwidth from TeleGeography, on democracy from Freedom House and on gross national income and population from World Bank World Development Indicator data.

Seo will present the research at the Hawaii International Conference on System Sciences, known as HICSS, Digital and Social Media Division in January.

The findings also show that Iran and North Korea, two autocratic nations that severely limit access to the Internet, were at the bottom of the list in both 2002 and 2011. In the case of North Korea, it is also one of the world’s poorest nations.

“Our results show that it is important to look beyond country-specific variables in this type of research and take into account how connected or central the country is within the overall global Internet,” Seo and Thorson wrote. “At the country level our results are largely consistent with prior literature. Regime type and economic development do matter for Internet adoption with richer and more democratic countries typically showing a higher degree of adoption (as measured by Internet users per 100) than do less democratic and poorer countries.”

Future research will examine citizens in countries with high centrality and easy access to the Internet. The authors speculate they have a greater capacity to generate ideas in greater numbers, thereby driving economic growth. Testing whether access to “the global bazaar of ideas” is more important than simple population will be a key next step, the researchers said.

“We are very interested in connection with other countries because it’s about the flow of information,” Seo said. “An open exchange of ideas is important.”

Image: This graph shows the eigenvector centrality, or quality of Internet connection, in the global network. Liberal democracies, represented by the blue dots, have the strongest connection in 2011, followed by several other types of regimes.

Search options »
Subscribe to KU Today
KU in the news
Bloomberg — Mon, 01/17/2022
MLK Day to draw divisions as politicians misuse his words
The Los Angeles Times — Mon, 01/17/2022
What did King, a Black clergyman, know about foreign policy? He knew plenty (opinion)
RT @ksgeology : The KGS will develop a computer program to study groundwater conservation programs. It will allow researchers, irrigators an…
«»
Follow us on Twitter »
Why KU
Apply »
One of 34 U.S. public institutions in the prestigious Association of American Universities
44 nationally ranked graduate programs.
—U.S. News & World Report
Top 50 nationwide for size of library collection.
—ALA
5th nationwide for service to veterans —"Best for Vets: Colleges," Military Times