LAWRENCE – When women’s health clinics close because of government funding cuts aimed at abortion providers, fewer women seek lifesaving preventive care that can identify health threats such as cancer, research from the University of Kansas shows. 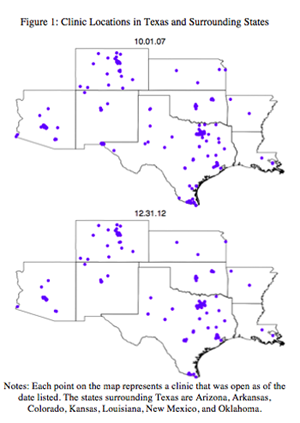 David Slusky, assistant professor of economics at KU, and Yao Lu of the Analysis Group in Boston found that when the closure of a women’s health clinic resulted in a 100-mile increase in driving distance to the next nearest clinic, the annual rate of women receiving preventive screenings dropped by 11 percent for breast exams, 18 percent for mammograms and 14 percent for Pap tests. The findings also suggest that a clinic’s closure affected less-educated women the most.

“These organizations are providing services that we as a country generally care about and think are a good investment,” Slusky said.

The research will be published in the article “The Impact of Women’s Health Clinic Closures on Preventive Care,” which has been accepted by the American Economic Journal: Applied Economics. The research was partially supported through fellowships from the National Science Foundation and the Agency for Healthcare Research and Quality.

In the first study to quantify how the closure of women’s health clinics affects the number of women receiving preventive care, Slusky and Lu focused on Texas and Wisconsin. In 2011 both states adopted legislation that cut funding to women’s health clinics, particularly those whose organizations were affiliated with abortion providers.

From 2007 to 2012, the number of clinics in the network decreased by 25 percent in Texas. While Wisconsin didn’t see a drop as dramatic as Texas, a number of clinics closed in the state after the 2011 funding cuts. Clinics also closed in neighboring states.

Then researchers then looked at Centers for Disease Control and Prevention’s public health survey data that included questions about women’s preventive care and the respondents’ ZIP code. The ZIP codes were matched with the nearest clinic, and from there the researchers could assess if screening patterns changed after a clinic closed. 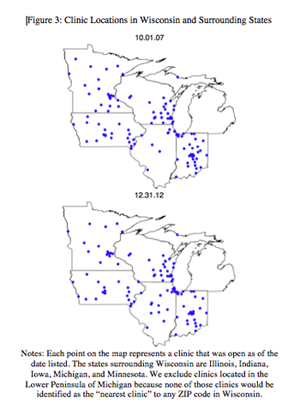 The data showed that when the distance to a women’s health clinic drastically increased, fewer women sought preventive care. Women with less education were affected the most by closures. For women with a high school diploma or less, a 100-mile increase in driving distance meant a 37 percent drop in breast exams, 64 percent drop in mammograms and 14 percent drop in Pap tests.

Because less-educated women are more likely to be uninsured or underinsured and rely on charity care, Slusky said, they have fewer options for care. Meanwhile, their schedules are less flexible, and they may lack the means to drive an extra 100 miles to a clinic.

“It is no longer a defensible position to say there are no other health care costs to cutting public funding for any organization affiliated with abortion ­— that it only affects abortion,” Slusky said.