LAWRENCE — Imagine shoveling soil to create a backyard garden plot and unearthing a rock embossed with the fossil remnant of a creature you’ve never seen before. It looks like something out of the ocean, but you live in the Midwest.

Is it a rare fossil from hundreds of millions of years ago or just the trash from a previous homeowner 50 years back? 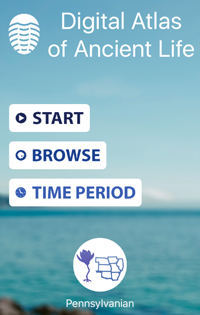 Now, a free app developed at the University of Kansas with support from the National Science Foundation will enable anyone with an iPhone or iPad to discover and classify fossils with the eye of a scientist. The Digital Atlas of Ancient Life is available now at no cost for download from iTunes.

“We’re interested in making our science more accessible to the general public,” said Bruce Lieberman, professor of ecology and evolutionary biology, who is the primary investigator on the NSF grant. “We know people are captivated by paleontology and interested in fossils. The app links to pictures, maps and information about how long ago fossils occurred. We thought, ‘Hey, when people are out finding fossils, they’re not on their computer.’ They might be out walking, pick up a fossil and think, ‘Cool! What species is this? Where have others like this one been found?’”

Lieberman, who also serves as senior curator of invertebrate paleontology at the Biodiversity Institute, said the new app builds on a strong KU legacy of digitizing its collections so they can be of use to people around the world.

“It’s a way for anyone to find species in the field and learn something about them, be they farmers, amateur paleontologists, teachers of earth sciences or biologists,” Lieberman said. “Certainly some professional paleontologists could use it. We wanted to distill scientific information gathered over many years. We might have some scientist in Russia who wants to see fossils in my cabinets, but they don’t have airfare and couldn’t travel to Kansas. Or there might be a rancher in Dodge City with a fossil who can’t drive to Lawrence and see what’s in our collection. Now we can provide the data and allow them to dig outside in the natural environment in Kansas or anywhere, then instantly access pictures and explanations of what fossils they’ve found and what they’re related to.” 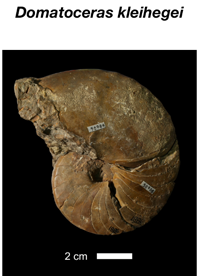 The researcher said his team had elementary, middle school and high school teachers in mind when they developed the new app, hoping to give instructors a practical tool for engaging students with the wonders of the natural world.

“For school groups a teacher might be able to say, ‘Hey we’re going on this field trip and we can find these specific fossils in this place,'” Lieberman said. “Outside a WiFi zone, they can show student pictures of fossils and where they occurred. Like with Google Maps, with this app you can zoom down to any geographic scale. A teacher can look at a map of specimens and say, ‘This one was found on Highway 59 near the junction with 458 — and we can go back again and find another one.’”

The Digital Atlas of Ancient Life app focuses on fossils with origins in the Pennsylvanian period, about 290 million years ago, with fossils common to Kansas and the Midwest; the Ordovician period, with fossils often found near Ohio; and the Neogene period with fossils usually located the Southeastern U.S.

“The best thing to do is look around a road cut or a little quarry where rocks are exposed so you don’t have to do a lot of digging,” he said. “In Kansas, many of those yellow rocks that you see are packed with fossils — some are 100 percent fossils. Of course, don’t stop along a busy stretch of road or an interstate. But on all other roads, at least in Kansas, as long as you’re cautious, those layers of yellow rock expose fossils at road cuts. You can just bang a fossil out.” 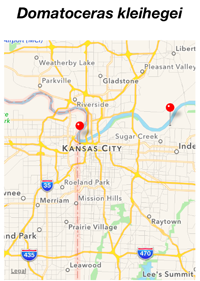 Lieberman’s collaborators on the project include Alycia Stigall at Ohio and Jonathan Hendricks at San Jose State University, along with Jim Beach at KU. Rod Spears, former staffer at the Biodiversity Institute, and his son Zach programmed the app. The researchers have published a scholarly description of the project in the online peer-reviewed journal Palaeontologia Electronica.

But according to Lieberman, the real aim of the work was to provide everyday people a digital tool to connect them to fossils and inspire curiosity about our place in the universe.

“The most fascinating thing to me is to think about how the world was so different before humans were here, to be a thousand miles from the nearest ocean but pick up a shell of a clam that once lived by the side of the seashore,” he said. “It puts human life into perspective to think about so much history and time and change. There’s evidence that fossils have fascinated humans for tens of thousands of years. We’ve found prehistoric encampments with fossils people had brought from hundreds of miles away. We’re intrigued by this connection to place and history, and this app is looking at history at a large scale. It connects us to the world and makes us think, ‘Why are we here, and how did we get here?’”