LAWRENCE — University of Kansas biologist David Alexander grew up in Dayton, Ohio, the hometown of the flight-pioneering Wright brothers — so it’s only natural he became fixated with aviation from a young age, developing a lifelong passion for airplanes. 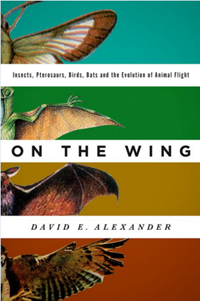 Later, in graduate school, a mentor in the zoology department who knew of Alexander’s love for aircraft suggested he “get into animal flight” as a line of scholarly investigation.

“My adviser told me, ‘You need to work on something you can get excited about,’” Alexander said.

It was great advice. Alexander has spent the past 20 years focusing largely on animal flight in the Department of Ecology and Evolutionary Biology at KU, and this month he published his third book on the subject, titled “On the Wing: Insects, Pterosaurs, Birds, Bats and the Evolution of Flight” (Oxford University Press, 2015).

His new book traces the evolution of animal-powered flight since its advent in the fossil record some 350 million years ago. Alexander tracks the four groups of flying creatures: insects, pterosaurs, birds and bats. He said a central difference between these flyers could be found in their legs.

“Insects flew first,” he said. “They’re different from all other flying animals because they didn’t give up legs to evolve wings. Primitive insects had six legs, and ones that evolved wings have six. They still can be completely terrestrial. Birds gave up one pair of legs but kept the other pair separate from wings. There are birds that have completely lost flight like penguins and ostriches. Then you have bats where hind legs are incorporated into wing structure and incorporated into the flapping mechanism. No bats or pterosaurs evolved loss of flight.”

Despite such biomechanical differences, the four flying groups that Alexander covers in “On the Wing” all gain key advantages from their ability to take to the sky.

“A flying animal typically flies 10 times as fast as a running animal can run,” he said. “As a result, they’re more energy-efficient. They can go a longer distance on less fuel. And they have a search advantage. Up high, you can look down and take in a lot of area, whereas on the ground, vision is much more limited. Flight allows them to colonize new areas. It allows them to cross barriers that terrestrial animals can’t, like flying across oceans for migrations. There are tiny birds, sandpiper relatives, that fly across the arctic ice cap and Greenland for their migration.”

Asked about the most extraordinary forms of flight, Alexander gave examples of animal flyers that sleep, bathe and even mate while airborne.

“Both dragonflies and many hawks actually mate while on the wings — and they usually have courtship rituals that involve flight,” he said. “Both individuals do particular maneuvers, and eventually they join together. What’s so cool is that they do incredibly acrobatic things. Eagles lock talons and spiral down, and then just before they get to the ground they let go, fly up and repeat the process.”

Alexander said some birds like swifts and swallows are thought to sleep and bathe “on the wing.”

“They fly up pretty high and fly in slow circles and gradually descend, supposedly sleeping while they descend, then they wake up and do it again,” he said. “They also bathe by flying low over a pond and dipping their belly in the water as they fly over the surface.”

As for prehistoric pterosaurs, Alexander said researchers are left to reckon the method of their flying based on the fossil record.

“Fossils don’t tell us some of the things we’d like to know about how pterosaurs flew,” he said. “We make inferences based on their structure, but the biomechanics are on the mysterious side.”

“On the Wing: Insects, Pterosaurs, Birds, Bats and the Evolution of Animal Flight” is available from Amazon.