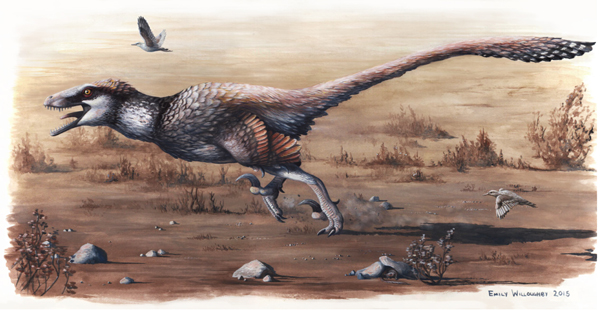 LAWRENCE – A research team led by a University of Kansas alumnus has identified a new giant raptor, the largest specimen ever found with wing feathers.

Named Dakotaraptor, the fossil from the Hell Creek Formation in South Dakota is thought to be about 17 feet long, making it among the largest raptors in the world.

Robert DePalma, curator of vertebrate paleontology at the Palm Beach Museum of Natural History and lead author of the research, led the expedition to South Dakota where the specimen was found. At the time, he was a graduate student studying with former KU paleontology professor and curator Larry Martin, who died in 2014.

“This Cretaceous period raptor would have been lightly built and probably just as agile as the vicious smaller theropods, such as the Velociraptor,” De Palma said. He added that the both fossils showed evidence of “quill knobs” where feathers would have been attached to the forearm of the dinosaur.

This also demonstrates that flightlessness evolved several times in this lineage leading to modern birds.

The peer-reviewed research was published Oct. 30 in Paleontological Contributions. In addition to DePalma, Martin and Burnham, co-authors include Peter Larson of the Black Hills Institute of Geological Research and Robert Bakker of the Houston Museum of Natural Science. The specimen is being researched and curated by DePalma’s research team in Florida, associated with the Palm Beach Museum of Natural History.