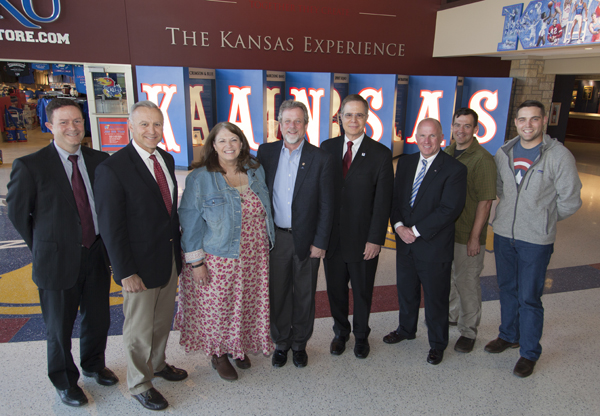 LAWRENCE — A former University of Kansas adjunct lecturer will provide scholarships to help military veterans at KU in honor of his son, who was killed in action in Afghanistan.

Army Specialist Spencer C. Duncan was serving the U.S. as a Chinook helicopter repairman, crew chief and door gunner when his helicopter, Extortion 17, was shot down Aug. 6, 2011, ending his life and those of 37 other U.S. troops and support personnel.

Dale Duncan, who worked for almost 14 years in the School of Architecture, Design and Planning, created the Spencer C. Duncan Make it Count Foundation.

With revenue from the Make it Count 5K race each August in Olathe, Dale Duncan and his wife, Megan Duncan, have provided scholarships that directly benefit the lives of other servicemen and women who are in college.

Last month, the Duncans presented Provost Jeff Vitter and law student Derek Kandt, president of KU’s Student Veteran of America, with a check for $5,000 at Allen Fieldhouse. The Fieldhouse was chosen for the site of the donation because of Spencer Duncan’s lifetime love of the Jayhawks. One of his parents’ favorite keepsakes is an old Jayhawk ball cap that Spencer Duncan carried to a basketball game in Allen Fieldhouse when he was about 5 years old. Spencer Duncan was able to get the cap signed by several players and coaches then, and the cap remains a treasured item to this day for the Duncans.

Eligible KU student veterans will soon have access to a scholarship to help defray the cost of textbook purchases. The Make It Count Project funds come from personal donations, corporate gifts and the entry fees and pledges of runners taking part in the race.

“We are showing honor for the brave men and women who have given and who continue to give of themselves,” Dale Duncan said. “After all, the single greatest resource of this country is the people who live here and believe in life, liberty and the pursuit of happiness.”

For more information about Spencer Duncan or the Make it Count organization, go to http://www.makeitcounttoday.org/.