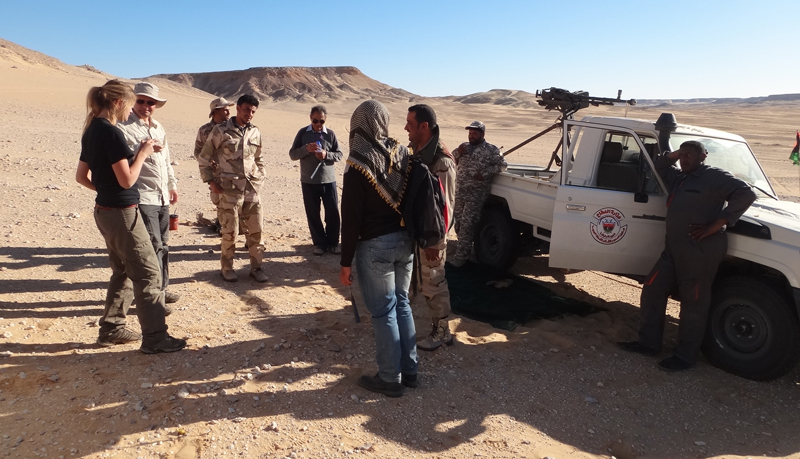 LAWRENCE — During upheaval in Libya in 2013, a window of opportunity opened for scientists from the University of Kansas to perform research at the Zallah Oasis, a promising site for unearthing fossils from the Oligocene period, roughly 30 million years ago.

From that work, the KU-led team last week published a description of a previously unknown anthropoid primate — a forerunner of today’s monkeys, apes and humans — in the Journal of Human Evolution. They’ve dubbed their new find Apidium zuetina.

Significantly, it’s the first example of Apidium to be found outside of Egypt.

“Apidium is interesting because it was the first early anthropoid primate ever to be found and described, in 1908,” said K. Christopher Beard, Distinguished Foundation Professor of Ecology and Evolutionary Biology and senior curator with KU’s Biodiversity Institute, who headed the research. “The oldest known Apidium fossils are about 31 million years old, while the youngest are 29 million. Before our discovery in Libya, only three species of Apidium were ever recovered in Egypt. People had come up with the idea that these primates had evolved locally in Egypt.”

Beard said evidence that Apidium had dispersed across North Africa was the key facet of the find. He believes shifting climatic and environmental conditions shaped the distribution of species of Apidium, which affected their evolution.

“We’ve found evidence that climate change — not warming, but cooling and drying — across the Eocene-Oligocene boundary probably is the root cause in kicking anthropoid evolution into overdrive,” he said. “All of these anthropoids, which were our distant relatives, were living up in the trees — none of them were coming down. When the world became cooler and dryer in this period, what was previously a continuous belt of forest became more fragmented. This created barriers to gene flow and movement of animals from one part of forest to what used to be adjacent forest.”

With a forest broken up, there was an inhibition of gene flow that through time resulted in speciation, or the creation of new species, according to the KU researcher.

Beard said that Apidium zuetina would have been physically similar to modern-day squirrel monkeys from South America, but with smaller brains, and would have dined on fruits, nuts and seeds.

“We know that Apidium was a very active arboreal monkey, a really good leaper,” he said. “We know they actually had fused lower-leg bones just above the ankle joint. That’s really unusual for anthropoid primates, and the only reason for it to happen is because you like to jump a lot, as it stabilized the join between those bones and the ankle.”

The team identified Apidium zuetina through detailed analysis of its teeth.

“All of the fossils we have so far are just teeth, not even jaw bones — but fortunately, the teeth of these anthropoids are so distinct and diagnostic that they function like fingerprints at a crime scene,” Beard said. “Studying details of cusps and crests on teeth, we can determine evolutionary relationships. It might sound like thin evidence, but I suspect even with whole skeletons we’d still be focused on teeth to determine relationships. This is because teeth evolve rapidly in response to shifting diets, while an animal’s skull and skeleton typically evolves more slowly. Fortunately for paleontologists, teeth are well-documented in the fossil record because tooth enamel is the hardest part of a mammal body, durable and easy to fossilize.”

Yet, the researchers chose to name Apidium zuetina not after any of its physical characteristics, but after the Zuetina Oil Company that made the dangerous Libyan fieldwork possible.

“Without their logistical support, we couldn’t have done this work at all,” Beard said. “We did this just after end of the Libyan civil war that led to the overthrow of Gadhafi.”

Beard said the discovery took place during a brief lull in violence in Libya. But the trip to the Zallah Oasis was precarious nonetheless.

“We knew it was risky, but we thought we could go because of our local collaborator, Mustafa Salem, a geology professor at Tripoli University,” he said. “He’s revered as a father figure among Libyan geologists. An oil facility was close to some interesting sites, and after Mustafa contacted a former student who was working there, they provided our team with charter flights to an airstrip near the oil facility. Without that alone, we couldn’t have done our fieldwork — the roads are too dangerous with bandits and the like. They also gave us lodging, food, water and security.”

“They never asked for a nickel from us in return,” said the KU researcher. “There was an Islamist attack on a gas facility at the same time near the Algerian-Libyan border, and they killed 30-40 workers. So the security protected us and potentially saved our lives.”

Beard’s research collaborators were Pauline M.C. Coster of KU; Yaowalak Chaimanee and Jean-Jacques Jaeger of the Université de Poitiers in France; and Mustafa Salem of Tripoli University in Libya.

Photos: Above, armed guards accompanied researchers during their dangerous Libyan fieldwork. Below: Researchers analyzed fossil teeth to identify Apidium zuetina as a species new to science. Map: (A) location of Zallah Oasis in Libya’s Sirt Basin and (B) closeup of Zallah Oasis and surrounding area. 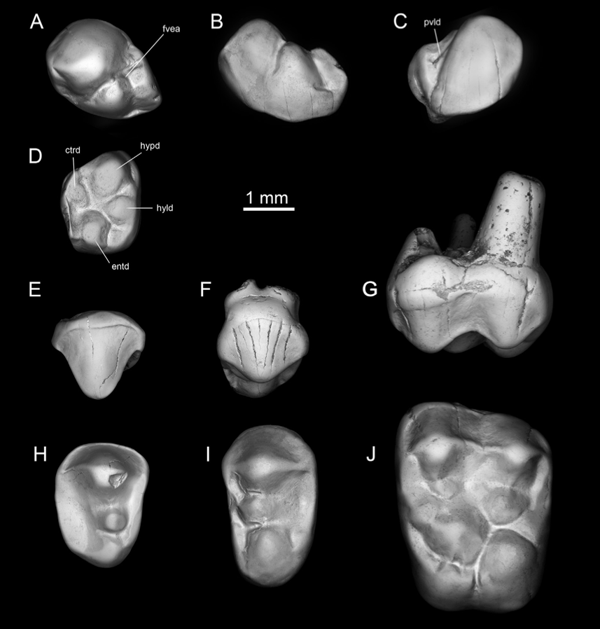