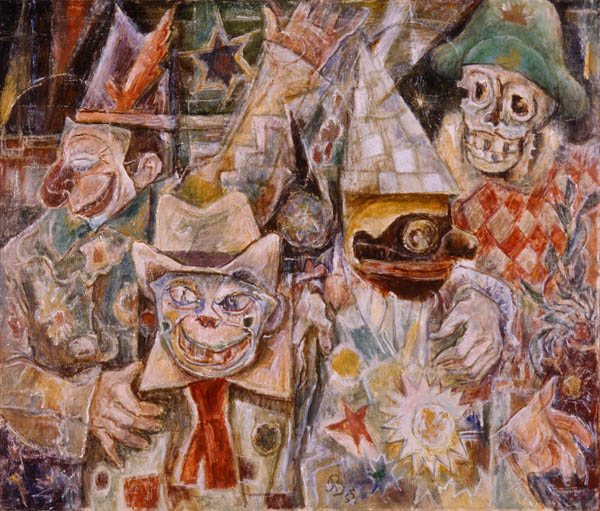 LAWRENCE – Artist Albert Bloch is best known for being the lone American to show in the first Blue Rider exhibition, which in 1911 helped lay the foundation for modern art. But a University of Kansas art history professor argues Bloch’s best work didn’t come until decades later when he was painting exclusively in Lawrence. 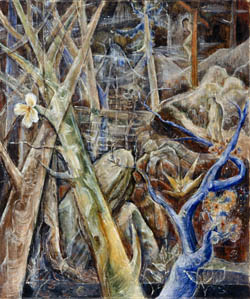 “The 1940s and 1950s is when Bloch came into his own,” said David Cateforis, chair of the Kress Foundation Department of Art History at KU. “He is making paintings that I wouldn’t compare to anything else in American art history.”

Cateforis is author of the 132-page catalog, “Albert Bloch - Themes and Variations: Paintings and Watercolors from the Albert Bloch Foundation,” which accompanies an exhibition of the same name showing at the Lawrence Arts Center until Jan. 2, 2016. Cateforis and Ben Ahlvers, Lawrence Arts Center exhibitions director, curated the show, which follows a 2014 exhibition of Albert Bloch’s prints and drawings at the Spencer Museum of Art and is complemented by “Albert Bloch: Scenes from the Life of Christ,” on view at Washburn University’s Mulvane Art Museum until Jan. 23, 2016.

A St. Louis native, Bloch lived in Munich from 1909 to 1919, associating with the founding members of the Blue Rider group, Wassily Kandinsky and Franz Marc, and exhibiting extensively. He returned to the United States permanently in 1921 and in 1923 took a position at KU as the head of the department of drawing and painting.

In 1997, scholars took a renewed interest in Bloch’s work with an exhibition of his art at the Nelson-Atkins Museum of Art in Kansas City. The exhibition then traveled to Wilmington, Delaware, and Munich. In the same year, Cateforis, KU German professor Frank Baron and Helmut Arntzen edited the book “Albert Bloch: Artistic and Literary Perspectives.” Since then several major art museums across the country have displayed his work.

The Lawrence Arts Center catalog and exhibition holds nearly five decades of Bloch’s work from his early years in Germany when his early experience as a caricaturist is evident to his final years in Lawrence, when an extensive use of earth colors, whites and blues pervades his paintings. Many of the watercolors and a few of the paintings in the exhibition and catalog have never been viewed in public before as they were tucked away in Bloch’s studio for more than half a century.

Throughout his career, Bloch returns to familiar themes – portraits, landscapes, townscapes, still life, lovers, clowns, religious subjects and shrouded mourners. The similar themes allow viewers to track Bloch’s evolution as an artist. Cateforis points to two clown paintings Bloch did, one in 1915 and the other in 1955.

“You see the dramatic transformation of his dark and heavy work in the 1910s to the brighter and livelier work in the 1950s,” Cateforis said.

Unlike fellow members of the Blue Rider group, Bloch never capitalized on his association with the Early Modernist movement and left the commercial art world in 1921. The decision allowed him to become a great individualist, Cateforis said.

“He didn’t want to keep hustling to try to sell his paintings, to get shows in galleries, to get reviews and the critics interested in his work,” Cateforis said. “It is that independence from the art market that freed him to pursue his vision.”

The catalog illustrates 20 watercolors and 53 paintings, all in full color, and is available to purchase through the Lawrence Arts Center.