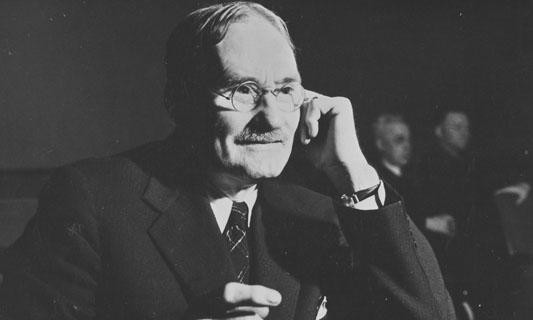 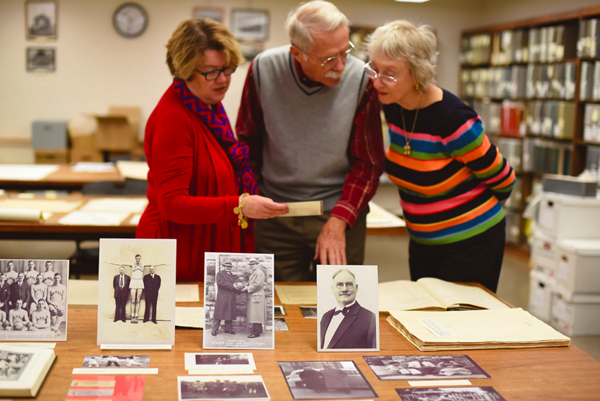 LAWRENCE — A University of Kansas researcher has uncovered what is believed to be the only known audio recording of Dr. James Naismith, inventor of the game of basketball. The recording is located in the archives of the Library of Congress, and the university has received permission to include the recording in KU's archives at the Kenneth Spencer Research Library and to make it available to the public via a website link.

Michael Zogry, associate professor in the Department of Religious Studies, found references to a brief radio interview with Naismith while researching his book in progress, "Religion and Basketball: Naismith's Game." The interview of Naismith was on the radio program "We the People," hosted by Gabriel Heatter in New York, on Jan. 31, 1939. In the roughly three-minute clip, Naismith discusses setting up the first basketball game with two peach baskets in a gymnasium at the International YMCA Training School (now Springfield College) in Springfield, Massachusetts, in December 1891.

Naismith's description of the roughhousing among 18 players in the first game sheds new light on the creative process that led him to draft the 13 original rules of the game, said Zogry and Naismith's grandson, Jim Naismith, who first heard his grandfather's voice once Zogry obtained the audio in November. 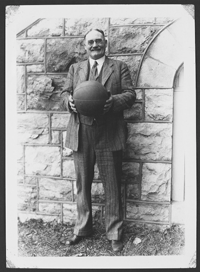 "The recording suggests the gym was a laboratory for developing the game and establishing the rules," Zogry said. "There's also value in just hearing his voice. In this day and age of media saturation, to find something like this is surprising.  No one's heard his voice in over 75 years. When we hear him talking, we get a sense of his demeanor and his self-effacing attitude."

After inventing the game, Naismith went on to earn a medical degree.  He was hired by the University of Kansas in 1898 to serve as chapel director, director of physical education and university physician.  He went on to serve KU for nearly 40 years as a professor of physical education, chairing that department until 1924.  He also served as KU's first athletic director and was the first basketball coach from 1899 to 1907. Naismith died in November 1939 in Lawrence and is buried at Memorial Park Cemetery in Lawrence.

Once Zogry, who also directs KU's Indigenous Studies Program, established the date the interview aired, he began searching for an existing copy of the interview.  The process to locate, access, then gain necessary usage permissions for and a copy of the audio recording took several months.  Zogry's graduate research assistant Katie Hobson, a KU student completing her master’s degree in religious studies, aided in the search.  They received the audio file in November. 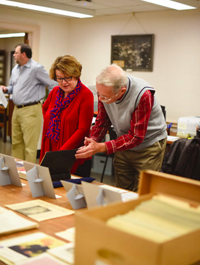 Zogry gained permission from Aerojet Rocketdyne Holdings Inc., a subsidiary of which RKO General Inc. donated the audio and manuscript archives of radio station WOR-AM to the Library of Congress, to utilize the audio clip for his research, to provide copies to Naismith family members and to deposit a copy of the audio recording in KU's University Archives.

University Archivist Rebecca Schulte said KU Libraries have a significant amount of materials on Naismith's life and time as a KU faculty member, especially as part of a traveling exhibit to celebrate the 150th anniversary in Naismith's birthday in 2011. However, the university only had a silent basketball training video of Naismith with his onetime pupil and legendary KU basketball coach Forrest "Phog" Allen.

"It was amazing hearing his voice because we've done research for years, and we still get requests from people all over the world asking for information about Dr. Naismith," Schulte said. "To have it here in the University Archives will truly add in a major way to our holdings on Dr. Naismith."

Schulte said KU Libraries staff have made an audio clip available as part of a special Naismith online collection.

Zogry said in addition to the training video a few other silent film clips of Naismith exist, including one of him in Berlin in 1936, where he traveled to observe basketball's debut as an Olympic sport.

In the audio recording, Heatter introduces Naismith as "the man who made it all possible" before Naismith begins describing how he set up the game in the International YMCA Training School gymnasium to try to curb roughhousing of students in one of his classes during the winter time. He instructed them to use an old soccer ball and try to throw it into the other team's peach basket hung on the wall.

However, the game itself turned somewhat violent, as Naismith confesses he didn't restrict players from running with the ball. Two young men suffered black eyes while another was knocked out, and he had to pull players apart, he said.

"I didn't have enough (rules), and that's where I made my big mistake," Naismith said.

Presumably Naismith then drafted the complete 13 original rules of the game, including no running with the ball (rule No. 3), and within 10 years it had become a popular sport nationally.

"That changes just about everything that's been written about that first game," Jim Naismith said. "When he turned those 18 guys loose, obviously they were having a good time, but obviously this was kind of try number one. He commented and said he didn't write enough rules. It came out of that experience. That makes a lot of sense."

KU is currently constructing the DeBruce Center adjacent to Allen Fieldhouse that will permanently house Naismith's original "Rules of Basket Ball" document. David and Suzanne Booth purchased the rules in 2010 as part of an auction. David Booth grew up in Lawrence and earned a bachelor's degree in economics and a master's degree in business from KU.

Zogry said Naismith's description of the game suggests he used a trial-and-error approach to develop the game. At the end of the segment Naismith quips that inventing the game, "shows what you can do when you have to," which indicates his humility in the face of creating a very popular game that even during his lifetime was already a worldwide phenomenon.

"That's one of the things people don't really recognize as being so significant about him. You cannot point to the creators of most games," Zogry said. "It’s difficult to calculate his influence on humanity, and by saying this I'm not trying to lessen any other contribution. But it's just incredible if you really sit back and think about the sheer number of people who have played basketball since its invention in 1891, not to mention the countless others who have attended, watched or read about games. Basketball is truly a global phenomenon, and even during his lifetime, as he recalled in his autobiography, he was amazed during his travels to see basketball goals in virtually every place he visited.”

Zogry’s book examines the influence of religion on Naismith's life, including the creation of basketball as well as on the commemoration of his legacy. Naismith was an incorporating member of the Kansas School of Religion, founded by members of KU's Council of Religious Workers, whose goal was to help students at a state university take classes on the subject of religion that would count toward their degrees. The courses were held in Myers Hall, which is now the site of Smith Hall.  Over time the School of Religion was officially incorporated into KU as the academic Department of Religious Studies.

"Naismith’s goals in life, as he stated on his application to the International YMCA Training School, were to try to help 'win men for the Master,' to build character and to be an example for the men," Zogry said. "He was always doing that. His approach was to put Christianity out there in front of people and try to influence them through positive character development, but he reserved his formal preaching for when he was a guest minister at area churches"

"It does have an impact on people.  You can discover items thought to be ‘lost’ to history and uncover useful information about people and events due to  people having the foresight to save these materials in locations such as the Library of Congress.”

Naismith was a person who valued his ideals and beliefs more than personal financial gain, Zogry said. He had a modest basketball endorsement deal with Rawlings near the end of his life, but he famously refused to patent or otherwise profit from the game, including rejecting an extremely lucrative endorsement deal from a major cigarette company at a time when it was common for star athletes and coaches to endorse cigarettes.  As a doctor, the negative health effects of smoking were clear to him.

He also gave back to his adopted country as an immigrant who volunteered to serve as a military chaplain in the Kansas National Guard in 1915, then served during World War I in France as a member of the YMCA War Work Council. He also was a mentor to many students, including a young African-American student named John McLendon, who would go on to become a groundbreaking basketball coach and member of the Naismith Memorial Basketball Hall of Fame.

"Naismith’s story is a great American success story," Zogry said, "and I’m proud to have found this piece of his legacy and make it public.”