LAWRENCE — The world has long neglected to look at issues surrounding global climate change through a gendered lens, a University of Kansas professor argues in her new book. 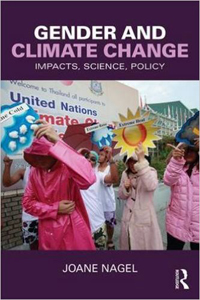 "In all areas of climate change science, policy and solutions, women and men should be equally represented at the table," said Joane Nagel, university distinguished professor of sociology and author of "Gender and Climate Change: Impacts, Science and Policy."

Nagel said her research for the book points to how more women than men die in climate-related disasters around the world and how a male-centric approach to climate change policy too often focuses on treating the symptoms rather than addressing the root causes.

"For instance, geoengineering approaches focus on ways to reduce sunlight or bury and sequester carbon. These kinds of solutions ignore the causes of climate change, which is carbon dioxide production. We need to address the sources of climate change as well as its consequences," Nagel said.

Strategies that emphasize quick fixes that allow continued high carbon production tend to come from the types of professions that are imbalanced along gender lines, such as mostly men working in energy or transportation industries, she said.

"Women have responsibilities at home that make them sensitive to questions of health and well-being. They're likely to think about inequality and climate justice issues: How will people be affected? How will climate change affect health? How will climate change affect living circumstances of people? When they're responsible for children, women ask, how will it affect future generations?" Nagel said. "Men might care about that, too, but women are on the front lines as environmental consumers and caregivers."

The case studies in her book chronicle gender differences in climate change effects and describe some of the ways masculinity has played out in various institutions linked to climate change. She gives examples ranging from the types of professions men and women typically enter to the militarized labs from the Cold War era that have transitioned to measuring climate conditions.

Nagel said her research makes the case for more gender parity in all areas that address climate change, such as science, policy and solutions. Recommendations include more equal research funding of male and female climate scientists because they are likely to have different perspectives on critical research questions, and gender parity in scientific regulatory and global governance bodies, including at the United Nations Climate Change Conference of the Parties meetings.

"When you have not only gender diversity, but also racial and ethnic diversity, and you have a problem, you get quicker, better solutions," Nagel said. "And when you have organizations with women in leadership, you tend to get a culture that is more inclusive and more egalitarian. Part of that has to do with women being excluded from leadership positions for so long."

She points to successes in Norway, which instituted mandated gender parity on corporate boards of publicly owned corporations.

Nagel said if not addressed, the fallout from climate change could hit women especially hard, particularly in poorer nations. For example, in the 1991 cyclone that struck Bangladesh and killed roughly 138,000 people, researchers have found that roughly 90 percent of the dead were women and children.

Nagel said in countries with little to no gender parity, especially poorer ones, women can be more vulnerable to disasters, because they are often sequestered at home, have less access to education and paid labor, and in the case of Bangladesh, most women didn’t even know how to swim.

"Researchers have found that women were much more likely to be killed or seriously injured in disasters for a variety or reasons," Nagel said. "This really emphasizes the importance of understanding what is going on with gender and climate change."

KU in the news
The Washington Post — Mon, 02/03/2020
Vladimir Putin follows a long Russian tradition of enlightened autocrats
National Public Radio — Sun, 02/02/2020
Making Super Bowl guacamole? Be careful to avoid the pits of an avocado hand injury
A @KUHistoryDept professor documented his quest to consume as much funazushi as possible. 🍣🥢 #KUdiscoveries https://t.co/qbez25f8Pa
«»
Follow us on Twitter »