LAWRENCE — In his career, David Ekerdt has often heard in conversations that people associate gerontology with end-of-life issues.

"People understand aging to be failing bodies," said Ekerdt, University of Kansas professor of sociology. "Gerontology is interested in older people, but it's also a framework that's interested in the entire sweep of life."

As an approach to teaching aging as a lifelong process and to economize the different disciplines it draws from, Ekerdt has drafted a strategy around five focal points of gerontology. He outlines them in his article "Gerontology in Five Images," set for the April issue of the journal The Gerontologist, published by the Gerontological Society of America.

"Aging is a lifelong process. It has an uncertain course, but we're able to intervene in thousands of different ways in order to assist people for living long, full lives," said Ekerdt, who directs the university's Gerontology Center with the KU Life Span Institute.

Here are his top five images on teaching gerontology: 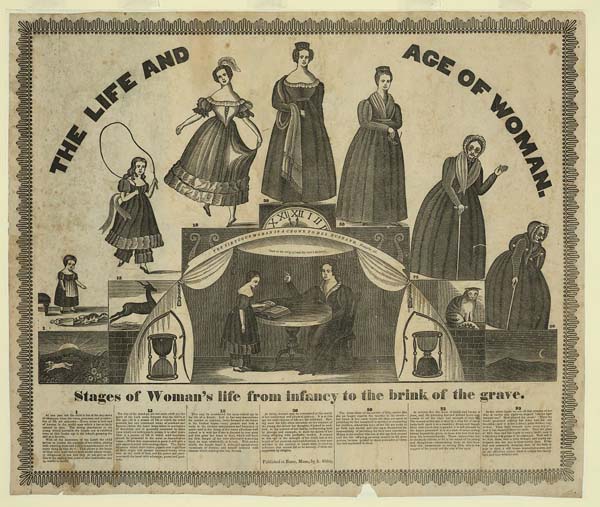 "From the vantage point of 1835, this is such a clear picture of what the course of life ought to be. Life is charged and energetic in the beginning, it reaches a peak of strength and maturity, and then there is decline. Such depictions have been common for hundreds of years," Ekerdt said. "Strip away the details, and people still have this arc in their mind. They still have this assumption that life goes this way. The problem is if we think about human potential and if we start to believe it ourselves, then we're going to sell ourselves short as life progresses."

"As we go forward in life, we derive less fitness from our physical potential. However, as this happens, culture can and does compensate. All of the ingenuity and the technology and everything we can devise to assist in life comes into play and becomes more and more important. You can think about eyeglasses and modern dentistry and how beneficial both are; think about health insurance and family caregiving," Ekerdt said. "The lesson of the third panel is that in later life, some of this cultural assistance becomes less effective. For example, suburban housing is good for families with children but likely not to be as supportive for older people who can't drive and can't walk up and down stairs." 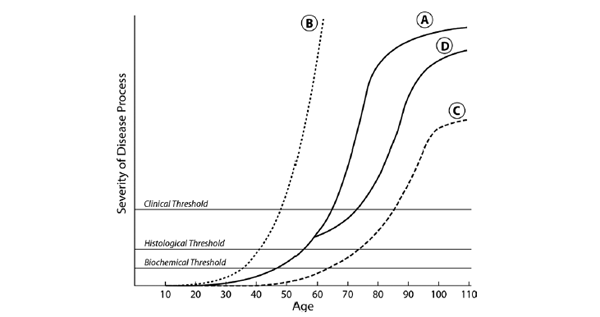 "This describes the course and appearance of an illness. Path A is the normal course. Path B is an accelerated course. C and D are the delays of the onset of a disease," he said. "What are the circumstances that would accelerate the appearance of, say, joint troubles or heart disease or depression? What could slow their development? These questions invite research and interventions from many fields. At the same time, there’s a danger here of buying into this depiction because you begin to imagine that everybody is harboring health troubles, and this raises anxiety about aging." 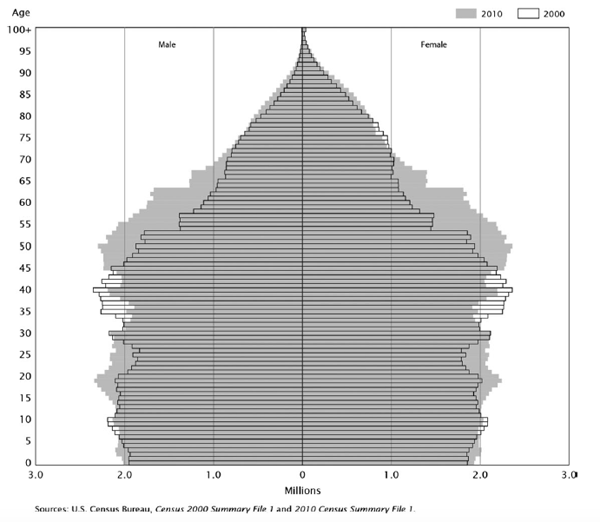 "This is a population pyramid, a picture of the distributions of Americans of different ages in 2000 and 2010. One can generate such pyramids for every place in the world. They help us visualize the various roles that are assigned to people across the stages of life and also how society is always changing in its composition," Ekerdt said. "A constant flow of new cohorts brings new historical experiences to adulthood and in this way creates social change." 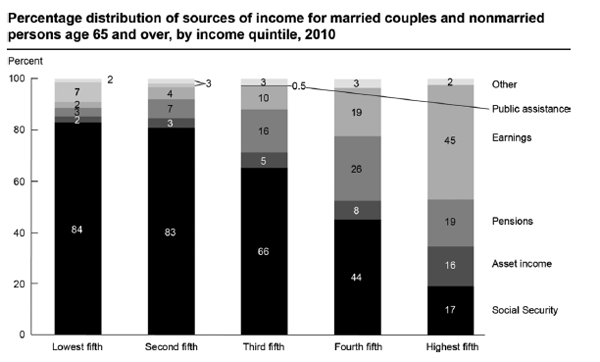 "This bar graph helps teach the economics and politics of aging. With the older population divided into fifths by income, it shows the importance of Social Security benefits for the income of older people, particularly those who are less well off," Ekerdt said. "This is an opportunity to discover how Social Security and Medicare work and also to ask: Why don’t people, especially women, have more savings and pension income? What policies could create more income security for later life?  And is this a public or a private responsibility?"