LAWRENCE — Across the nation and beyond, many college students get their first exposure to art history because of University of Kansas scholar Marilyn Stokstad. She died at the age of 87. 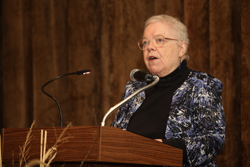 Stokstad, the Judith Harris Murphy Distinguished Professor Emerita of Art History, is being remembered in the KU and art history communities as an influential scholar in the field. She wrote art history textbooks used widely by universities, including multiple volumes and editions of “Art History” and “Art: A Brief History,” as well as “Medieval Art.” As a result, her voice shapes much of how the discipline is first taught to young scholars.

“Professor Stokstad’s life and distinguished career as a teacher, scholar and author elevated the stature of our university in numerous ways,” said Chancellor Bernadette Gray-Little. “Students from around the world learned art history from her authoritative textbooks. By sharing her love of art, she made our community a more vibrant place for all of us. On behalf of the entire KU community, I offer our deepest condolences to her family and friends. She will be greatly missed.”

Born in Lansing, Michigan, in 1929, Stokstad graduated from Carleton College in 1950 before spending a year at the University of Oslo, Norway, as a Fulbright Fellow. She earned a master’s degree from Michigan State University in 1953 and a doctorate from the University of Michigan in 1957.

“She was committed to public education. She was a product of it at the graduate level,” said Charles Eldredge, Hall Distinguished Professor of American Art and Culture. “She went out and visited the world, but her heart was in the Midwest. This is where the work was done.”

Stokstad joined the KU faculty in 1958, served as associate dean of the KU College of Liberal Arts & Sciences from 1972 to 1976, and taught more than 20 different courses — ranging from introductory art to graduate seminars — before retiring in 2002.

“Marilyn Stokstad leaves legions of scholars and friends who have been influenced and inspired by her life as an art historian, museum director and dynamic professor,” said Saralyn Reece Hardy, the Marilyn Stokstad Director of the Spencer Museum of Art. “We have lost a dear friend and distinguished colleague. Marilyn was a powerful woman with legendary commitment to art and education.”

From 1961 to 1968 Stokstad directed what was then known as the KU Museum of Art, now named the Spencer Museum of Art. In December 2012, she made a lead gift creating the Marilyn Stokstad Directorship at the museum as part of KU’s Far Above campaign.

As a generous donor to KU, Stokstad’s other gifts included renovation of a reading room in the Kenneth Spencer Research Library and support for the Hall Center for the Humanities, the College of Liberal Arts & Sciences, the Lied Center of Kansas and other causes. In lieu of flowers, the family suggests gifts to the Spencer Museum of Art or the Spencer Research Library.

Stokstad served as president of the College Art Association and the International Center of Medieval Art. Her many awards and professional honors include a lifetime achievement award from the National Women’s Caucus for Art, Kansas Arts Commission Governor’s Arts Award as the Kansas Art Educator of the Year, Chancellors Club Career Teaching Award and an honorary degree of doctor of humane letters by Carleton College.

A celebration of life for Stokstad is planned for the fall.