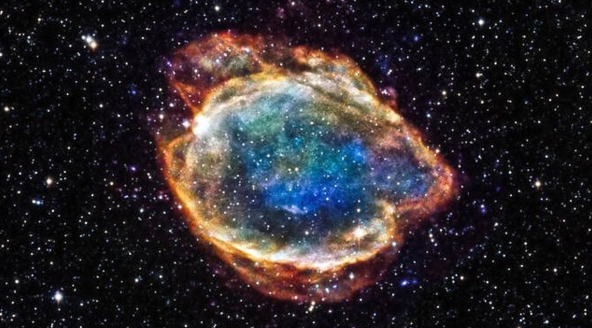 LAWRENCE — Two new papers appearing in the journal Nature this week are “slam-dunk” evidence that energies from supernovae have buffeted our planet, according to astrophysicist Adrian Melott of the University of Kansas.

Melott offers his judgment of these studies in an associated letter, titled “Supernovae in the neighborhood,” also appearing this week in Nature.

One paper, authored by Anton Wallner and colleagues, proves the existence of ancient seabed deposits of iron-60 isotopes, tracing their source to supernovae occurring about 325 light years from Earth. The second paper, by a team headed by Dieter Breitschwerdt, estimates explosion times of these supernovae, isolating two events: one 1.7 to 3.2 million years ago, and the other 6.5 to 8.7 million years ago.

“This research essentially proves that certain events happened in the not-too-distant past,” said Melott, a professor of physics and astronomy. “They make it clear approximately when they happened and how far away they were. Knowing that, we can consider what the effect may have been with definite numbers. Then we can look for events in the history of the Earth that might be connected to them.”

Melott said both supernovae events were beyond the “kill zone” of roughly 30 light years, but they might have had other effects — including influence on human evolution.

“Our local research group is working on figuring out what the effects were likely to have been,” he said. “We really don’t know. The events weren’t close enough to cause a big mass extinction or severe effects, but not so far away that we can ignore them either. We’re trying to decide if we should expect to have seen any effects on the ground on the Earth.”

A major colloquium, titled “When Stars Attack! Near-Earth Supernovae Explosions Threat and Evidence,” is intended to further discussion of the new evidence. A free public lecture by astrophysicist Brian Fields of the University of Illinois will take place at 7:30 p.m. April 18 at Woodruff Auditorium in the Kansas Union.

“In the 1990s he did the calculations and carried it forward,” said Melott. “He said, ‘Hey, look for iron-60. This is a way to find out if there have been supernova near the Earth.’ Five years later came the first indications of supernovae using iron-60. Now, 20 years later, we’ve got a slam-dunk. So Fields is the one that really got all this going, and it’s just a really nice coincidence that’s he’s coming to KU just as these papers are coming out.”