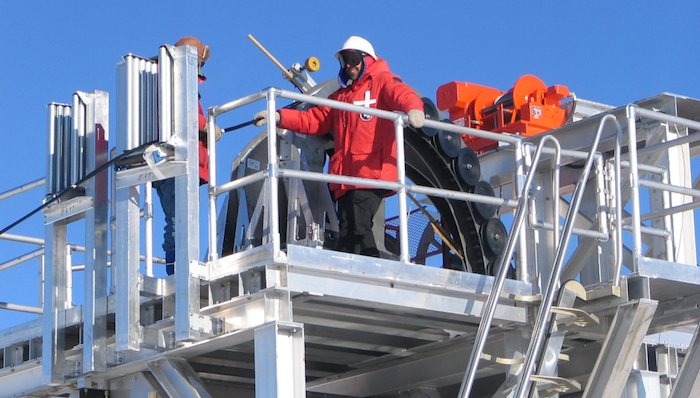 LAWRENCE — In the second it takes to read these words, 65 billion neutrinos will shoot through every square centimeter of your body. Luckily, these infinitesimal particles don’t do any harm — they pass through us, as they do with most everything, without stopping or interacting. 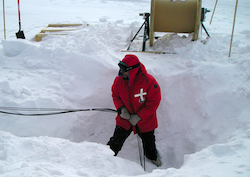 “Partly because it’s so tiny, a neutrino has this unique property — it’s able to penetrate through matter very easily,” said David Besson, professor of physics and astronomy at the University of Kansas. “A neutrino produced in the center of the Sun can typically require a light year's worth of solid lead to stop that neutrino, whereas light, in the form of photons from the Sun, you can block out easily with dark sunglasses.”

According to Besson, the ability of neutrinos to pierce through anything and keep on moving makes them ideal cosmic messengers.

“The fact that neutrinos are so penetrating makes them interesting to astrophysicists,” he said. “Huge and cataclysmic stellar explosions that we’d like to understand produce lots of particles, but most of them will be absorbed by material in the interstellar medium before getting to our observatories. But neutrinos, because they’re so penetrating, can carry info from much farther away — much more than a photon, for example.”

Yet, neutrinos are tricky to detect precisely because they don’t interact with matter.

Today, Besson is part of a multinational research effort at the South Pole to build and operate the Askaryan Radio Array, a large-scale radio-detection instrument that will identify radio waves cast off from high-energy neutrinos far underneath the Antarctic ice shelf. Eventually the array will be composed of 37 antennae stations that effectively will transform hundreds of cubic kilometers into a colossal neutrino detector.

The ARA team recently published a performance review of the first two stations to come online in the peer-reviewed publication Physical Review D. Their findings showed great potential for the detector to push forward understanding of the cosmos once it’s fully operational.

“The first two stations are showing a lot of promise of detecting neutrinos,” Besson said. “Radio transparency within the ice is very high. We measured at this at the South Pole and were able to send radio waves through about 4 miles’ worth of ice. So that’s pretty transparent, and it means you can bury an antenna in the Antarctic ice and scan for several kilometers around for potential neutrino interactions.”

Besson performs data analysis and serves as a spokesman for the ARA group. He said once the array is fully operational, it could produce information from neutrinos that would shed light on the state of the current universe and also the universe’s origins.

“Neutrinos tell us something about cataclysmic explosions that happen today or within the recent history of the universe,” he said. “But also, because they can reach us from very farthest periphery of the distant universe, they carry an imprint of processes that occurred in early universe. If you can accumulate enough data from them, you can test theories of evolution of the cosmos.”

While scientists are learning secrets of the universe, KU undergraduate and graduate students will have the opportunity to learn about neutrinos and neutrino detection via the array. Moreover, two of the graduate students will travel to Antarctica to engage in research this October. Their route will take them from Lawrence to Kansas City, Los Angeles, New Zealand, McMurdo Station in Antarctica, and finally to the South Pole aboard a C-130 military jet.

Further, Besson is working with high school students at KU this summer, including soon-to-be Jayhawks.

“Two of them are coming here as undergrads in the fall,” he said. “The nice thing about radio waves, unlike gamma rays or x-rays, is they’re familiar to people, and the equipment you need to send and receive radio waves are just antennas, and it doesn’t take much work to get to point where you can design and build and test your own antennae.”