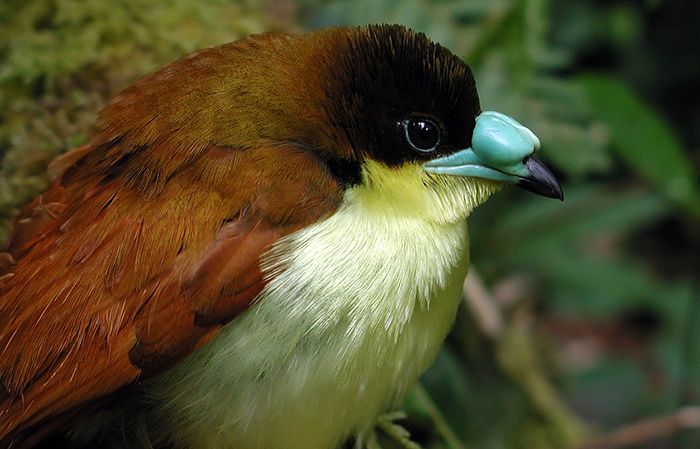 LAWRENCE — While it is widely accepted that songbirds originated from the Australian continent, how and when they diversified and colonized the rest of the globe has remained a mystery.

Researchers from the University of Kansas, Louisiana State University and three other institutions reconstructed the evolutionary history of songbirds using thousands of DNA sequences from majority songbird lineages and information from the fossil record to provide answers to these questions. They found that songbirds began diversifying about 33 million years ago and underwent extensive diversification in Australia. Furthermore, the researchers also found that songbirds first dispersed out of Australia about 23 million years ago through early islands in the Indonesian archipelago into Asia and subsequently the entire globe.

This new research will be published in Nature Communications on Aug. 30.

“One of the challenges with deciphering songbird evolutionary history is that they diversified so rapidly that previous studies had a difficult time estimating the branching pattern of the songbird family tree,” said lead author Rob Moyle, KU professor of ecology and evolutionary biology and curator of ornithology at the KU Biodiversity Institute. “With advances in DNA sequencing technology, we were able to collect an unprecedented amount of DNA sequence data that helped clarify songbird relationships.”

Songbirds comprise the largest group of birds, with about 5,000 species, accounting for nearly half of avian diversity. They are found on almost all corners of the globe, with the exception of Antarctica, and include the familiar crows and sparrows, as well as elaborate singers like mockingbirds and lyrebirds.

With a better understanding of the songbird family tree, Moyle and his colleagues were able to infer the colonization history undertaken by songbird ancestors.

The dispersal of songbirds from Australia through Indonesia, Moyle said, seems like an obvious explanation to anyone who knows world geography; but one has to bear in mind that tens of millions of years ago, world geography looked a lot different because of the Earth’s constant process of plate tectonic movements.

“Thirty-three million years ago, Australia was thousands of kilometers away from any continent, and New Guinea barely existed,” Moyle said.

Another issue confounding our understanding of songbird evolution is the estimated age of the group, said co-lead author Carl Oliveros, a postdoctoral researcher at Louisiana State University.

“Our estimate for the age of songbirds is about half of most previous estimates, placing songbird evolution in a very different geological landscape than previously thought,” said Oliveros, who earned his doctorate in ecology and evolutionary biology at KU.

“Thus the previous hypothesis of long-distance dispersal by songbirds from Australia to Africa via Indian Ocean landmasses are put into question because these Indian Ocean islands were submerged by the time we think songbirds diversified.”

Oliveros’ and his colleagues’ work also provides an alternative explanation to the high diversity of songbirds that are presently found only in New Guinea. Previous research suggested that songbirds diversified extensively in proto-islands of New Guinea before colonizing adjacent areas.

However, Oliveros and his colleagues believe that songbirds underwent extensive diversification in Australia and subsequently colonized New Guinea after the formation of the New Guinea landmass. They suggest that the aridification of Australia caused the extinction of forest-adapted songbird lineages in the continent, which left relicts of the first colonizers as sole surviving lineages in New Guinea. According to the researchers, this idea is supported by the presence of fossils in Australia of plants and mammals that are currently only found in New Guinea.

The study used tissue samples of birds deposited at the KU Biodiversity Institute collected from expeditions to 25 countries within the past 25 years. This research is supported by funds from the National Science Foundation, KU and Louisiana State.

Photo: This yellow-breasted satinbird (Loboparadisea sericea) is among the songbirds research shows first dispersed out of Australia about 23 million years ago through early islands in the Indonesian archipelago into Asia and subsequently the entire globe. Image credit: Brett Benz, American Museum of Natural History