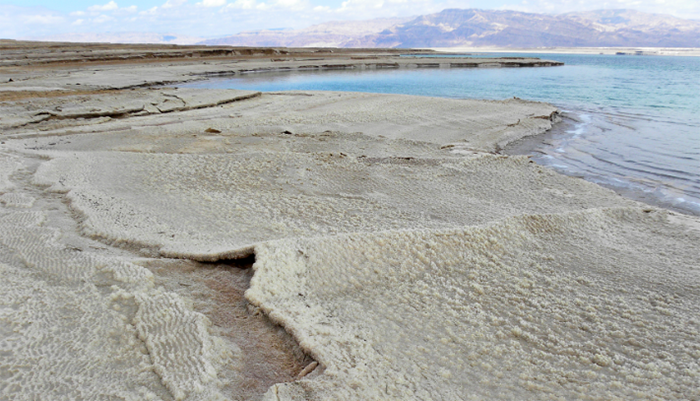 LAWRENCE — Through use of new technology, researchers have unveiled a reading of a charred ancient scroll that previously could not be opened or read without damaging it. The scroll was discovered at En Gedi, a site on the western shore of the Dead Sea.

This technology could play major dividends in reading ancient texts, according to a University of Kansas researcher of scriptural interpretation in the Hebrew Bible and in early Judaism.

Molly Zahn, associate professor of religious studies, has published scholarship on the development and scribal transmission of early Jewish scriptural texts, particularly focusing on how early interpreters updated and revised those texts.

Q: What do you consider to be the most important thing researchers have found so far in examining the En Gedi scroll with this technology?

Zahn: Although the contents of the scroll are interesting, the technology is the really cool thing. This was a burnt lump, basically a stick of charcoal, that would have been impossible to unroll physically, yet we were able to recover text from it.

Many of the Dead Sea Scrolls, which are a little older than the En Gedi scroll, were heavily damaged, though not as badly as this scroll. Some of them could only be read after painstaking work to unroll them. Despite the care taken in the unrolling, some damage was inevitable, and once scrolls are unrolled they must be very carefully protected to prevent further deterioration. If this technology had existed when the Dead Sea Scrolls were first found, we might have been able to recover a lot more text from some scrolls.

Q: As far as the text of the first two chapters of Leviticus, does anything they’ve found (or could it potentially) change anything with how that text is viewed and interpreted in Judaism and Christianity?

Zahn: The text of Leviticus in this scroll is exactly the same as the text found in traditional versions of the Hebrew Bible (except for vowel markings and other annotations, which are absent from early manuscripts like the En Gedi scroll).

So in that sense, it doesn’t really change what we know about the text of Leviticus. In fact, it fits very well with the evidence of other biblical manuscripts found among the Dead Sea Scrolls and at other sites in the Judean desert. These manuscripts show a lot of variation up until the end of the 1st century CE, but after that the diversity dies out and we have one main text form that is transmitted very precisely over the centuries.

On the other hand, depending on how the En Gedi scroll is dated, it comes from a period (2nd-4th centuries CE) where we have very little evidence at all for what the biblical text looked like, so it is an important witness in that respect.

Q: What is the potential significance of being able to use this type of technique to read other ancient scrolls and texts?

Zahn: It opens up whole new avenues for learning about texts without having to physically manipulate them, so now we can read scrolls that cannot be unrolled or that would be damaged too much by the unrolling process. I can imagine it could be applied in a variety of situations where texts have, for whatever reason, become physically inaccessible. This technology will really expand the tool kit available to scholars who deal with ancient manuscripts.

To arrange an interview with Zahn, contact George Diepenbrock at 785-864-8853 or gdiepenbrock@ku.edu.