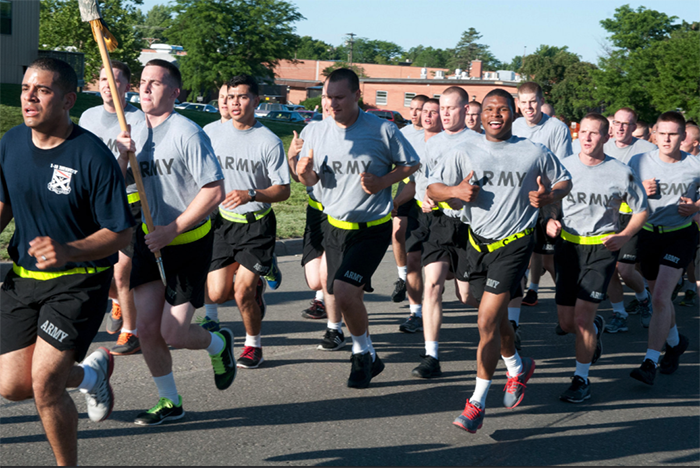 “Soldiers get blown on their butt from an improvised explosive device (IED). Often they lose consciousness for 30 seconds to six minutes — but there’s no penetrating injury,” said David K. Johnson, associate professor of clinical psychology at the University of Kansas. “The military has great body armor now that keeps them from dying in these blasts, but the head and brain are still injured. Soldiers who otherwise would’ve died in previous wars now suffer head injuries. IEDs are cheap, easy to make and effective. This is why they are the signature weapon of terrorist organizations.”

Johnson is the principal investigator of a team of researchers on a two-year, $500,000 clinical trial to improve soldiers’ quality of life supported by the Department of Defense to assess intensive cardiorespiratory exercise as a way to help wounded warriors recover from mild traumatic brain injury, or mTBI.

“By far, mTBI is the most common brain injury,” Johnson said. “There’s a lot of soldiers with pretty significant problems. It’s not just the initial injury that causes so much damage but also the biochemical reaction that unfolds over time afterward. You develop migraines, blurry vision, motor problems. Parts of the brain can die, and it takes a long time to recover — weeks, months, sometimes never.”

On a visit to Irwin Army Community Hospital at Fort Riley, home of the U.S. Army’s 1st Infantry Division, the KU researcher found soldiers recently deployed to the Middle East might not realize they’ve experienced mTBI.

“I asked maybe 30 guys hanging out in a barracks common room, ‘Have any of you ever gotten a head injury?’,” he said. “And they answered, ‘No, none of us. There’s a guy in the other brigade that maybe did.’ Basically, they were saying there was one soldier of over 20,000 at Fort Riley with a TBI.”

But accompanying Johnson was retired Lt. Colonel Randy Masten, assistant director of the Graduate Military Program at KU, who told him, “You asked it the wrong way.”

Masten queried the same group, “How many of you have been blown up?”

That’s when more than half of the soldiers in the room raised their hands.

“This means they’d been near an explosion that had knocked them off their feet and they became disoriented or lost consciousness,” Johnson said. “This moment was eye opening. It really helped  me realize the prevalence of mild traumatic brain injury in our war fighters.”

Johnson’s research focuses on Alzheimer’s disease (AD), the form of dementia that erodes thinking skills and memory, and affects as many as 5 million Americans. He directs the Neuropsychology and Aging Laboratory and serves as the director of neuropsychological assessment at the KU Alzheimer’s Disease Center.

He said mTBI and Alzheimer’s disease share common symptoms —  memory and thinking problems but also depression and anxiety. What’s more, mTBI triggers a buildup of amyloid plaque and tau tangles in neuronal cell bodies and injured axons, which happen to be the hallmark brain lesions of Alzheimer’s disease.

“An awful lot of the biochemical process in mTBI appears to be related to Alzheimer’s disease,” Johnson said. “There’s basically no drug therapy for mTBI. But we know aerobic exercise can reduce the amount of biochemicals associated with Alzheimer’s disease, reduce the plaques and tangles, so we think it will work with mTBI as well. Aerobic exercise helps the brain heal itself. In fact, the KU ADC was one of the first research centers in the country to demonstrate improved cardiorespiratory fitness also improves cognition in older adults and improves functional capacity in people who already have Alzheimer’s symptoms.”

Boosting the cardiorespiratory fitness of active duty service members at the “Big Red One” will be different than increasing fitness for older adults. Seniors tend to be sedentary while these soldiers already are physically fit. Johnson said his research focuses on testing the effectiveness of a fitness routine dubbed “ICE.”

“ICE is a more intensive workout regimen,” he said. “Instead of lifting weights, we want the soldiers running more to improve their aerobic capacity. They’ll do rowing machines and bikes to relieve boredom — but ultimately they’ll become runners. We’re trying to get them to run more miles more quickly.”

To assess the benefits of the ICE exercise program, more than 100 volunteers at Fort Riley will go through cognitive and physical fitness testing before and after ICE.

Along with Masten, Johnson’s partners in the research include Col. John Melton, commander of the Irwin Army Community Hospital at Fort Riley, Dr. Jeffrey Burns, who co-directs the KU Alzheimer’s Disease Center, and retired Col. Mike Denning, director of the Office of Graduate Military Programs.

“What’s good for Alzheimer’s disease in older adults we hope is good for this mTBI,” Johnson said. “Because mTBI shares so much biologically with early Alzheimer’s disease, I hope that what is working in our older adults also works in these young men and women. It’s an incredible privilege to work with these soldiers, and I’m excited by the chance of improving their lives in any way, shape or form I can.”