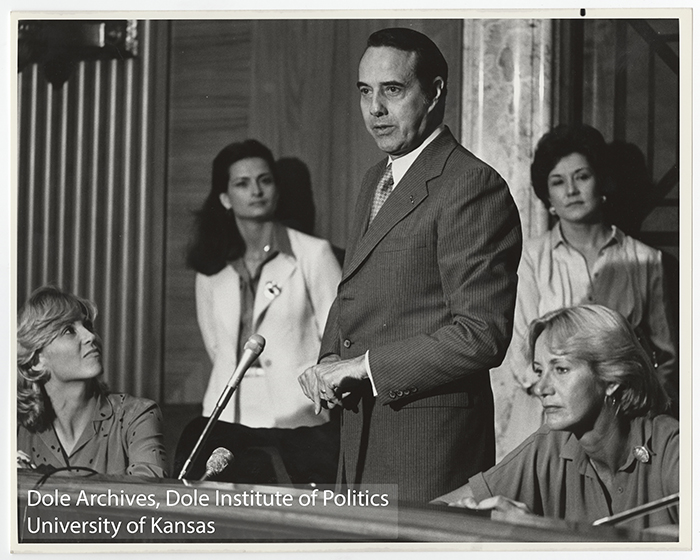 LAWRENCE – On May 1, 1970, Sybil Stockdale, Phyllis Galanti, Louise Mulligan and Jane Denton, founding members of the National League of Families of American Prisoners and Missing in Southeast Asia, rallied with 1,000 family members of prisoners of war at the DAR Constitution Hall in Washington, D.C. U.S. Sen. Bob Dole, an early and ardent supporter of their cause, helped draw a crowd of 3,800 to the event that helped establish the league’s influence and national visibility. 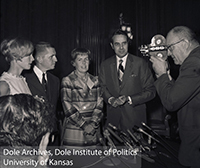 The Dole Institute of Politics has announced the creation of a new special exhibition about these leaders, opening in May 2017. “The League of Wives: Vietnam’s POW/MIA Allies & Advocates” will tell the story of the military wives who founded the organization, which would later become the National League of POW/MIA Families. The exhibition – the first of its kind at the institute – will feature documents, artifacts, oral histories, multimedia and regionally specific components.

The project will be funded by a $50,000 gift from Harlan and Alice Ann Ochs of Colorado Springs, Colorado. The gift honors Harlan Ochs’ late brother Larry Ochs, former mayor of Colorado Springs and a strong advocate for the POW/MIA cause.

Virginia-based historian and 2017 Dole Archives Curatorial Fellow Heath Hardage Lee will curate the exhibition, which is based on her upcoming book, “The Reluctant Sorority: The True Story of Survival and Rescue from the Homefront,” due for release in 2018. 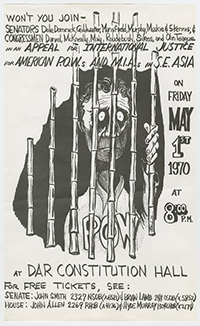 “The wives’ weapons were organization, tenacity and their willingness to ditch the very military protocols they were trained to adhere to,” Lee said. “Ultimately, these Vietnam War wives quit waiting for their husbands to be rescued by the American government. Instead, they did the job themselves with aid from Senator Dole, Secretary of Defense Melvin Laird and his staff, National Security Advisor Henry Kissinger and President Richard Nixon.”

“Ms. Lee’s 2015 visit revealed to us a remarkable story of women’s leadership during the Vietnam War and a little-remembered part of Senator Dole’s legacy,” said Audrey Coleman, Dole Institute assistant director and senior archivist. “It also resonates today as a prime example of a grass-roots effort becoming a partnership of citizens and their government officials. This transformative partnership changed U.S. government protocol regarding prisoners of war and missing in action – and ultimately, the fate of their husbands.”

“This important national story is extremely relevant to our community, which has a long history of military service and sacrifice,” said Leah Witherow, curator of history at the Pioneers Museum. “Colorado Springs Vice Mayor — and later Mayor — Larry Ochs worked closely with Helene Knapp, a local and national leader in the National League of Families of American Prisoners and Missing in Southeast Asia, to advocate for and support the Vietnam-era POW/MIA families in Colorado Springs. We are tremendously honored to be able to bring this exhibit to the Pikes Peak Region and excited to work with the Dole Institute of Politics to raise awareness of this significant era in American history.”

“The Virginia Historical Society has had a long relationship with Galanti family,” said Andrew Talkov, vice president for programs at the Virginia Historical Society. “It is home to a significant collection of Phyllis’ papers related to her activity in the National League of Families of American Prisoners and Missing in Southeast Asia. We enthusiastically leapt at the opportunity to support the Dole Institute in the creation of this important exhibition and look forward to hosting it in the future.”

The exhibition’s tour schedule beyond 2019 is still in development. The exhibition team includes Kristine Bartley, filmmaker and herself a Vietnam war wife, and Minda Stockdale, assistant curator and granddaughter of National League founder Sybil Stockdale and Adm. Jim Stockdale, as well as staffs of the Dole Institute, Pioneers Museum and Virginia Historical Society. Kansas Audio-Reader Network will provide audio description for both the Dole Institute installation and the traveling exhibition.

The Dole Institute of Politics is dedicated to promoting political and civic participation as well as civil discourse in a bipartisan, philosophically balanced manner. It is located on KU’s West District and houses the Dole Archive and Special Collections. Through its robust public programming, congressional archive and museum, the Dole Institute strives to celebrate public service and the legacy of former U.S. Sen. Bob Dole.

Located in the beautifully restored 1903 former El Paso County Courthouse and accredited by the American Alliance of Museums and winner of local and national awards for excellence, the Colorado Springs Pioneers Museum builds a lasting connection to the Pikes Peak Region by preserving and sharing cultural history. https://www.cspm.org/

The Virginia Historical Society — a privately funded nonprofit organization — collects, preserves and interprets the Commonwealth’s history, linking past with present to inspire future generations. The VHS is located at 428 North Boulevard in Richmond’s Museum District. Hours are Monday-Sunday 10 a.m.-5 p.m. for the galleries and museum shop, Monday-Saturday 10 a.m. – 5 p.m. for the library. For more information about the historical society, call (804) 358-4901, visit vahistorical.org, or connect with the VHS on Facebook and Twitter.