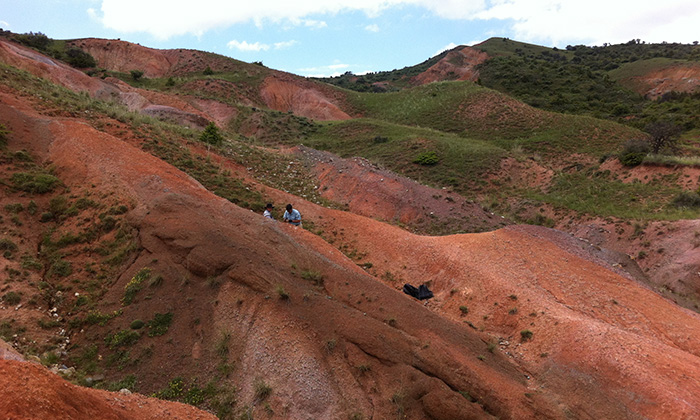 LAWRENCE — A $100,000 grant from the David B. Jones Foundation will help to develop a new generation of paleontologists at the University of Kansas, enabling students to pursue fieldwork in locations such as Wyoming and Turkey aimed at solving some of evolution’s deepest mysteries.

“This money can be used flexibly and broadly to support research training and educational outreach relating mainly to graduate and some undergraduate students at KU in vertebrate paleontology,” said K. Christopher Beard, Distinguished Foundation Professor, Department of Ecology & Evolutionary Biology and senior curator at the KU Biodiversity Institute, who is heading up work under the new grant.

Beard’s research focuses on the early evolution of mammals, including primates. He said the first three David B. Jones Fellows in Vertebrate Paleontology — Matt Jones, Spencer Mattingly and Ryan Ridder — would begin training this spring. 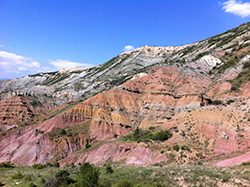 “It’s often hard to get federal funding to support participation by graduate and undergraduate researchers, especially in my kind of research, which is field-based,” Beard said. “Costs can escalate, especially with international fieldwork, airfare and procurements beyond lodging and food — it really can skyrocket. But in paleontology, one of the most important components is to get students access to work in the field.”

The researcher said that student work and training would center on two locations: Wyoming and the nation of Turkey.

In Turkey, Beard’s students will have the opportunity to piece together the ancient migration of mammals in the geographically unique Pontide region, which researchers believe 45 million years ago was an island treasure house of biodiversity, something like today’s Madagascar.

“We’re trying to determine if the Pontide terrain played a role in how animals were able to move back and forth between Asia and Africa, close to the appearance of anthropoid primates,” Beard said. “The more fossils we collected there, the weirder they got. This Pontide island had a unique fauna never found anywhere else but a couple of animals that clearly came from Africa. The most common mammals we’ve found there are primitive hoofed mammals, clearly related to animals common in western Europe, but millions of years earlier — and we’ve got a bat that seems related to Asia.”

In terms of migration of these animals, Beard sees the ancient Pontide region less as a stepping stone between Asia and Africa and more of a “cul-de-sac.”

“Animals were getting to the islands, but not leaving so much — they seemed to get stuck there,” he said.

Before undertaking fieldwork in Turkey, the David B. Jones Fellows will travel to Wyoming to conduct research to establish how mammals during the late Paleocene responded to a warming climate.

“We’re using Wyoming fieldwork as a proving ground to give students experience in somewhat exotic but not crazy-exotic setting before we take them internationally,” Beard said. “In the southwestern part of the state, we’re establishing a record of how mammals evolved in response to climatic change in the Paleocene, right after the dinosaurs have died and mammals are beginning to evolve rapidly, and comparing that to other findings from the Bighorn Basin.”

Beard said his students would be surveying for fossils, excavating sites and screen-washing sediment for minuscule fossils, as well as partnering with geologists to learn to read the landscape.

“They’ll pick up how to interpret sedimentary rocks, to understand what the ancient environment would have been,” he said. “Are you looking at ancient marsh, lake, seashore or river floodplain? Those are basic skills associated with areas like sedimentology and stratigraphy.”

In addition to work in the field domestically and internationally, the David B. Jones Fellows studying with Beard will be trained in the full “assembly line” of paleontological research, including restoration of fossils, and learning how to mold and cast fossil specimens. The training will be carried out under guidance from David Burnham, preparator at KU’s Natural History Museum. Further, with KU’s Oscar Sanisidro, the fellows will learn techniques of scientific illustration.

A key goal of the grant is facilitation of student publishing of findings in peer-reviewed journals.

“We want to stimulate scholarly research on part of the graduate students,” Beard said. “KU paleontology already has a great reputation, but we want to push it to the top of the mountain nationally, and one way is to have graduate students publishing scholarly work and giving presentations at conferences. In this grant, there’s funding to support that as well.”

“It’s something I faced as a graduate student,” Beard said. “I wound up learning a lot about research, but nobody taught me anything about how to teach. Skills in basic pedagogy are too often lacking in an overall graduate curriculum.”

Finally, the students will develop and lead outreach programs and events at KU’s Natural History Museum to engage the public and young people. Public outreach is a key goal of the David B. Jones Foundation, with its mission to further “educational, research and charitable activities working in the science of paleontology who primarily promote those activities within the United States of America.”

“David B. Jones was an amateur paleontologist who was involved in using fossils to get kids interested in science in general,” Beard said. “For instance, he was active in the Boy Scouts. I think this lines up so well with the agenda of the foundation.”

Photos: K. Christopher Beard, KU Foundation Distinguished Professor, and a student work at a field site in Turkey. Eocene rock outcrops yield fossils at these sites. Photos by Gregoire Metais. Portrait of K. Christopher Beard by KU Marketing Communications. Illustration: A reconstruction of the animals and environment of the ancient Pontide region, by Oscar Sanisidro.