LAWRENCE — One consequence of global climate change is the likelihood of more extreme seesawing between drought and flood, a phenomenon dubbed “weather whiplash.” 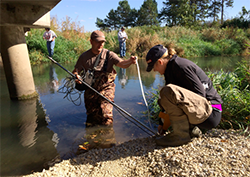 Now, researchers at the University of Kansas have published findings in the journal Biogeochemistry showing weather whiplash in the American Midwest’s agricultural regions will drive the deterioration of water quality, forcing municipalities to seek costly remedies to provide safe drinking water to residents.

“As rainfall patterns change with climate change, it’s predicted there will be more times of drought, and more times of excessive rainfall — really big storms,” said Terry Loecke, assistant professor of environmental studies at the University of Kansas and lead author of the new investigation.

Loecke and co-author Amy Burgin, associate professor of environmental studies, said the extreme flux between drought and rainfall changes the storage of nutrients in the agricultural landscape — nitrogen used in fertilizing farms most importantly. 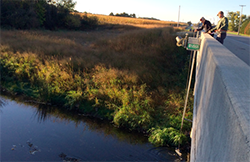 “Farmers put on their normal amount of fertilizer, but when we have a drought, plants don’t grow as big and don’t take up as much nitrogen,” Loecke said. “Instead of going into the plants, which would be harvested, it stays in the soil — and no water is flushing it away.”

But when floods occur, nitrogen is washed into surface waters such as tributaries that feed into rivers.

“The soil is like a sponge, and when it’s dry the nitrogen stays put,” Burgin said. “But as soon as you wet it, like when you wring a sponge, the nitrogen can flood into the rivers.”

Because many of these rivers supply drinking water for communities throughout middle America, remediating high loads of nitrogen will stress taxpayers as water departments are forced to build new facilities to eliminate nitrogen from municipal water supplies.

The team took a close look at a 2012-2013 drought and flood cycle that affected much of the Midwestern U.S., leading to a nitrogen spike in surface waters.

“We looked at observations of the 2012 drought that ended in a flood and asked how frequently that has occurred across upper Midwest across in the last 10-15 years,” Loecke said. “We found that the connection between drought-to-flood conditions and high nitrate was pretty common.”

Indeed, skyrocketing nitrate levels in the Des Moines and Raccoon rivers forced the Des Moines Water Works to construct a $4.1 million nitrate removal plant that costs $7,000 per day to operate.

“The drinking water is a real problem, especially in Des Moines,” Burgin said. “It has one of most expensive nitrate-removal facilities that we know about. In recent years, they’ve been running it from 25 to 150-plus days each year. That’s really adding up, because the money isn’t in the budget they have to spend to get clean drinking water to citizens.”

According to Loecke and Burgin, who both also serve as scientists with the Kansas Biological Survey, surface-water nitrate spikes like the ones plaguing Iowa will occur more widely throughout the agricultural Midwest as weather whiplash becomes more commonplace in the region.

“The average person will pay more to have clean drinking water, like in the city of Des Moines,” Loecke said. “A city can’t predict how many days they’ll have to run a nitrate-removal facility. When they run it a lot, it’s a huge hit to their budget, and they have to pass it on to their citizens, and it will spread out to rest of the Midwest. Midwesterners will have to pay more for drinking water going forward.”

Loecke and Burgin said they hoped their research could help inform farmers, policymakers, water departments and the general public.

“Municipal water services should be paying attention,” Burgin said. “Iowa is the bull's-eye of this problem, and it’s going to spread out from there — this might not be at the forefront of a lot of Kansas minds right now. But given it’s an agricultural state, it’s a matter of time before we’re in same boat. In Iowa, now it’s hitting smaller municipalities. According to analysis by the Des Moines Register, 30 percent of them will have this problem — and most don’t have the tax bases to support huge nitrate-removal facilities.”