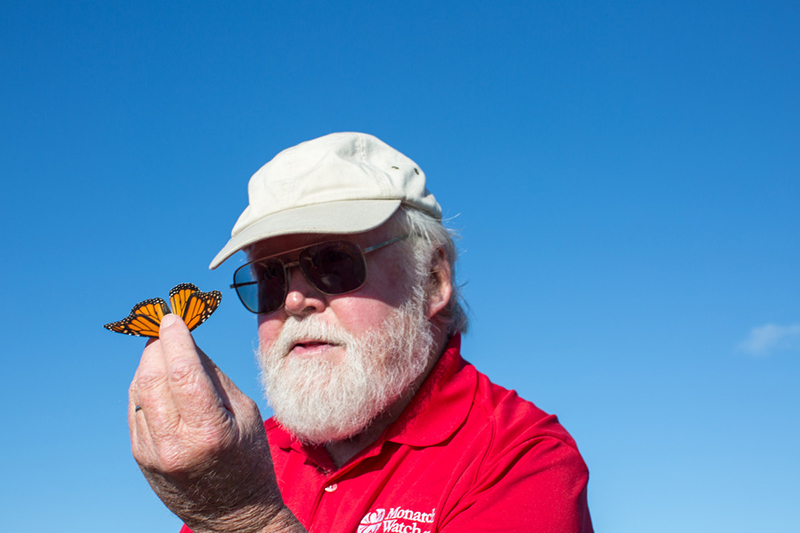 LAWRENCE — Orley “Chip” Taylor, founder and director of Monarch Watch and longtime professor at the University of Kansas, was recently named an honorary member of The Garden Club of America (GCA), one of its highest accolades.

Taylor was a professor in the Department of Ecology & Evolutionary Biology at KU for 48 years. He founded Monarch Watch in 1992 as a collaborative network of students, teachers, volunteers and researchers dedicated to the study and conservation of the monarch butterfly. A core feature of Monarch Watch is its tagging program during the fall, when monarchs migrate from North American breeding grounds to a tiny area in the Transvolcanic mountains west of Mexico City.  Since 1992, more than 1.4 million monarchs have been tagged by volunteers, and more than 17,000 of the tagged butterflies have been recovered.

Taylor was among the first to recognize the alarming decline of the monarch, and his response was to mobilize the American public to meaningful action in one of the earliest and most successful citizen science efforts, according to the GCA.

In 2005, Monarch Watch created the Monarch Waystation program, recognizing that monarch habitat is declining at a rate of 6,000 acres per day in the United States. The goal of the program is to inspire communities to create habitats for monarch butterflies and to assist Monarch Watch in increasing awareness of the decline in resources for monarchs, pollinators and all wildlife that share the same habitats. To date, more than 16,000 Monarch Waystations have been registered by gardeners across the country.

“Taylor has placed conservation and the survival of the monarch in the hands of every North American who owns or tends to a plot of land, regardless of its size or purpose. This compelling conservation initiative has redefined gardening into being essential to the survival of an iconic butterfly,” said the GCA. “He has demonstrated that if we work together, we can achieve almost any conservation goal we take on.”

An outgrowth of the Monarch Waystation program is the Bring Back the Monarchs campaign, with a goal to restore 20 milkweed species used by monarch caterpillars as food to their native ranges throughout the United States and to encourage the planting of nectar-producing native flowers that support adult monarchs and other pollinators.

Monarch Watch also provides a variety of learning materials for classrooms and guides for Master Gardeners and others in the construction and maintenance of butterfly gardens.

Trained as an insect ecologist at the University of Connecticut, Taylor researched reproductive isolating mechanisms in sulfur butterflies, reproductive and life history patterns in plants, and comparative biology of European and Neotropical African honey bees, as well as migratory behavior of monarch butterflies. He authored or co-authored more than 50 scientific papers and has presented numerous invited seminars at universities and more than 100 talks to non-university groups.

He has assisted with the production of at least 35 documentary films about African bees and monarch butterflies, most notably with the National Geographic Society and Disney. He also served on the scientific advisory team for the documentary “Flight of the Butterflies,” released in IMAX by the Smithsonian Institution in 2012.

Recipient of many awards, Taylor has been recognized by the Kansas Honey Producers Association and The Lepidopterists’ Society and received the 2002 James I. Hambleton Memorial Award for research excellence from the Eastern Apicultural Society; the 2014 Growing Green Pollinator Protector Award from the Natural Resources Defense Council and the Berkeley Food Institute; and a 1998 University of Kansas Wally and Marie Steeples Faculty Award for outstanding service to Kansans. He also is an honorary national director of Wild Ones.

The GCA is a nonprofit national organization composed of 200 clubs with some 18,000 members who devote energy and expertise to projects in their communities and across the United States.