LAWRENCE — Popular culture for several decades has focused on the ancient Minoan culture on Crete as a matriarchy, despite skepticism from the academic world.

A University of Kansas researcher, however, in a recent publication has analyzed several pieces of archaeological evidence and art from the island and how they might support the idea that Minoan women ruled the ancient civilization.

"Basically, this culture on Crete around 1600-1500 BCE is the closest candidate for a matriarchy that we have. That's huge," said John Younger, KU professor of classics. 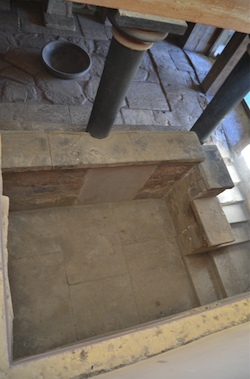 Younger, who has studied the Minoan culture for decades, said women figured prominently in art and religious artifacts and therefore probably in the administration of the Bronze Age civilization as well.

For example, women are always clothed, while males may be nude, and paintings depict women in elaborate court-style dress.

"In this culture, at this time, we have an awful lot of representations of what are obviously powerful women, single seated women flanked by a bunch of guys," he said. "We don't have a single representation of a seated man."

Almost all information about Minoan women comes from art, such as figurines, seal stones and finger rings, pottery and fresco. His article "Minoan Women" appeared recently in the volume "Women Antiquity, Real Women across the Ancient World." The book summarizes 40 to 50 separate pieces of evidence.

"It's one day in the life of a Minoan woman," Younger said.

Women participated in activities that contemporary cultures often depicted for men, like bearing weapons as hunters and the use of swords and bows.

One main piece of archaeological evidence he uses to argue for a Minoan matriarchal culture is the presence of large pits that appear to be shrines, called "lustral basins," in the middle of their palaces or large halls. Their makeup seems to match what anthropologists often call a "menstrual pit." 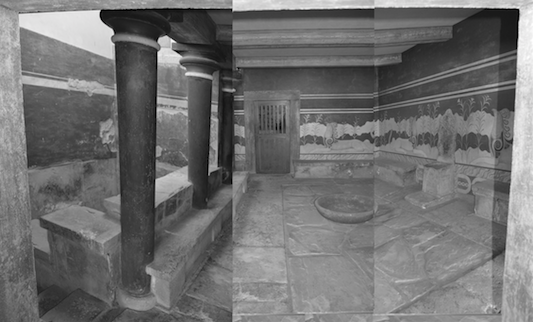 However, in most ancient cultures, such pits are removed from the town village or often put away into a special house, indicating women were often ostracized until their menstruation period ended.

"They're not putting them off into some house on the outskirts of the village," Younger said.

A wall painting above one of these lustral basins also shows a girl turning toward a shrine dripping in blood, he said, inducing the cultural significance of those pits.

Researchers have long struggled to definitively put together what actually happened in the Minoan culture on Crete for several reasons, including a lack of texts written in a language that we can understand.

"We have texts, but we can't read them," Younger said. "The height of this culture lasted 150 years maximum, and then about 1500 BCE, there was destruction all across the island."

The Mycenaean culture of the mainland eventually conquered the Minoan culture on the island, but Younger is researching another theory that the matriarchal Minoan society experienced a revolt either before or in anticipation of the Mycenaean takeover.

Because basically every site, including farms and houses, on the island except for the palace itself at Knossos was destroyed, he speculates it was the work of a revolution or people destroying their own property as a revolt against the matriarchal system.

"Some of these were huge buildings, about the size of Wescoe Hall (at KU), and an army would have to know where every site on the island is," Younger said. "Further, an invading army likely wouldn't have time to destroy everything like that."

He said art depictions of the Minoan society also show the women wearing saffron colored clothing, which is derived from autumn crocus flower. Saffron is also a source of vitamin A, and in paintings women have the blue streaks in their eyes while the men's eyes have red streaks, possibly indicating they were deprived of vitamin A. Possibly this could have made the men angry and driven them to revolt, Younger said.

As a matriarchal culture, it would make the Minoans unique, especially in the respect of the women being shown in important positions.

"It gives us a glimpse of what could be different," said Younger, who is also KU's Director of Jewish Studies. "Back in the 1970s when feminism was beginning to take hold, a lot of feminist scholars looked to the ancient Greek culture and its powerful women in plays and media. Many of us began to realize that on the island of Crete, we have something different than we've ever seen. In the respect of the women being shown in important positions, that's unique."